The planet does not fall far from the star 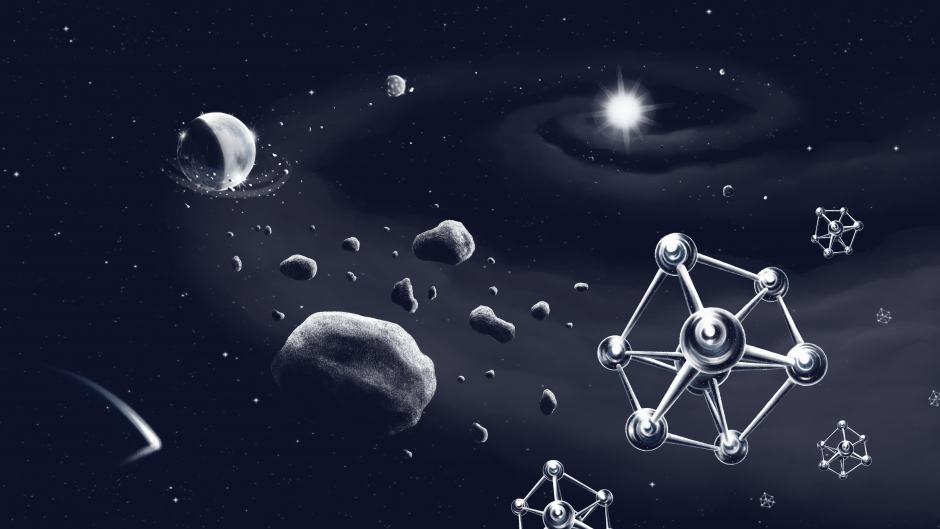 A compositional link between planets and their respective host star has long been assumed in astronomy. For the first time now, a team of scientists, with the participation of researchers of the National Centre of Competence in Research (NCCR) PlanetS from the University of Zurich and the University of Bern, deliver empirical evidence to support the assumption – and partly contradict it at the same time. Illustration of planet formation around a Sun-like star, with the building blocks of the planets – rocks and iron molecules – in the foreground. Credit: Tania Cunha (Planetario do Porto – Centro Ciência Viva & Instituto de Astrofísica e Ciências do Espaço)

Stars and planets are formed from the same cosmic gas and dust. In the course of the formation process, some of the material condenses and forms rocky planets, the rest is either accumulated by the star or becomes part of gaseous planets. The assumption of a connection between the composition of stars and their planets is therefore reasonable and is confirmed, for example, in the solar system by most rocky planets (Mercury being the exception). Nevertheless, assumptions, especially in astrophysics, do not always prove to be true. A study led by the Instituto de Astrofísica e Ciências do Espaço (IA) in Portugal, which also involves researchers from the NCCR PlanetS at the University of Zurich and the University of Bern, published today in the journal Science, provides the first empirical evidence for this assumption – and at the same time partially contradicts it.

Christoph Mordasini is a lecturer of astrophysics at the university of Bern and member of the NCCR PlanetS. Credit: UBE

To determine whether the compositions of stars and their planets are related, the team compared very precise measurements of both. For the stars, their emitted light was measured, which bears the characteristic spectroscopic fingerprint of their composition. The composition of the rocky planets was determined indirectly: Their density and composition were derived from their measured mass and radius. Only recently have enough planets been measured so precisely that meaningful investigations of this kind are possible.

“But since stars and rocky planets are quite different in nature, the comparison of their composition is not straightforward”, as Christoph Mordasini, co-author of the study, lecturer of astrophysics at the university of Bern and member of the NCCR PlanetS begins to explain. “Instead, we compared the composition of the planets with a theoretical, cooled-down version of their star. While most of the star’s material – mainly hydrogen and helium – remains as a gas when it cools, a tiny fraction condenses, consisting of rock-forming material such as iron and silicate. Using a model we developed, we were able to calculate the composition of this rock-forming material of the cooled-down star. We then compared that with the rocky planets,” Mordasini says.

Indications of the habitability of planets Vardan Adibekyan is a researcher at the Instituto de Astrofísica e Ciências do Espaço in Portugal. Credit: IA

“Our results show that our assumptions regarding star and planet compositions were not fundamentally wrong: the composition of rocky planets is indeed intimately tied to the composition of their host star. However, the relationship is not as simple as we expected”, lead author of the study and researcher at the IA, Vardan Adibekyan, says. What the scientists expected, was that the star’s abundance of these elements sets the upper possible limit. “Yet for some of the planets, the iron abundance in the planet is even higher than in the star” as Caroline Dorn, who co-authored the study and is a member of the NCCR PlanetS as well as Ambizione Fellow at the University of Zurich, explains. “This could be due to giant impacts on these planets that break off some of the outer, lighter materials, while the dense iron core remains”, according to the researcher. The results could therefore give the scientists clues about the history of the planets. Caroline Dorn is a member of the NCCR PlanetS and Ambizione Fellow at the University of Zurich. Credit: UZH

“The results of this study are also very useful to constrain planetary compositions that are assumed based on the calculated density from mass and radius measurements”, Christoph Mordasini explains. “Since more than one composition can fit a certain density, the results of our study tell us that we can narrow potential compositions down, based on the host star’s composition”, Mordasini says. And since the exact composition of a planet influences, for example, how much radioactive material it contains or how strong its magnetic field is, it can determine whether the planet is life-friendly or not.

Publication details: A compositional link between rocky exoplanets and their host stars