Home  ›  External Newsletter  ›  Did Venus ever have oceans?

Did Venus ever have oceans? 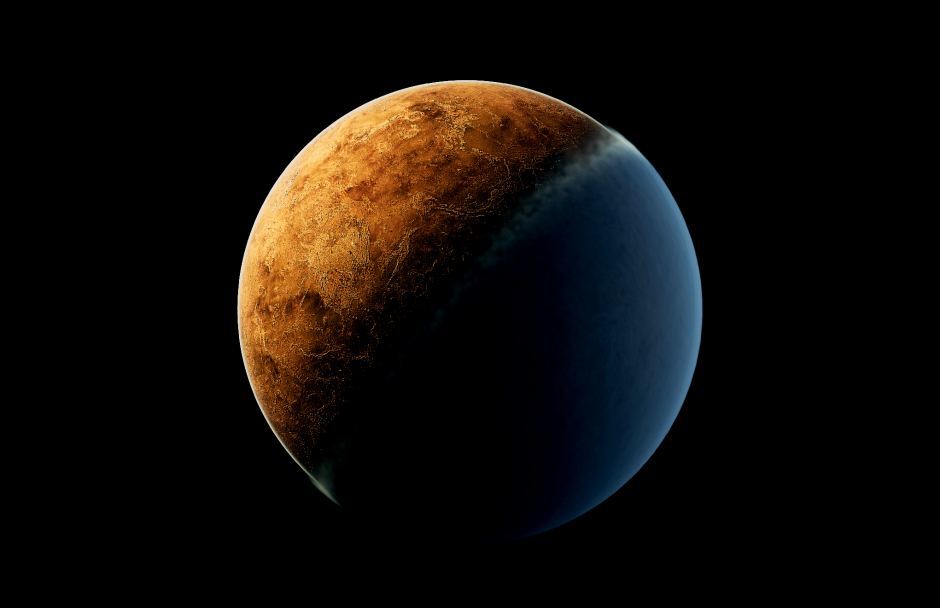 Today’s Venus, with its extreme greenhouse effect, could be considered Earth’s “evil twin”. Yet in its past, it may have been much more hospitable and possibly even had oceans of water. Researchers led by the University of Geneva and the National Centre of Competence in Research (NCCR) PlanetS have simulated the ancient climate of Venus to investigate the existence of Venusian oceans, in a new study to appear in Nature. Artistic illustration of early Venus with a cloud-free dayside and clouds on the nightside, keeping the planet hot. Credit: Tobias Stierli/Flaeck

In some ways, you could call Venus “Earth’s evil twin”. It is of comparable mass and size as our home planet, similarly consists mostly of rocky material, holds some water and has an atmosphere. Someone looking at the two planets from afar might very well mistake them. Yet, a closer look reveals striking differences: the thick CO2 atmosphere, extreme surface temperature and pressure as well as the sulphuric acid clouds on Venus are a hellish contrast to the life-friendly conditions on Earth. This may, however, have not always been the case. Previous studies have suggested that in its past, Venus may have been a far more hospitable place, with oceans of its own. Whether the history of our planet’s twin indeed exhibited such mild periods or has always been “evil”, was investigated by a team of researchers led by the University of Geneva and the NCCR PlanetS. Their results were published today in the scientific journal Nature.

A planet in demand Martin Turbet is a postdoctoral researcher at the University of Geneva, a member of the NCCR PlanetS and a European Marie Curie fellow.

Venus has recently become an important research topic for astrophysicists. ESA and NASA have decided this year to send no less than three space exploration missions over the next decade to our twin planet within the next decade. Among the key questions these missions aim to answer is the past existence of oceans. An international team of researchers, led by Martin Turbet, a researcher at the University of Geneva and member of the NCCR PlanetS, have tried to answer this question with the tools available on Earth. “We simulated the climate on Earth and Venus from the very early phase of their evolution, more than four billion years ago. Back then, the surfaces of both planets were still molten lava. The associated high temperature meant that any water would have been present in the form of steam back then – as in a gigantic pressure cooker”, Turbet explains. Using sophisticated three-dimensional models of the atmosphere, similar to those scientists use to simulate the Earth’s current climate and future evolution, the team studied how the atmospheres of the two planets would evolve over time and whether oceans could form in the process. Emeline Bolmont is a professor of astrophysics at the University of Geneva University and member of the NCCR PlanetS.

“Thanks to our simulations, we were able to show that the climatic conditions did not allow water vapour to condense in the atmosphere of Venus”, says Martin Turbet. This means that the temperatures never got low enough for the water in its atmosphere to form raindrops that could fall on its surface. Instead, water remained as a gas in the atmosphere and oceans never formed. “One of the main reasons for this is the clouds that form preferentially on the night side of the planet. These clouds cause a very powerful greenhouse effect that prevented Venus from cooling as quickly as previously thought”, continues the Geneva researcher. David Ehrenreich is a Professor of Astronomy at the University of Geneva and a member of NCCR PlanetS.

Surprisingly, the astrophysicists’ simulations also reveal that the Earth could easily have suffered the same fate as Venus. If the Earth had been just a little closer to the Sun, or if the Sun had shone as brightly in its ‘youth’ as it does nowadays, our home planet would look very different today. It is likely the relatively weak radiation of the young Sun that allowed the Earth to cool down enough to condense the water that forms our oceans. For Emeline Bolmont, professor at UNIGE, member of PlaneS and co-author of the study, “this is a complete reversal in the way we look at what has long been called the ‘Faint Young Sun paradox’. It has always been considered as a major obstacle to the appearance of life on Earth! ” The argument was that if the Sun’s radiation was much weaker than today, it would have turned the Earth into a ball of ice hostile to life. “But it turns out that for the young, very hot Earth, this weak Sun may have in fact been an unhoped-for opportunity,” continues the researcher.

“Our results are based on theoretical models and are an important building-block in answering the question of the history of Venus”, says study co-author David Ehrenreich, professor in the Department of Astronomy at UNIGE and member of the NCCR PlanetS. “But we will not be able to rule on the matter definitively on our computers. The observations of the three future Venusian space missions will be essential to confirm – or refute – our work”.