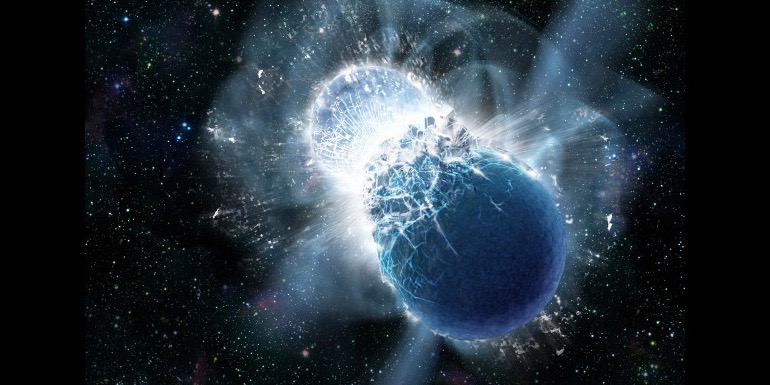 Please register here: CSH Distinguished Lecture 2018
Participation is free of charge. The lecture will be followed by an Apero.

Abstract
The much-anticipated joint detection of gravitational waves and electromagnetic radiation was achieved for the first time on August 17, 2017, for the binary neutron star merger GW170817.
This event was detected by Advanced LIGO/Virgo, gamma-ray satellites, and dozens of telescopes on the ground and in space spanning from radio to X-rays.
In these talks I will describe the exciting discovery of the optical counterpart, which in turn led to several detailed studies across the electromagnetic spectrum. The results of the observations carried out by our team include the first detailed study of a “kilonova”, an optical/infrared counterpart powered by the radioactive decay of r-process nuclei synthesized in the merger, as well as the detection of an off-axis jet powering radio and X-ray emission. These results provide the first direct evidence that neutron star mergers are the dominant site for the r-process and are the progenitors of short GRBs. I will also describe how studies of the host galaxy shed light on the merger timescale, and describe initial constraints on the Hubble Constant from the combined GW and EM detection.

Profile of the speaker
Edo Berger is a professor of astronomy at Harvard University. He received his B.S. degree in astrophysics from the University of California, Los Angeles in 1999, and his Ph.D. from the California Institute of Technology in 2004. His doctoral thesis was awarded the 2007 Robert J. Trumpler Award for an Outstanding PhD Thesis. Prior to his arrival at Harvard in 2008, Prof. Berger was a Hubble and Carnegie/Princeton Postdoctoral Fellow from 2004-2008. Prof. Berger and his group research a wide range of explosive astrophysical phenomena, including the electromagnetic counterparts of gravitational wave sources, using observations across the spectrum, from radio waves to gamma-rays.