Getting close to space at the Night of Research 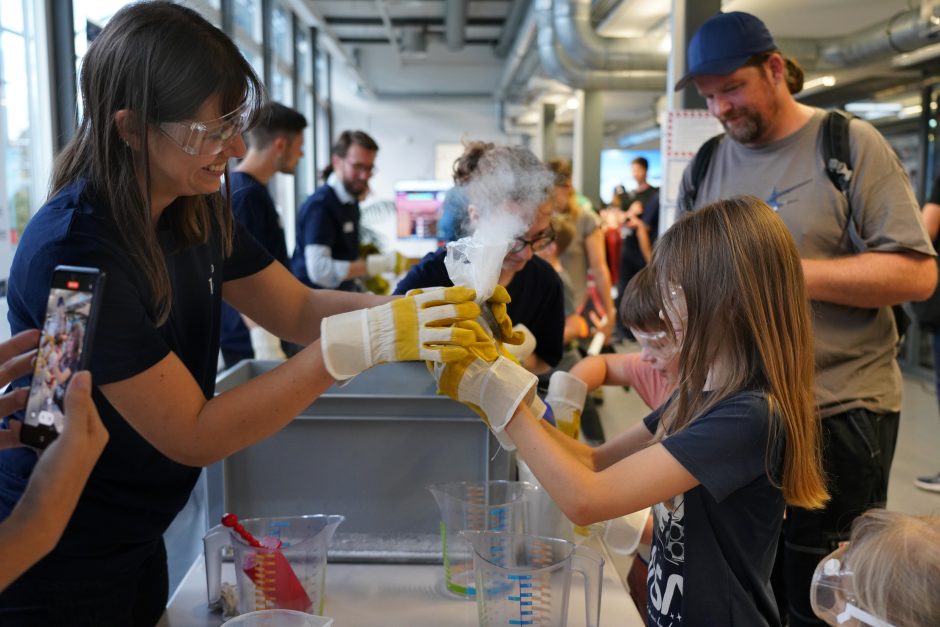 Last Saturday, the fourth “Night of Research” took place at the University of Bern. Members of the National Centre of Competence in Research (NCCR) PlanetS were also there and took visitors on a voyage of discovery into space. 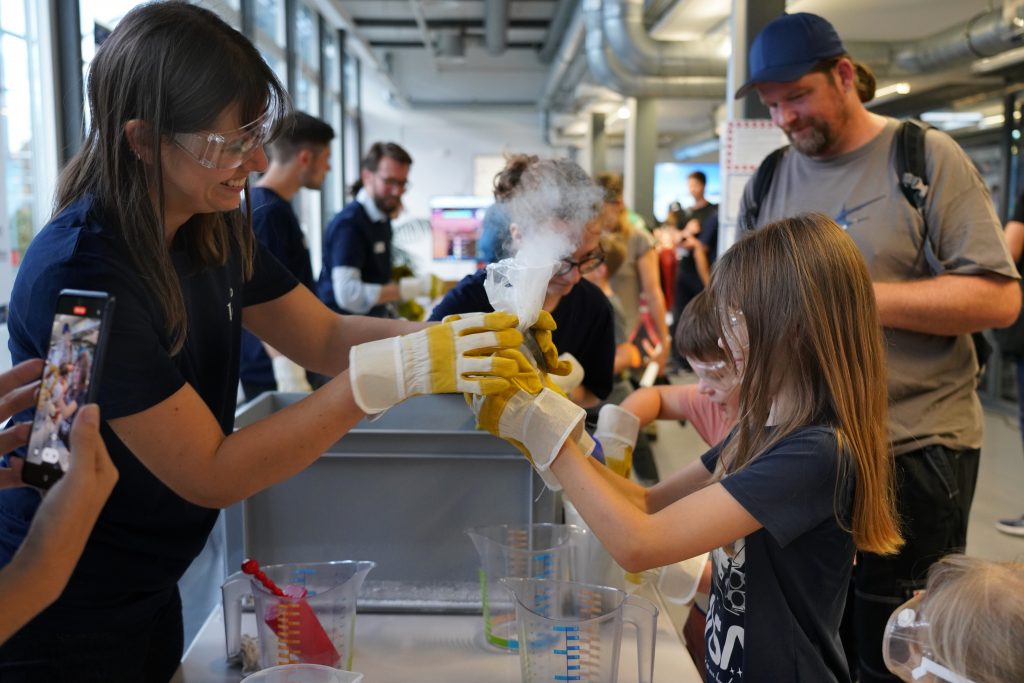 Young visitors make their own “comets” under the guidance of researchers at the Night of Research. Photo: Guido Schwarz

“My comet stinks,” exclaimed a young visitor in amazement, pointing to the mass of humus soil, dry ice and soy sauce she had just made. “That’s right,” replied Martin Rubin, who researches comets at the University of Bern. “Thanks to the Rosetta mission, we know that there is an abundance of organic molecules on real comets. Therefore, they might actually stink!”

At the Night of Research, what can otherwise only be viewed from a distance suddenly became tangible for visitors. Alltogether around 10,000 people visited this year’s “Knowledge Fair”, where more than 750 researchers shared their knowledge at over 70 stands. Among them were numerous members of the National Centre of Competence in Research (NCCR) PlanetS, who gave the public all kinds of interesting information on topics related to space research. The space exhibition was organized by the Center for Space and Habitability (CSH), under the responsibility of Sophie Krummenacher, Guido Schwarz and Yann Alibert.

Of asteroid impacts, molecules of life and distant planets

In the large lecture hall on the ground floor of the Exact Sciences building, members of the NCCR PlanetS gave short presentations on topics including the history of exoplanet research, the search for the building blocks of life in space and research missions in the solar system. Audrey Vonburger, for example, explained to the interested audience why the upcoming ESA JUICE mission is flying to the icy moons of Jupiter: “We have known for about 25 years that there is liquid water under the kilometre-thick ice crust of these icy moons. The big question is therefore whether life is possible or even exists there,” says the researcher. 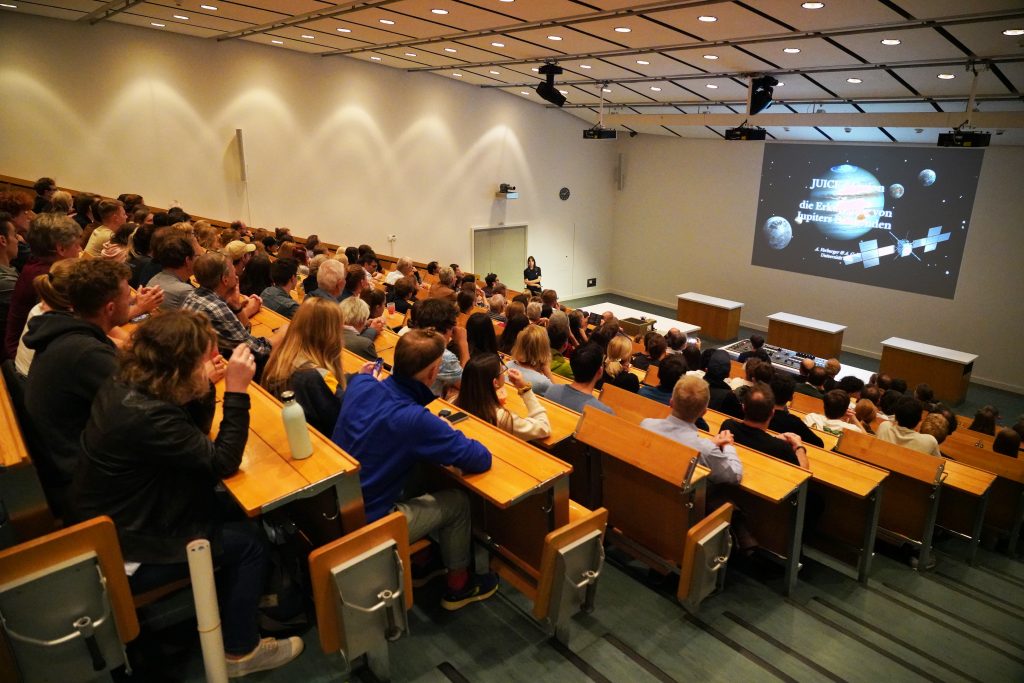 Audrey Vorburger tells the audience about the icy moons of Jupiter and the ESA space probe that will soon be flying there. Picture: Guido Schwarz

Spread throughout the building, visitors could marvel at numerous exhibits, such as a full-size model of the CHEOPS space telescope, a stereo camera of the ExoMars and measuring instruments from the BepiColombo missions. Many took the opportunity to put on a real cleanroom suit that engineers wear when designing the sensitive devices. 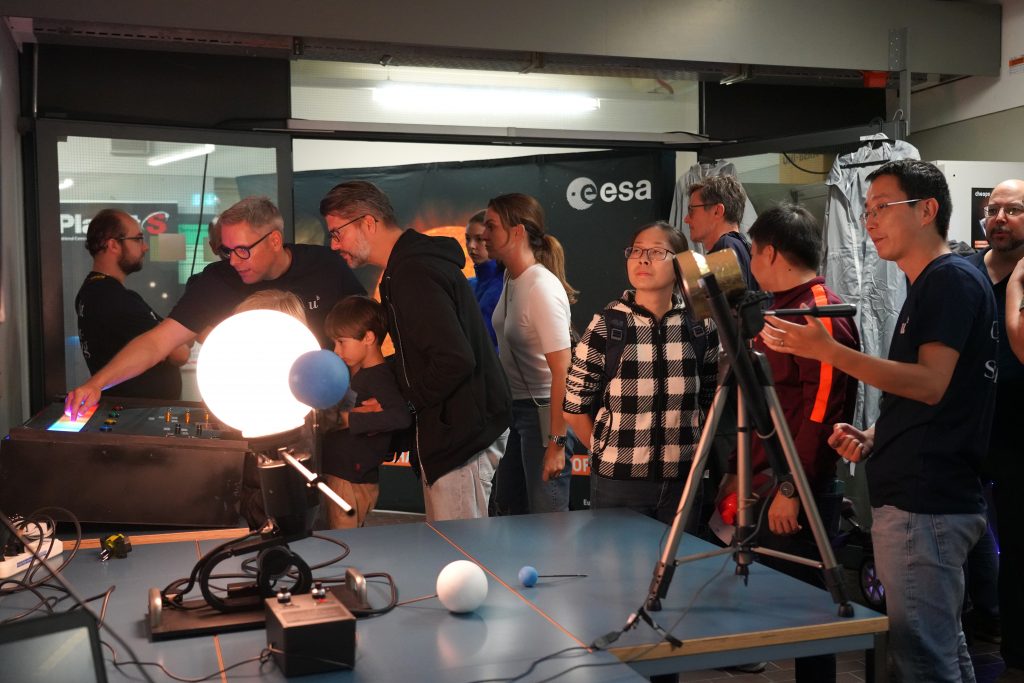 Visitors to the Night of Research at the University of Bern learn how distant exoplanets and their stars are studied by means of an experiment. Image: Guido Schwarz

In various experiments, the visitors were shown how the researchers work. For example, they could learn how distant exoplanets and their stars are studied by means of star and planet models with the corresponding measuring equipment. Elsewhere, the public could have mini-asteroids smashed into flour-filled vessels and then have researchers explain exactly what happens during such an event. The homemade “comets” made of humus soil, soy sauce and dry ice were a particular hit with the younger audience, who were also taught about the next ESA comet mission „Comet interceptor“ with Bernese participation. 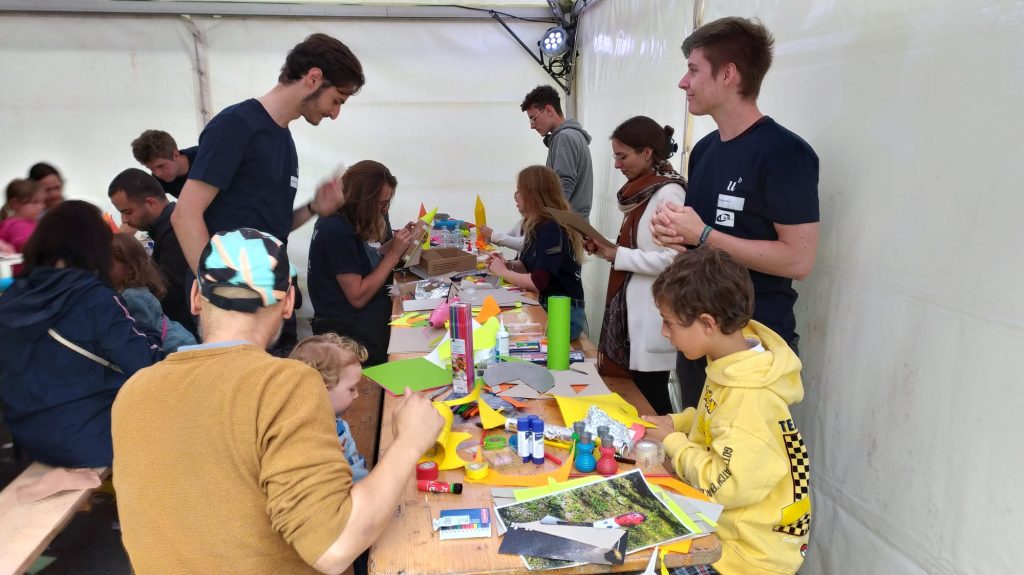 The audience could build water rockets out of plastic bottles and then launch them. Polymechanics apprentices shared their know-how with them. Picture: Isabelle Vannotti

And of course the self-made rockets and the view through special solar telescopes also were very popular. The Astronomische Gesellschaft Bern (AGB) and the Astronomische Jugendgruppe Bern (AJB) were a great help here.

Globi is also fascinated by space 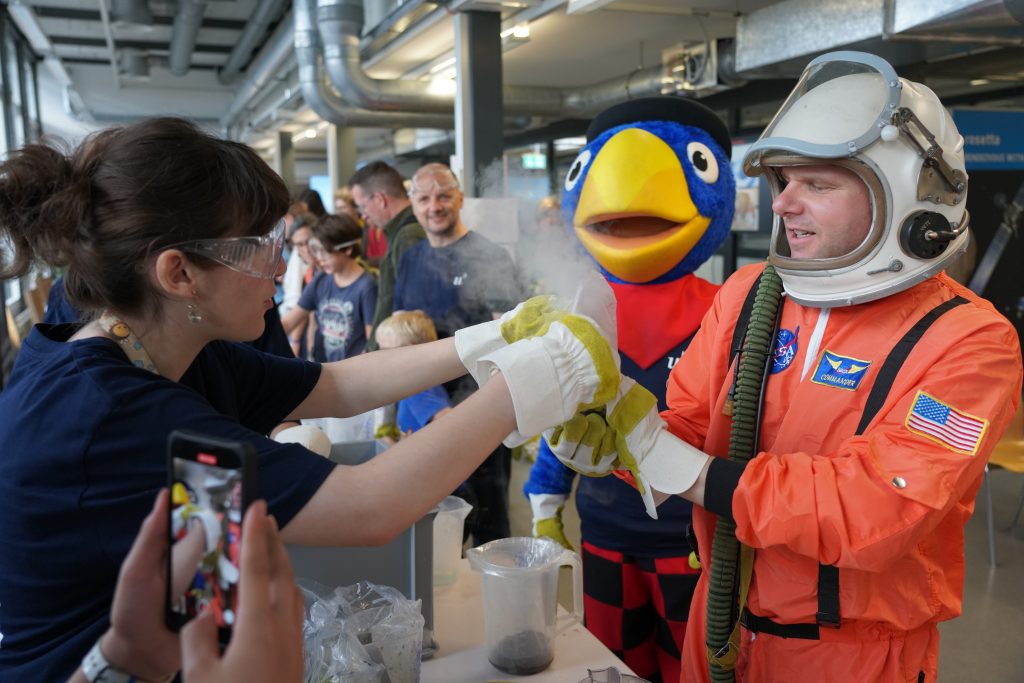 Globi and his astronaut companion don’t miss the opportunity to make their own comet. Picture: Guido Schwarz

Globi was among the fascinated visitors: the cheeky and inquisitive bird spent plenty of time at the University of Bern in recent weeks, learning a lot about outer space. He has compiled his collected impressions in the knowledge book “Globi in Space”, which will be available for purchase in all bookshops or at www.globi.ch from spring 2023.