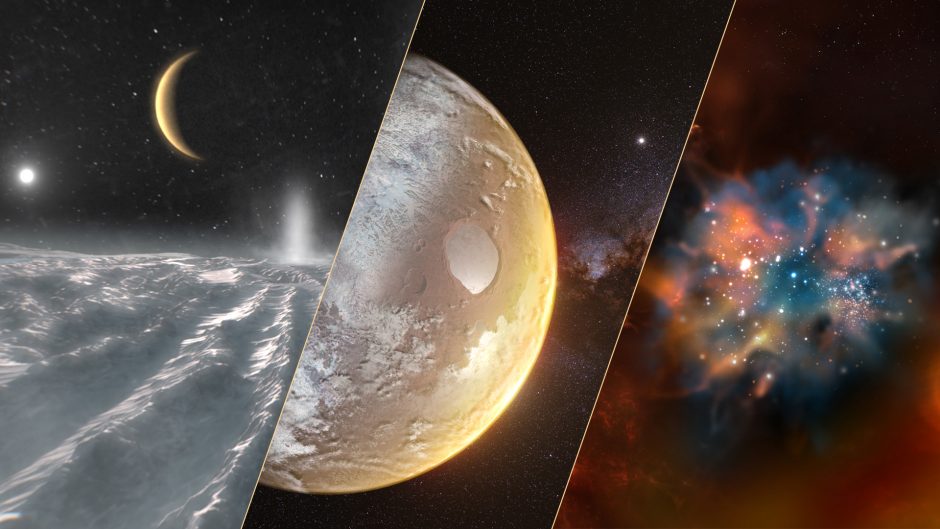 This year, the European Space Agency (ESA) chose the themes for its large-class science missions for the timeframe 2035-2050. Two of the three chosen themes are ones that the Swiss National Centre of Competence in Research (NCCR) PlanetS is actively involved in with promising projects. Artist impressions of the themes proposed for ESA’s next series of Large-class missions, as part of the Voyage 2050 plan. Credit: ESA

If you had a budget of 1 billion €, where would you go? The Bahamas? The ISS? Perhaps the Moon or even a distant planet? Over the last two years, ESA has asked itself this very question. From the nearly 100 ideas for scientific investigations that were proposed 2 years ago, the agency has chosen three possible answers: the moons of Jupiter and Saturn, temperate climate exoplanets and the milky way, as well as new physical probes of the early Universe. The first two themes the NCCR PlanetS already pursues with concrete plans and projects. Europa and Enceladus, the icy moons of Jupiter and Saturn. Image: NASA

When we talk about extraterrestrial life in the Solar System, Mars is usually at the top of the list. More recently, Venus has also gotten a lot of attention, when a potential detection of Phosphine – a possible indicator of biological activity – was reported in its atmosphere. Yet, some of the most promising candidates for habitable worlds in our immediate neighbourhood aren’t planets at all. They are moons.

Since the discovery of global oceans on Jupiter’s moon Europa and Saturn’s moon Enceladus by the Galileo and Cassini missions, these two bodies have increasingly become the focus of the search for extraterrestrial life for researchers. But their oceans are hidden under kilometers of ice. If there are any signs of living organisms, they will be difficult to find. The ORIGIN instrument in the test system, simulating space conditions, and its developer, Andreas Riedo, researcher at the University of Bern and member of the NCCR PlanetS. Image: Vera Knöpfel

Luckily, through its members Andreas Riedo and Niels Ligterink of the University of Bern, the NCCR PlanetS is involved in the development of the most sensitive instrument in the search for life: the ORganics Information Gathering INstrument (ORIGIN). Thanks to its ingenious design, the instrument can detect and identify the faintest traces of life: “ORIGIN directs laser pulses at small samples of material that can be taken from the surface of a moon, for example. In the process, the material is ionized and becomes gaseous. The chemical composition of the gaseous sample can be analyzed directly with our mass spectrometer”, as Niels Ligterink explains. Andreas Riedo adds: “The compelling aspect of our technology is that no complicated sample preparation techniques, which could potentially affect the result, are required.” Niels Ligterink is a postdoctoral researcher at the University of Bern and a member of the NCCR PlanetS. Image: Courtesy of Niels Ligterink

In its most recent version, the instrument can also perform these measurements at very low temperatures “It does so, by sublimating the ices during the measurement process”, Ligterink says. An important enhancement for finding life on a frozen world. Unlike previous instruments for life detection in space, ORIGIN can recognize many types of biomolecules. As of yet, it has been tested with amino acids, lipids and so-called polycyclic aromatic hydrocarbons. And it can do so, not just in the lab, but also under natural conditions: “We have already been able to detect biomolecules from samples of complex permafrost, which are surfaces that we would expect in similar form on the icy moons”, Riedo points out and adds: “The measurement capabilities and sensitivity of ORIGIN therefore substantially outperform previous space instruments”.

Unsurprisingly, several private and governmental space agencies have already expressed interest to test their instrument for future missions. With their decision to potentially visit one of the giant planets’ icy moons, ESA might also find use for ORIGIN. “ESA has historically not been very focused on the search for life”, Ligterink points out. But this initiative, the researcher speculates, may change that. “ORIGIN would be up for the task!”, Riedo and Ligterink agree.

Among the themes that ESA selected in its Voyage 2050 process, one may aim for temperate exoplanets – planets outside our Solar system with temperatures similar to that of Earth that could hold liquid water in their atmospheres or on their surfaces.

Characterizing planets light years away is already a difficult task, as PlanetS researchers are well aware.  But temperate terrestrial planets offer a special challenge. Compared to most of the exoplanets characterized to date, they are relatively small and orbit their star from a larger distance. This makes them difficult to study with the most frequently used technique to characterize exoplanet atmospheres – the so-called transit method. It involves analyzing the star’s light, as it passes through the planet’s atmosphere and interacts with the present molecules. The interactions leave their imprints and thus reveal the content of the planet’s atmosphere. But the smaller a planet is, and the farther away from its star, the slimmer the chance of capturing the transit of a planet as well as this atmospheric interaction. Additionally, the very bright light emitted by a star makes it difficult to detect these interactions.

Many life-related molecules – like water, oxygen or methane – also interact with light that has longer wavelengths than the light we can see with our eyes. Objects – such as temperate planets – also strongly emit this infrared light because of their intrinsic temperature. To find signs life on distant planets, it therefore makes more sense to look for this kind of infrared light, emitted by the planets themselves. A conceptual illustration of the LIFE telescopes and the central instrument for combining the beams. Credit: ETH Zurich

This is exactly what the project of the LIFE telescope aims to do. Yet the task is not an easy one. “Infrared light is much harder to detect than the bright light of a star”, Adrian Glauser, who is the lead instrument scientist of the LIFE project and a member of the NCCR PlanetS, explains. For the direct detection of the faint planet emission, a very high spatial resolution is required, which can only be achieved by very large telescopes. And because much of this light is absorbed by the Earth’s atmosphere, the telescope has to be in space. “Unfortunately, telescopes of the size of ESO’s 39-meter “ELT”, currently under construction in Chile, don’t fit on a rocket that could carry it to space,” acting principal investigator of LIFE mission and ETH Professor Sascha Quanz explains with a laugh. That’s why instead of one large telescope, the LIFE mission aims to send a swarm of five smaller telescopes into space. These would then fly in formation and be optically interconnected by a center piece. “This will give us the equivalent spatial resolution of a telescope with a mirror size of up to 200 meters and enable us to detect the very faint infrared light coming from planets”, Glauser says. Adrian Glauser, lead instrument scientist of the LIFE mission with one of the prototype parts, which he and his team are developing. Image: Guido Schwarz

Yet even with this large mirror, the scientists require a clever technique to detect the light coming from the planets: They have to block out the light from the much brighter stars – similar to someone blocking out the Sun with their hand, to see an airplane flying in the sky. Sascha Quanz is a Professor of Astrophysics at the ETH Zurich and a member of the NCCR PlanetS. Image: ETHZ

All of this requires sophisticated technology. Glauser and his team of instrumental scientists have already begun with the development of prototypes. “The challenge is to precisely measure the very faint signal of the infrared radiation of these exoplanets”, Glauser says. One laboratory experiment aims to demonstrate that the light from multiple telescopes can be combined to reach the required measurement performance of such a mission. For this purpose, the experiment will be conducted under cryogenic conditions at temperatures below -200° C, that simulate the conditions in space. As a first step, the team is currently working on a room temperature precursor that supports the development of the various components required for such an ambitious measurement technique.

Although the task is daunting, the stage of the project still early and the timeline requires endurance, Glauser does not shy away. “I am willing to dedicate the rest of my career to this”, he says.  NCCR member, Sascha Quanz, who had suggested the project as one of the Voyage 2050 themes to ESA, adds: “The theme selection is obviously exciting news for the LIFE initiative and an extra boost for our activities!”

With its selection of the Voyage 2050 themes ESA has defined the direction for its largest mission class of the next 30 years. The foresight of NCCR PlanetS researchers allows them to be at the forefront of some of these initiatives.