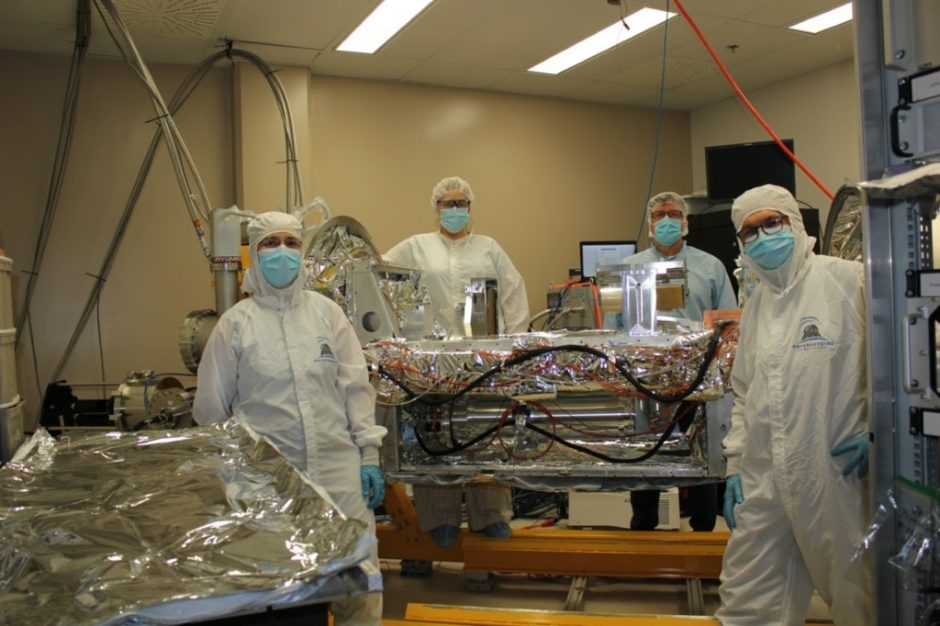 The NIRPS spectrograph optical components has been successfully integrated and aligned into its cryogenic vacuum chamber and delivered its first images in August in the Université Laval’s laboratory. This is an important step before the instrument being installed on the 3.6-m ESO telescope in La Silla, Chile and joining the well-known high-resolution spectrograph HARPS to study exoplanets around low-mass stars.

NIRPS (Near InfraRed Planet Searcher) is a spectrograph built by an international collaboration led by François Bouchy (Université de Genève and member of PlanetS) and René Doyon (Université de Montréal). Operating in infrared light, NIRPS is optimized to study Earth-sized exoplanets orbiting cool stars. A first step in setting up NIRPS was successfully done in end 2019 with the installation at the focus of the telescope of the front optical adapter developed in Geneva and including the adaptive optics module (http://nccr-planets.ch/blog/2020/03/18/nirps-front-end-installed-at-la-silla/). The canadian team closing the cryogenic chamber on July 31 2020, in the laboratories of the Université Laval. (Photo credit: Lison Malo).

The optical components of the spectrograph were assembled and aligned in a cryostat chamber over the spring and part of the summer of 2020 by our Canadian partners at Université Laval laboratories in Quebec. Mechanical positionings of the components were made at room temperature with extremely high precision using 3D measuring machines and considering the expected shrink of the instrument at cryogenic temperature. Since NIRPS operates in infrared light, it is crucial that it is cooled down to about -200 °C, so that it does not itself emit light that would pollute the data. The instrument’s first “thermal cycle” started on July 31th and took 2 weeks to reach the required temperature. We were able to take the first images on the infrared H4RG detector on August 12th using a set of lamps from the calibration unit developed at Bern University. The NIRPS instrument in the Quebec laboratory. The small golden square is a diffraction grating that allows light to be dispersed. The copper plate on the right side hosts the optical fibers that transmit the light to the instrument. In the laboratory, this light is emitted by calibration lamps, but it will be replaced by starlight collected by the telescope. (Photo credit: Lison Malo).

Analysis of the first images shows already that the geometry of the spectra is very close to nominal by comparing with the optical model. Fine tuning and optimization in the detector alignment will be done in the coming weeks. A series of intensive tests in lab will then be executed in order validate the performances of the instrument before passing the acceptance to ship it in La Silla, Chile.