First picture of a planetary system around a Sun-like star 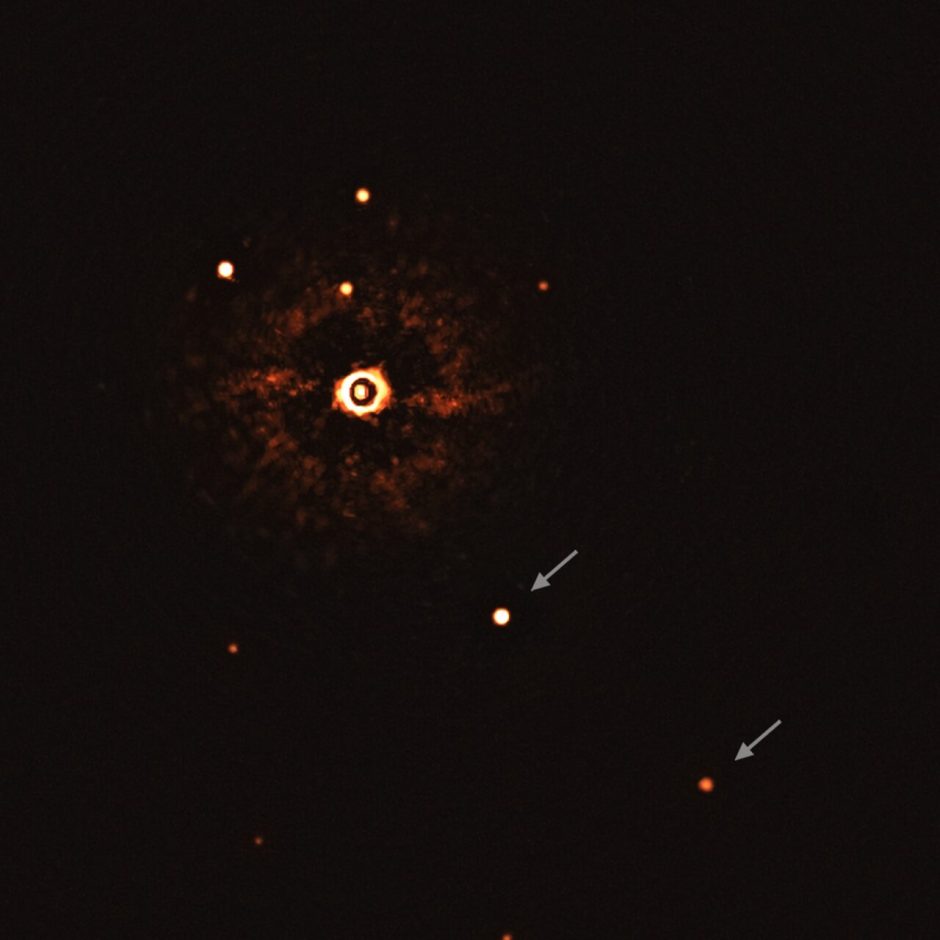 Out of the 4300 exoplanets that have been detected to date, only a few dozen have been detected thanks to direct imaging, i.e. we have been able to physically see a planet around its star in an image. Indeed the star is so bright compared to the planets that it is necessary to use indirect methods to be able to detect them. An example of an indirect method is the radial velocity method used by Michel Mayor and Didier Queloz to discover the first exoplanet or transit method used by the CHEOPS satellite. However and for the first time the SPHERE instrument installed on the European Very Large Telescope of ESO in Chile succeeded in taking an image of a planetary system of two planets around a Sun-like star. An important step for the understanding of multiplanetary systems. The SPHERE instrument is shown shortly after it was installed on ESO’s VLT Unit Telescope 3. The instrument itself is the black box, located on the platform to one side of the telescope itself.

To get a real image of an exoplanet the technique used uses a highly sophisticated method that is implemented in the SPHERE instrument itself installed on the European Very Large Telescope in Chile. “The planets are much less luminous than their stars and very close to them when seen from the Earth. So you need to be able to do two things, suppress the light from the star and get the sharpest possible image to be able to distinguish the planets,” explains Stéphane Udry, co-director of the NCCR PlanetS and co-designer of SPHERE, “and that’s exactly what SPHERE does. It uses an adaptive optics system to get the sharpest possible image by removing the effects of interference from the Earth’s atmosphere ; image which is then coupled to a coronograph, a mask that is used to hide the star and thus make it possible to distinguish any planets that may be close to the star. ».  SPHERE has already been able to photograph planets, but this is the first time that a system of several planets around a solar-type star has been revealed.

The team of researchers led by Alexander Bohn of the University of Leiden in the Netherlands discovered this system during a research program of giant planets around stars like our Sun. Much younger than the Sun, but similar in nature, the star TYC 8998-760-1 is only 17 million years old and is located in the southern constellation of Musca (the fly). Alexander Bohn describes it as “a very young version of our own Sun and which offers us the first moments of a planetary system”.

While old planets, like those in our solar system, are too cold to be flushed out with this technique, young planets are warmer and therefore shine more brightly. By taking several images over the past year, as well as using older data dating back to 2017, researchers have confirmed that the two planets in the image are indeed part of the star system. This image, captured by the SPHERE instrument on ESO’s Very Large Telescope, shows the star TYC 8998-760-1 accompanied by two giant exoplanets, TYC 8998-760-1b and TYC 8998-760-1c. By taking different images at different times, the team were able to distinguish the planets from the background stars.

If the star looks like our sun when it was younger, the system is however very different from ours. The two gas giants are in orbit around their host star at distances of about 160 and 320 times the Earth-Sun distance. These planets are therefore much more distant from their star than Jupiter or Saturn are from the Sun, which are respectively only 5 and 10 times the Earth-Sun distance. The team also discovered that both exoplanets are much more massive than Jupiter, the inner planet having 14 times its mass and the outer one six times.

“Since we are able to obtain an image of a planet with an adaptive optics system, we now need to find a way to obtain the spectrum to enable us the characterization of the planet in question,” explains Christophe Lovis, a member of PanetS. “This is the goal of the RISTRETTO project imagined at the astronomy department of the University of Geneva. It is an independent spectrograph adaptable to any telescope equipped with adaptive optics in the visible”. RISTRETTO will first be tested on the Adaptive Optics of the Swiss telescope Euler at La Silla and, if successful, will be proposed to ESO for installation on Unit 4 of the VLT in Chile. The objective is to be able to analyze the light reflected by “normal” planets, such as Proxima b, the closest exoplanet to the Earth.