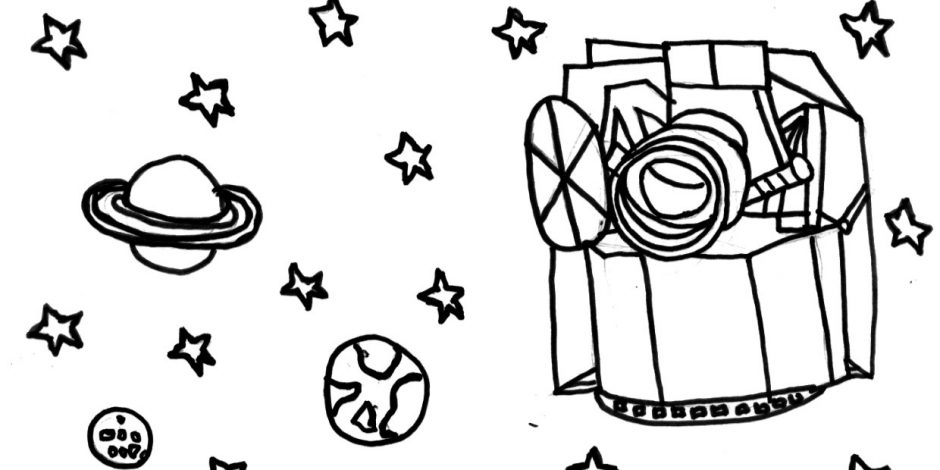 Soon, CHEOPS will launch from Europe’s Spaceport in Kourou, French Guiana, to study exoplanets. The mission is a partnership between Switzerland and ESA’s Science Programme. On board the satellite are two plaques with 2748 miniaturized children's drawings. Some members of the CHEOPS team in Switzerland present themselves and their favourite drawings. One drawing was selected twice. My work duty is the 'CHEOPS Ground Segment Coordinator' and at the same time the 'Development Manager' of the 'Science Operations Centre' hosted at the University of Geneva and developed by a consortium of 9 institutes and companies from 6 ESA member states.

For me, the most interesting thing about my work with CHEOPS are the people I work with. They all have a vastly different cultural, educational and technical background at the same time sharing the same passion for the challenging project that CHEOPS is.

CHEOPS is one of ‘our eyes’ on very distant exo-planets. This is very nicely ‘reflected’ in the drawing I chose - also in the real meaning of the word reflection. I like the multi-dimensional aspect of the drawing by inclosing the whole universe at different scales inside the pupil of a human eye. I am the payload systems engineer on the mission. I take care of all technical aspects of the payload. Simply put, I am making sure the instrument works properly and meets all the specifications. I am as well doing the initial operations together with the operations team once the satellite is flying.

The most interesting thing about the work on CHEOPS was to live through the full design and development phase including flight operations in such a short time. That enables to see the full picture in a very short time. You learn a lot.

The drawing is full of action and life, things that go on. I think it is nice that the young generation or at least part of it see the universe as such an exciting place. Which it indeed is! I work as a software developer in the Science Operations Center (SOC) in Geneva.

On a personal level, the most interesting part is being able to contribute to such an exciting project. The small scale of the project has allowed me to partake in many different aspects of developing the SOC system, which has been a nice experience.

I particularly like the level of detail that has been paid when drawing the CHEOPS satellite. It is a very nice drawing of CHEOPS in-flight! Some colleagues call me the CHEOPS' pilot! I am in charge of producing the sequence of observations that CHEOPS will be executing on-board, based on the observers' input. As the Operations Scientist I make sure that CHEOPS' precious observing time is used as efficiently as possible. Each orbit counts.

My contributions to CHEOPS happen at the interface of the many players of the project, from the scientific community to engineers and space agencies. We have faced a few challenges already, which are stimulating on their own, on a technical level, but it is the human adventure that we are living within our small team that is the most important thing for me on this project.

We are all on the same boat, this beloved pale blue dot, and it is good to see that youngsters do realise this. Besides this drawing shows CHEOPS flying, with its cover opened. Fingers crossed for a successful launch later this year. I am the project manager responsible for the consortium contribution for CHEOPS. That is everything not done by ESA: Instrument development, manufacture, testing, and calibration; The ground segment with mission operations center and science operations center.

The most exciting part so far were the first tests after complete assembly of the instrument - seeing for the first time an image taken by CHEOPS, even if only in the laboratory.

My favourite picture (one of many I like, random really): I like the pose and the overall image composition. Reminds me of the Moon landings. I was working as Instrument Manager.

I was in charge of coordinating the instrument sub-systems that were provided by an international consortium. All sub-systems were finally assembled together and tested in Bern.

I like this drawing because the child represented simply but realistically the satellite although he or she seems to be quite young. I am the Mission Scientist of the CHEOPS consortium. My job is to make sure that the instrument is built in a way that will allow the scientists working on the mission to achieve their goals. One of these goals is to measure the size of Earth-like exoplanets. I also participate in the organisation and animation of the science team, bridging the scientific activities and the ground-based operations. Now that we are approaching the launch, I also spend some time talking about the mission with the media.

Establishing the scientific programme of CHEOPS with a team of about 40 European scientists has been a long process over the past 6 years. It is a bit magical that we now have several years worth of exciting and well-defined observations. But really, I feel lucky to have had the chance of participating into every aspects of a space mission, from the instrument to the observation programme, in a really short timescale compared to other space missions, which often require over 10 years of involvement.

I like the perspective offered by this drawing, with the silhouette of a very down-to-Earth structure, a castle—but that could also be an observatory—on top of a mountain peak in front of a giant moon. I like the figurative drawings of the pine trees and the stars that surround it. It seems to bridge Earthlings’ inspirations with something bigger and mysterious. You are really drawn to raise your eyes to the sky by this picture. It also reminds me a lot of the poster of Steven Spielberg’s E.T., which is a poetic ode to space and diversity. I’m the Instrument Scientist. My job is to make sure that scientist and engineers understand each other and that, in the end, the instrument performs as expected.

There are many aspects of this project that are interesting. But if I have to select one, I would say that the most interesting thing is the possibility of working with so many different people. The human interaction is a very important part of the success of a project.

What captured my attention here is the explicit connection between CHEOPS and the Earth: it’s not only that CHEOPS was built down here but also that we will be communicating with the instrument every day; receiving and analysing the data on the ground.  What happens on the ground is as important as what happens in space. I am the web developer and responsible for the website and small web applications running on it. For example, I programmed the site where you can see all children drawings. https://cheops.unibe.ch//campaign-cheops-childrens-drawings

The most interesting part of my work is to act as a kind of interface between the broad public and the science behind the CHEOPS project. While developing the small web applications I get exciting insights into all areas of the CHEOPS project.

I like the Little Green Men, I remember from the movie 'Buzz Lightyear of Star Command: The Adventure Begins'. I have two jobs within CHEOPS: I coordinate the part of the science program dedicated to studying the atmospheres of exoplanets and I also take care of the mission's exposure time calculators that allow scientists to correctly plan their observations.

The most exciting thing is to fine-tune the planets we will observe, and make sure that we get the very best out of the satellite.

There is an astronaut studying the rings of a giant planet - that's a very cool idea! I’m the system engineer of the software for the Science Operation Center (SOC) in Geneva. For me the most challenging part of my work was the creation of the database for the communication channel between the spacecraft and the ground operators, because I had to learn everything from the ground, and to build the database without prior knowledge. I think the most interesting, exiting part will be when we start receiving the data from the space and the telescope sees the first light.

I particularly like how the drawing makes connections between the past and the present, between the 'ancient' and 'modern' CHEOPS and how it links countries involved in the project together. I am the Project Assistant of CHEOPS, assisting with the administrative and financial aspects of the team at the University of Bern.

The fun of this job is not only to complete the daily routine work, but also to be part of the team full of engineers and scientists to complete tasks under pressure of deadlines.

The children drew the universe in their eyes with imagination and understanding that we, as adults, couldn’t have.