Dreams of another world 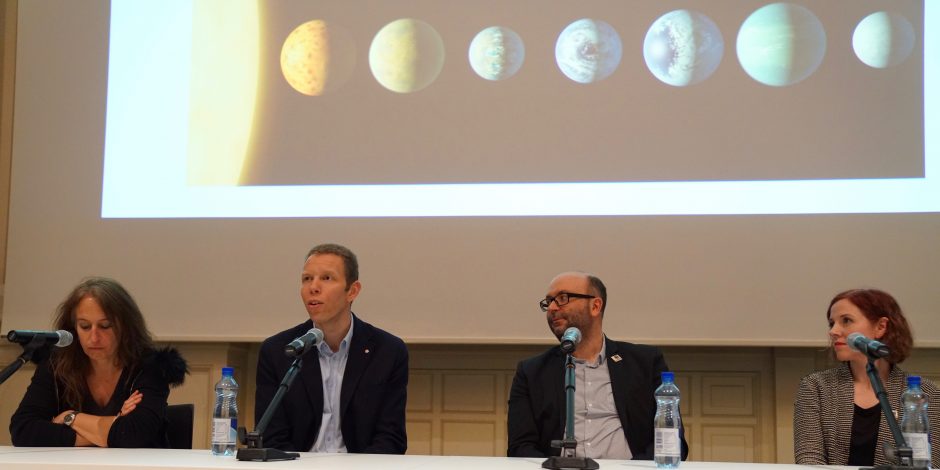 The discovery of seven earth-like planets around an ultracool star made headlines worldwide. How does the so called TRAPPIST-1 system look like? This question was answered by scientists and a science fiction writer during an event at the University of Bern organized by the Center for Space and Habitability (CSH) and the NCCR PlanetS. «Exoplanet sciences are part of the history of Switzerland,» said Kevin Heng, Director of the CSH. In 1995, astronomers of the University of Geneva found the first exoplanet around a sun-like star. «22 years later, this is the second major discovery,» emphasized Heng the importance of the detection of the TRAPPIST-1 system which is so compact that compared to our solar system the seven planets would sit well within the orbit of Mercury. One of the questions to ask is: Do these planets have water? «You will hear that answer within the next five years,» the astrophysicist is convinced.

«We are going from hypothesis and assumptions to real observations,» added Brice-Olivier Demory who was part of the discovery team: «With the Hubble Space Telescope and the forthcoming James Webb Space Telescope we have a chance to really probe the atmosphere of these rocky planets and try to determine whether they are habitable or not.» The professor at the University of Bern’s CSH got a lot of phone calls and emails concerning the TRAPPIST-1 system – not only from astronomers but also from people writing books, or scientists in biology and economics. «I am very happy to see that astronomy with this discovery and the search for life is something that is shared universally,» he said. Discussions about the TRAPPIST-1 system at the University of Bern. (Photo: Sylviane Blum)

According to Yann Alibert, professor at the University of Bern, the TRAPPIST-1 planets should be water rich. This at least is suggested by computer simulations that the astrophysicist was running last year. «For our computer simulations we take as ingredients the law of physics like mass conservation and astronomical observations,» he explained. Another result of the calculations was that the planets around small, red stars are earth-sized. «This is not really surprising, because the mass you have around these stars is not very big,» said Alibert. He hopes that the TRAPPIST-1 system is only the first of a series that will be detected in the near future. This would be a powerful test for the theory of planet formation. Zoë Lehmann of the Department of English at the University of Bern emphasized that the discovery of these exoplanets is not only exciting for science: «From a cultural point of view it is really important as well.»  In science fiction and philosophy of science it is widely discussed what it would mean if Earth is not one unique planet but one of thousands or millions of similar ones. «That makes a big difference to who we are as human beings on this planet,» said Lehmann: «TRAPPIST-1 is a real measurable example of getting one step closer to knowing what the answer to that might be.»

At the event in Bern, a possible answer was given by the Swiss science fiction writer Laurence Suhner. Already last year, she was contacted by one of the scientists studying TRAPPIST-1 to write about the amazing planetary system. Her novel was published in the same edition of the journal «Nature» as the paper of the scientific discovery. «I like to work closely with scientists and try to build a world that could possibly exist,» she said. Since the TRAPPIST-1 planets are tidally locked, always the same side faces the star. The scientist told Laurence Suhner to imagine the grey zone between day and night called terminator. «Of course this is fiction, but it is close to reality,» the author said. Listen to an excerpt of the story:

You find the entire story of «The Terminator» and the talks and discussions of the scientists on 9 March 2017  in the podcast of the University of Bern.