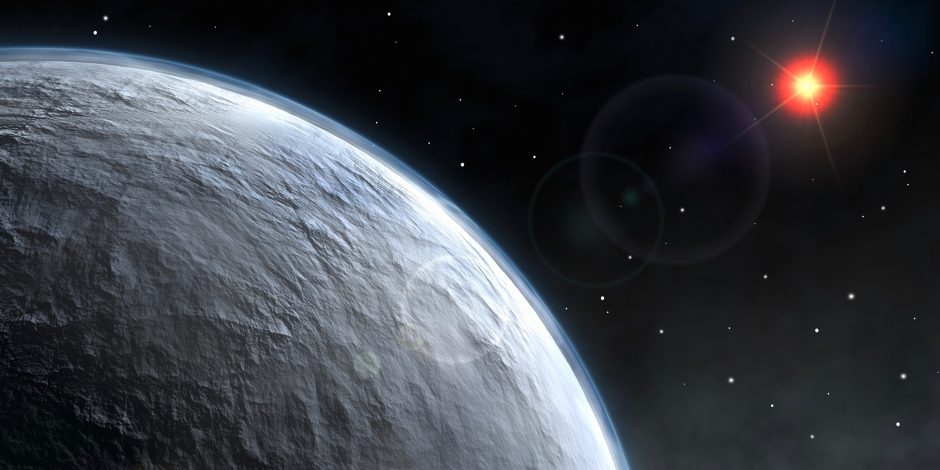 Water is necessary for life as we know it, but too much water is bad for habitability. Therefore, to study the habitability of extrasolar planets, determining the abundance of water is a key element. Yann Alibert, Science Officer of PlanetS, shows that the observation of exoplanets at different ages can be used to set statistical constraints on their water content – an important result for future space missions.

With space telescopes astronomers can measure the radius of exoplanets passing in front of their star in a so called transit. Knowing the mass as well, calculating the density is easy. But this doesn’t mean that you exactly know what the objects are made of. Yann Alibert, leader of the ERC group PLANETOGENESIS at the University of Bern, explains: “Medium density can mean that there is water in the planet, but it could also be a combination of silicates and iron with high density and gas with low density.” “With planets it’s like looking at people, you can try to figure out hidden details”, says astrophysicist Yann Alibert. (Photo: meienberger-photo)

Besides mass and size, the researchers need an additional piece of information to find out whether exoplanets are water-rich or water-poor. But what could that be? It was almost by chance that Yann Alibert came across a solution. Two years ago, when he was asked to give a talk at a conference he tried to figure out what would be the benefits of knowing the age of the stars hosting transiting exoplanets. According to the current theory planets are formed together with their stars and therefore the exoplanets are supposed to have approximately the same age as their host star.

“It’s a bit like looking at a bunch of people”, says Yann Alibert. “You see how tall and how heavy they are, and you try to think about what you would be able to find out if you knew their age – maybe that in general young people have more muscles.” How could the mass, the radius and the age of exoplanets give away some information about their internal structure? To answer this question Yann Alibert computed how planets of different compositions evolved over billions of years. “We showed that although two planets could have the same radius and mass at a given time, in general they do not have the same radius at another time”, the researcher summarizes in his paper that is now published online in the journal Astronomy & Astrophysics.

The astrophysicist calculated that the time evolution of the planetary radius depends on the amount of water ice that the planet is made of. Changing the amount of ice in a planet also changes its mean heat capacity and its gravitational energy. This energy difference means that the rates of cooling and contracting of water-rich and water-poor planets diverge – the reason for the change of the radius. The difference is small, but large enough to be statistically measured by comparing two samples of planets of similar mass but at different age.

“In short, you observe a sample of planets that are 5 billion years old”, Yann Alibert explains: “Then you observe a similar sample of planets that are considerably younger, like 500 million years old, and you compare their radii. This gives you an estimation on how fast the planets contract, and finally this can be related to the amount of water in the planet. So you may prove that some planets are water-rich.” What may sound easy, is rather tricky. “The idea is quite intuitive in fact, but the statistics in the paper is not simple”, the researcher admits. In his model he studied low-mass planets from Super-Earths to Neptun-like objects consisting of four layers: a core, a silicate mantel, an icy mantle and a gas envelope, computing hundreds of thousands of planet internal structure models.

Despite further assumptions and approximations Yann Alibert is convinced that future space missions observing exoplanet transits should be able to measure the calculated effect: „Transit observations such as will be performed by CHEOPS, TESS, or PLATO will be able to set statistical constraints on planetary composition with this model, provided the stellar age is known with sufficient accuracy and enough planets can be observed with sufficient mass and radius accuracy.” This should help to better understand planet formation and potential habitability. (bva)