The Birth of a Planet 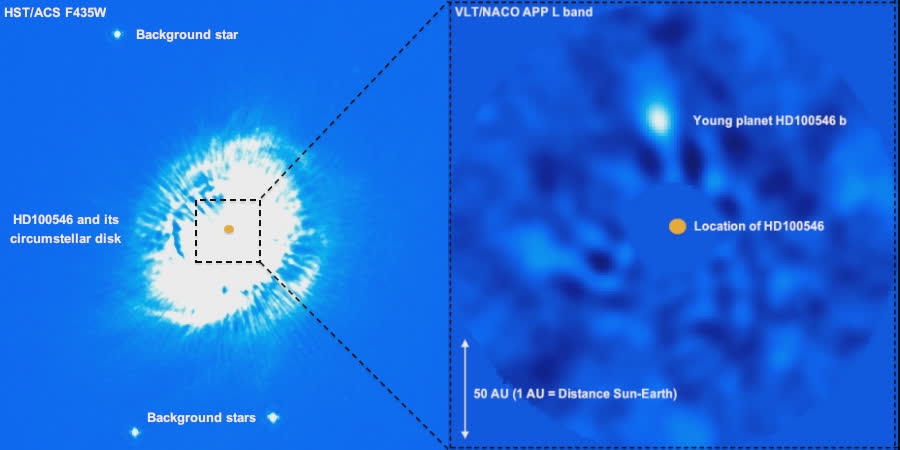 Astronomers of PlanetS have confirmed the existence of a young gas giant planet that is still embedded in the gas and dust rich disk around its young host star. For the first time scientists are now able to directly study the planet formation process at a very early stage. In the gas and dusk disk around HD100546 a planet is born. On the close up view (right) the star has been masked out during the data analysis. (Credit: Sascha Quanz/ETHZ)

For a full night a high-resolution infrared camera at the Very Large Telescope (VLT) in Chile observed only one object although telescope time at the European Southern Observatory (ESO) on Mount Paranal is very precious. Analysing the dataset collected by the instrument called NACO, an international team led by Sascha Quanz of ETH Zurich was able to confirm its earlier hypothesis: a giant planet candidate is orbiting the star named HD 100546. «The object is still in the process of formation and possibly surrounded by a disk from which it continues gathering material,» explains Sascha Quanz. The study that is published in the «Astrophysical Journal» has been carried out within the frame of the Swiss National Centre for Competence in Research (NCCR) PlanetS.

To confirm the existence of the young candidate planet the researchers analysed the data taken at three different infrared wavelengths. The planet – simply called HD 100546 b – is the first object of this kind ever detected. «It provides unique observational data related to the formation process of a gas giant planet,» says Sascha Quanz. So far, astronomers have found two other young stars that are thought to harbour young gas giant planets, but these objects appear to be in a slightly more advanced evolutionary stage as they already have cleared out large gaps in the disks they are embedded in.

«Our object, however, appears to be still heavily embedded in dust and gas,» explains the researcher. How, where and when giant planets form in the disks around young stars was so far mainly addressed via theoretical considerations and computer simulations. «Now we have a ‘laboratory’ from which we can obtain empirical information,» says Sascha Quanz. HD 100546 is a young star. In astronomical terms this means that the object is «only» five to ten million years old. Located 335 light-years from Earth it is a relatively nearby cosmic neighbour. The formation of a giant gas planet (right) near the star HD 100546 (left) is not yet complete, allowing astronomers to observe the process. (Artist’s impression: ESO/L. Calçada)

The star is surrounded by a large gas and dust disk extending out to more than 300 times the distance between the Earth and the Sun. The young planet orbits its host star in the outer region of the disk about 50 times further away from its star than the Earth travels around the Sun. Current theories cannot easily explain the formation of a giant gas planet in this region. Therefore the new discovery poses a challenge to the researchers. One of many questions is: Was the young planet always in its current position or did it migrate outwards? Since the Swiss astronomers Michel Mayor and Didier Queloz have discovered the first exoplanet around a solar-type star twenty years ago, new theories about planetary formation have been developed including possible migration processes to explain why gas giant exoplanets can be detected orbiting their host stars in very close orbits.

Previous observations of HD 100546 suggested that there might be an additional planet orbiting the star in a distance about five times closer to the star than the now confirmed young planet is. Therefore astronomers might even be able to study the formation of multiple gas giant planets in the same system even though the inner planet still needs further confirmation. Many of the almost 2000 exoplanets detected so far are part of multiple planet systems as our own solar system.

In 2013 Sascha Quanz and his team had already suggested the possible existence of the young planet in the disk surrounding HD 100546 in a first research paper. But at that time other explanations were still possible. With the new data the scientists now rule out that the detected signal could have come from a background source and a first estimate of the temperature and size of the object could be derived. «The observed properties are indeed best explained with a young, forming planet embedded in the disk around its host star,» the researcher conclude. Future observations with the array of radio telescopes called ALMA situated in the Chilean Atacama desert should confirm the existence of the suspected disk surrounding the forming planet and constrain its extent and mass. (bva)