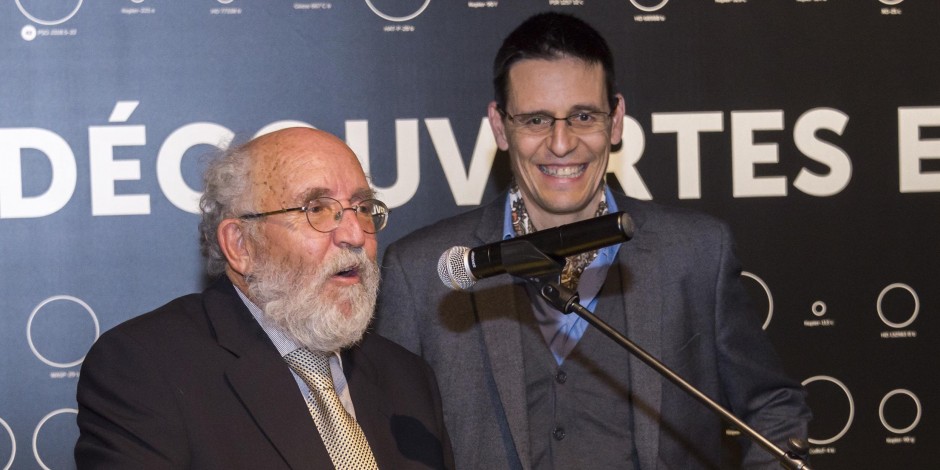 51 Peg b changed our view of the Universe – and the life of its discoverers, Michel Mayor and Didier Queloz. “I thought there was something not working in the software,” remembers Didier Queloz his first reaction when he analyzed the data collected with the spectrometer called ELODIE. Michel Mayor and Didier Queloz at the opening of an exhibition in March 2015 (Photo: Philippe Wagneur Museum Genève)

Has it always been a goal to discover a planet?

Michel Mayor: No, I was working with CORAVEL (ELODIE predecessor, the spectrometer which has “discovered” 51 Peg b) on the properties of double stars. Then one day David Latham, then double stars specialist, asked me to confirm the existence of an object of 11 Jupiter-masses orbiting a star in 84 days. We succeeded with CORAVEL and this is when I thought that with a more advanced instrument we should manage to find planets.

Didier Queloz: When I started my PhD it was clear we were going to develop a much more sensitive instrument than the CORAVEL device. What has allowed us to look for planets is the development of a completely new method: we were able for the first time to simultaneously measure the spectrum of a calibration lamp (Thorium) and that of a star. One could have an accuracy of 10 to 15m/s on the measurement of radial velocities which was exceptional at that time.

What was your feeling at the sight of the first curve?

Michel Mayor: Total disbelief. At that time I was in Hawaii and Didier sent me regular updates on the evolution of the curve. I asked experts around me what they thought, none showed any interest. Such a big planet so close to its star was totaly unimaginable.
Didier Queloz: I could not believe it, I thought there was something not working in the software. I tried to calculate an orbit but knowing nothing, it gave me what I believed being a wacky result. The only one who trusted me, a small PhD student, was Michel Mayor.

When did you start to believe in it?

Michel Mayor: I asked Adam Burrows to use his models to see if such a planet could be stable. He then explained to me that up to 2% of the Earth-Sun distance it was possible, yet the distance from 51pegb to its star was 5%. Then I thought we were perhaps on the right track.
Didier Queloz: We were already sure in the spring of 1995, but it was so big, we decided to wait until the reappearance of the star in July. And then yes, we believed in it and we decided to say nothing to anyone.

Was there a race to the planet?

Michel Mayor: Not at all. We started to have some doubts in late 1994, but as we did not believe in our measurements we took our time to eliminate all the possibilities that could explain them. Then we waited for the summer of 1995 when the star had reappeared to confirm the observations.
Didier Queloz: And then we were scared. Afraid that someone else may find it because it seemed too easy. So everything was hidden until the official announcement.

Has your life changed?

Michel Mayor: Yes, we have been completely monopolized by journalists. At first we thought it was going to calm down quickly enough. Well not at all, with all the new discoveries we have always been much solicited, and this anniversary year it is even more marked.
Didier Queloz: We learned to handle the media, something we did not know before. My life has not changed very much, except that thanks to Michel I learned how to do research.