The cliché of the astronomer spending all his/her time the eye behind his/her telescope, looking to the sky, is outdated. Most of the life of the current astronomer is spent behind the screen of a computer. However there are still times where he/she goes to observe, in some remote place like La Silla observatory in Chile, the first ESO (European Southern Observatory) observatory constructed in Chile more than 50 years ago. Throughout the following logbook, you will be able to discover the life during those missions or “observing runs”, what do we do, what do we use, how it works… and the life in Chile.

You may have already followed this adventures on the PlanetS Facebook page, but here are a couple more pictures and information !

Day #1 of La Silla observing run
Today is the 21th of August, and I, Thibaut, start a trip to Chile where I will observe stars with the Swiss Telescope in La Silla. Luggages ready, I take the plane from Geneva to Santiago de Chile. There are no direct planes so first it takes a flight to Paris and then to Chile. It is a ~14/15h long flight to change continent, fortunately partly by night, if you can sleep during the flight. Once in Chile and after some troubles with my damaged luggage, I passed the border control. Chile is really protective with its environment and you can’t enter the country with various things like cheese or meat. Small exception for cheese : you can if it’s pasteurized.

A taxi waits for me at airport, to take me to the ESO guesthouse. There I will stay for two nights. Day #4 of La Silla observing run
In Santiago I stayed in the ESO guesthouse, a place for astronomers to rest between their different flights. It can also be a great place to meet other astronomers and start discussion ! Usually people stay there only for one night to get rid of the exhaust from the long flight, but I needed to meet other people there so I took one extra night. On the 24th of August, I left Santiago, to take the one hour plane to La Serena and then the three hours bus to La Silla, the place where I will be observing starting the 26th. The bus is not a regular line, it is owned by ESO and used to pick up astronomers in La Serena airport, as well as drive up to and down from La Silla the employees.

Day #5 of La Silla observing run
It’s the 25th and I’ve done my first night in the observatory, quite exhausting. I arrived two nights before my run to get used to the specific way of life here: working the night, and sleeping the day. It also allows Hugh, the previous observer here, to brief me about the latest news regarding Euler, the Swiss telescope of La Silla. Euler measures 1.2 meter diameter and it is equipped with three instruments : PISCO, EulerCam and CORALIE, more details about them come later. Day #8 of La Silla observing run
The last two night were full of clouds. If it makes really beautiful sunsets, we could not observe the stars. The occasion for me to tell you about one role of the observing astronomer. When we are in La Silla, we have to account for the weather : too much humidity, some rain coming, … or even sometimes snow (like it did on the next mountain !), and we can not observe. But there are intermediate cases, where we are taking the decision to observe or not, when there is wind for example, we have to observe in the opposite direction of the wind or if there is too much wind, we have to close the cupola. On our decision can depend the facts to have good or bad data, specially in the case when you have the sky partially covered with thin clouds, hopefully instruments like the flux counter which enables us to compare the light received from a star to what we expect from it, can help us to take those decisions. PS : Today we also saw a fox ! Even if it’s the desert, there is some wild life here, including rapacious like hawks or condors, rodents like mouses or viscachas (a mix of rabbit and squirrel), donkeys, lamas and foxes… and of course insects like spiders or vinchucas. Day #10 of La Silla observing run
It’s about time to speak a bit about what I’m using here. So I already mentioned Euler the 1.2m telescope and the facts it has three instruments. The most used is CORALIE (no picture), a spectrograph, little sister of HARPS or ESPRESSO, it enables us to watch the “color” of a star, and we use it as a kind of radar to know how stars are moving comparing to us. Thanks to that, we might say if a star is hosting an exoplanet companion or not. Then we have EulerCam, the big box under the telescope, it is basically a big camera to do photometry: studying the change of luminosity of stars. In the exoplanet field, we use it to observe transits of some planets in front of their host star. EulerCam can use various color filters to observe different type of stars. The two instruments can’t be used at the same time, that’s why we also have a smaller camera called PISCO (black thing on the side of the telescope) to operate in parallel to CORALIE. If the weather is fine, sometimes the night job consists mainly to monitor that everything is going accordingly to the plan – not much to do. The occasion to play some music with another PlanetS member: Francois, observing for the last night on HARPS. He exchanged the drums he usually plays in the music group of Geneva observatory for the piano, while I brought my trumpet. Yes, that’s also La Silla: some social events! Other social events here include a “tradition” from Swiss astronomers to bring fondue cheese to share with other astronomers. If the weather is not fine, we might have to adapt in permanence the schedule of the night. Before the night we prepare the list of targets we are going to observe. There are multiple programs of observation run at the Swiss telescope, we need to pick targets from those, taking care to match the good conditions of enlightenment from the moon, place in the sky (to avoid too much atmosphere), best time to observe a target (some required a perfect timing, what we call Time Critical Observations), and also, we need to take care that we give each program the attention it needs : in term of climatic conditions and time of observation. If clouds are here for the night, we have to change all the program intended before the night ! Day #14 of La Silla observing run
Yesterday and today I had opportunities to visit some of the other telescopes here in La Silla. First, the 3.6 meters diameter telescope, owned by ESO and where HARPS (constructed by Geneva) is operating. The 3.6m is the biggest one from La Silla, and if bigger telescopes exists in the world, its size is more than appreciable. In the future, it should be updated with the addition of NIRPS and adaptative optics. And then I could visit the 2.2 meters telescope, thanks to Tassilo from Garching. There are a couple of other telescopes in use here in La Silla. We have the REM and TAROT, easy to recognize thanks to the shape of their building, we also have the Danish telescope of 1.54 diameter, the three small “bubbles” of ExTrA (not yet in use), and finally the NTT: New Technology Telescope, that you can recognize thanks to its squared shaped dome, and that I couldn’t see from inside unfortunately. On global pictures you will be able to see much more cupolas that the number of telescopes I mention, you could even see a big antenna : a lot of small telescopes have been decommissioned and are no more in use there, or have been purely removed from the place. 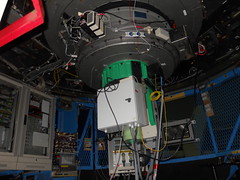 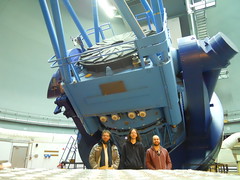 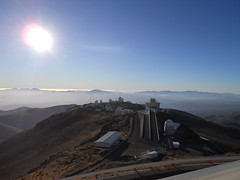 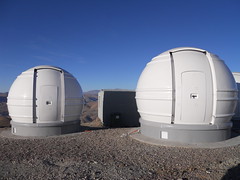 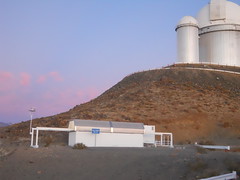 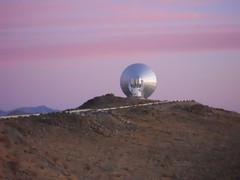 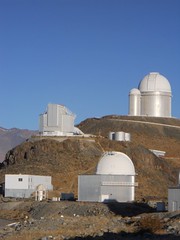 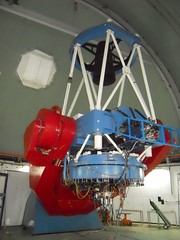 After 14 nights of observation, I went down from LaSilla. I could not stay longer by ESO rules. First you have the altitude, resulting in less pressure (3/4 of sea level pressure) and less oxygen. Also the place is really dry, a night we went down to 2% humidity, which you can always feel when breathing. Those two things, amongst others, allows us better observations (both reduce how blur are the images of the stars due to the atmosphere), but make it more difficult to live here. Those are only two of the multiple reasons why we are not allowed to stay there more time than two weeks. Other reasons includes the facts we work long night (preparation of the night during this time of the year starts around 5-6pm while the night and related activities finish around 8am), and we don’t have week-ends. Astronomers are here for short runs, but some personal is permanent there, for example the cookers who prepare the meals astronomers can find all day and night long. The permanent personal is not doing long run, but either they have week shift from Thursday to Thursday for example, or they go down to La Serena for week-ends. The life in La Silla is special, like out of the world. Good example : the concept of day is relative. We know we are the 21st or 22nd of the month, but we rapidly forget which day of the week we are. No money is necessary once on the mountain, ESO provides food and room, and nothing else requires money to be paid as we live remotely on this mountain. Yes, life there is definitely special.

This logbook ends here, after the last day we usually go down to La Serena to catch a flight and arrive late in Santiago where the guesthouse welcomes us again for a night, before to flight back to Europe. For my part, I did something a bit different as I took the opportunity to visit north of Chile, getting good experience in astronomy there too, with unique opportunity to visit ALMA’s antennas at 5100m of altitude. As a final conclusion, I let you watch the following pictures I took of the sunrise after my last night there.