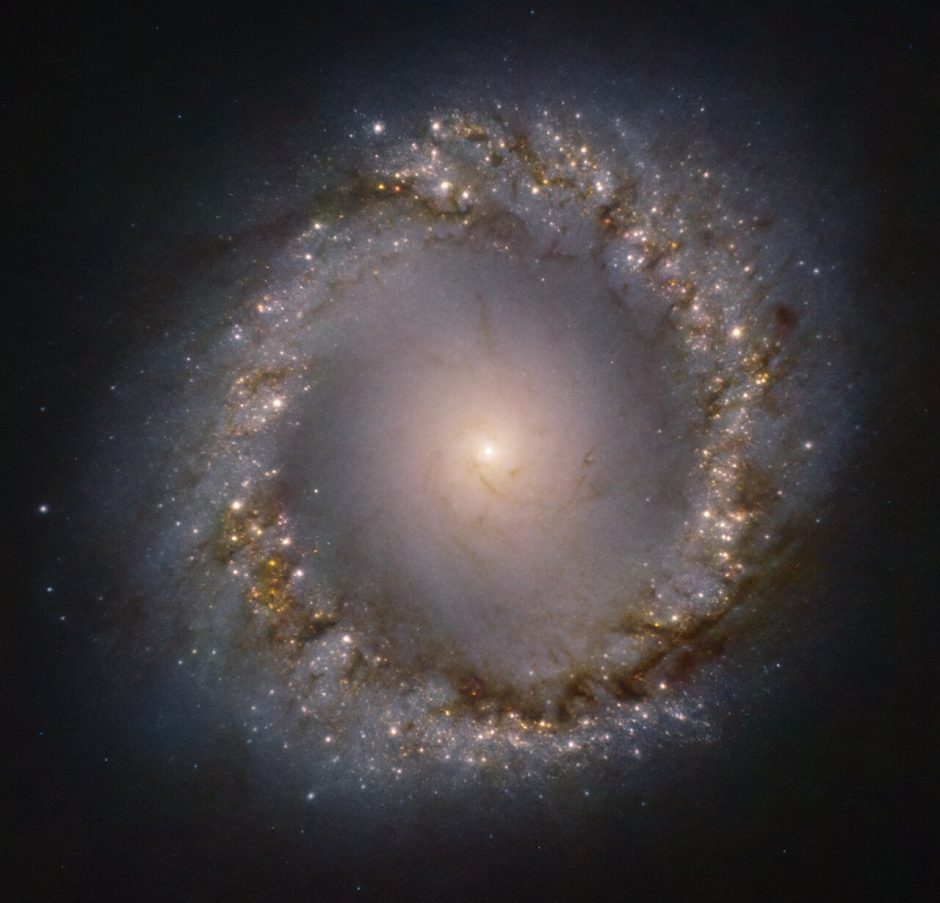 The European Southern Observatory’s (ESO) newest scientific instrument, the Enhanced Resolution Imager and Spectrograph (ERIS) has successfully completed its first test observations. One of them exposed the heart of the galaxy NGC 1097 in mesmerising detail. Installed on ESO’s Very Large Telescope (VLT) at Cerro Paranal in northern Chile, this infrared instrument will be able to see further and in finer detail, leading the way in Solar System, exoplanet and galaxy observations. 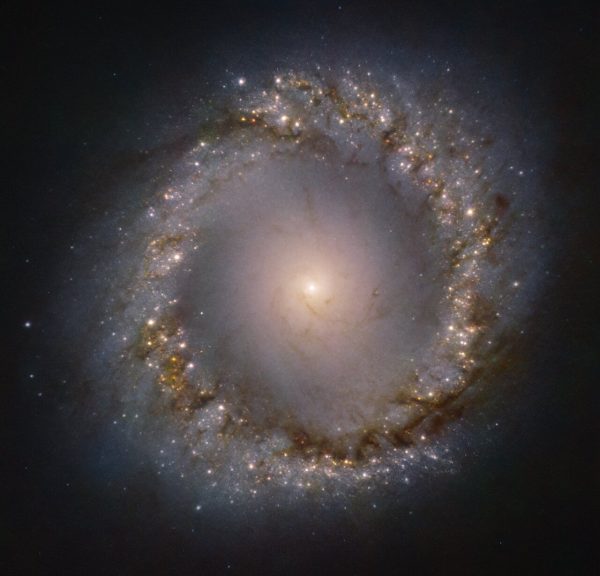 The inner ring of the galaxy NGC 1097, captured by the ERIS instrument.

The versatility of ERIS, designed and built by a consortium of institutes including the ETH Zurich and the NCCR PlanetS, will lend itself to many fields of astronomical research as it aims to take the sharpest images obtained to date using a single 8.2-metre telescope. It will do so using adaptive optics, a technique that corrects for the blurring effects of Earth’s atmosphere in real time. ERIS will be active for at least ten years and is expected to make significant contributions to a myriad of topics in astronomy, ranging from distant galaxies and black holes through to exoplanets and dwarf planets within our own Solar System.

“We expect not only that ERIS will fulfil its main scientific objectives,” says Harald Kuntschner, ESO’s project scientist for ERIS, “but that due to its versatility it will also be used for a wide variety of other science cases, hopefully leading to new and unexpected results.”

The very first test observations with ERIS were obtained in February of this year, with further observations conducted in August and November to test the limits of the instrument. One of these observations features the inner ring of the galaxy NGC 1097, located 45 million light-years away from Earth, in the constellation Fornax. This gaseous and dusty ring lies at the very centre of the galaxy; the bright spots in it are stellar nurseries, shown here in unprecedented detail. The glowing centre shows the active heart of the galaxy, a supermassive black hole that feeds off its surroundings. To put ERIS’s resolution in perspective, this image shows, in detail, a portion of the sky less than 0.03% the size of the full Moon.

Mounted on the VLT’s Unit Telescope 4, ERIS will take over the role of the very successful NACO and SINFONI instruments, providing some essential improvements to the facility for the coming decade. 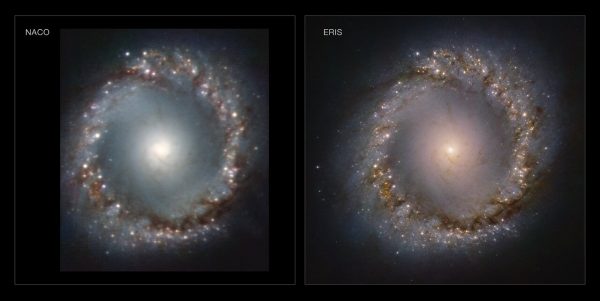 A comparison of the galaxy NGC 1097 imaged by both NACO and ERIS.

ERIS boasts a state-of-the-art infrared imager, the Near Infrared Camera System — or NIX — which was used to image the inner ring in NGC 1097. NIX will offer a new and unique view of many different astronomical objects, such as exoplanets and the discs of gas and dust around young stars. It can use a technique called coronagraphy, which blocks light from stars similarly to a solar eclipse, allowing us to observe the faint planets around them.

ERIS also features a 3D spectrograph named SPIFFIER, an upgrade of SINFONI’s SPIFFI (SPectrometer for Infrared Faint Field Imaging). SPIFFIER collects a spectrum from each individual pixel within its field of view. This will allow astronomers to study, for instance, the dynamics of distant galaxies in incredible detail, or to measure the velocities of stars orbiting the supermassive black hole at the centre of the Milky Way, which is key to testing General Relativity and understanding the physics of black holes.

ERIS’s adaptive optics module is equipped with sensors to analyse atmospheric turbulence on the fly, by monitoring either a real astronomical source or an artificial laser guide star. It sends this information up to a thousand times per second to the VLT’s deformable secondary mirror, which then corrects for the blurring in real time, thus creating more detailed images.

“ERIS breathes new life into the fundamental adaptive optics imaging and spectroscopy capability of the VLT,” says Ric Davies, the Principal Investigator of the ERIS consortium and researcher at the Max Planck Institute for Extraterrestrial Physics (Germany). “Thanks to the efforts of all those involved in the project over the years, many science projects are now able to benefit from the exquisite resolution and sensitivity the instrument can achieve.”