6 days ago Arian Bastani No comments 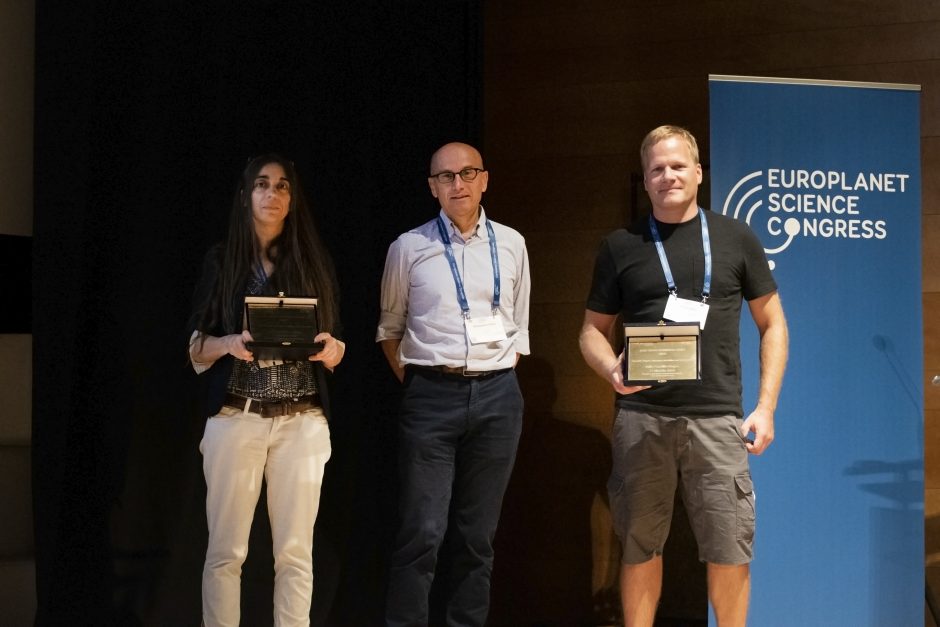 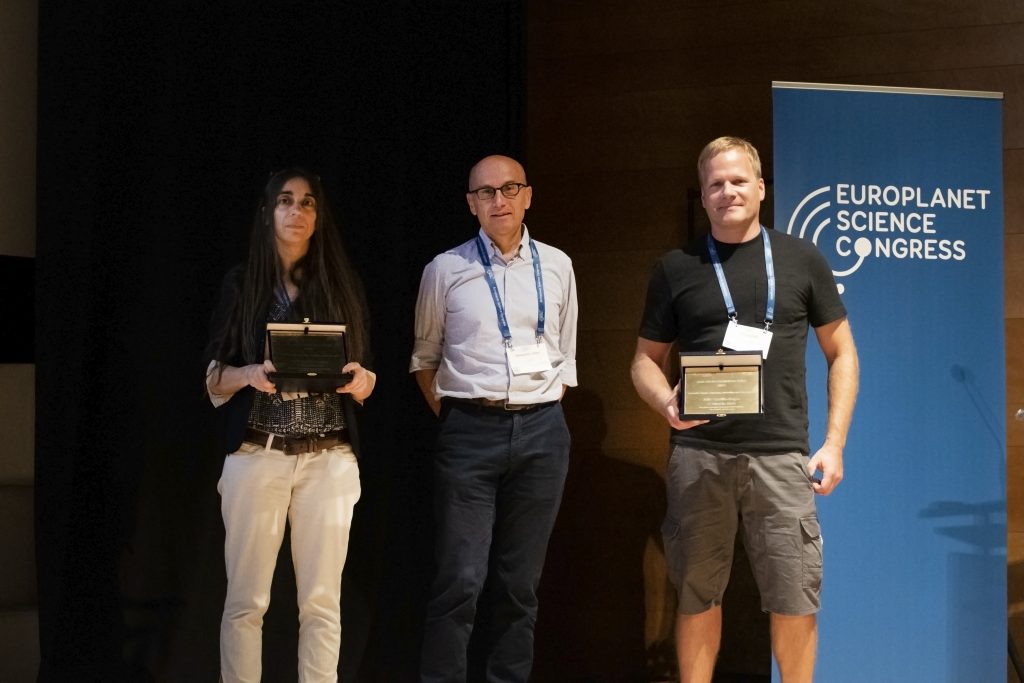 Dr Julie Castillo-Rogez, a planetary scientist working at NASA’s Jet Propulsion Laboratory (JPL) in California (USA), and Dr Martin Jutzi, a physicist working at the Physics Institute of University of Bern (Switzerland) have been awarded jointly the 2022 Paolo Farinella Prize for their outstanding contributions to the field of “Asteroids: Physics, Dynamics, Modelling and Observations” from observational and numerical points of view. The award ceremony will take place today during the Europlanet Science Congress (EPSC) 2022 in Granada (Spain) and will be followed by 15-minute prize lectures by each of the winners.

The annual Prize was established in 2010 to honour the memory of the Italian scientist Paolo Farinella (1953-2000). The Prize acknowledges an outstanding researcher not older than 47 years (the age of Farinella when he passed away) who has achieved important results in one of Farinella’s fields of work. Each year the Prize focuses on a different research area and, in 2022, the twelfth edition was devoted to asteroids, which in recent years have become an increasingly important area of interest for the scientific community.

Dr. Julie Castillo-Rogez has made significant contributions to our understanding of the physical and chemical evolutions of small (and midsized) Solar System bodies. Through modelling and synthesis of existing data, she has gleaned information about the origins and dynamical evolution of objects from the main belt, between Mars and Jupiter, to the trans-Neptunian region, i.e. the region that extends farther from the Sun than the planet Neptune. Her multi-disciplinary expertise, which embraces geology, geophysics and planetology, has allowed her to apply increasingly sophisticated tools to understand the geochemical evolution of objects potentially characterised by volatile elements. Dr Castillo-Rogez’s contribution was critical to the success of the Dawn mission at the dwarf planet Ceres: before the mission, her studies paved the way to understanding that Ceres likely had a subsurface ocean in its past, and might still harbour brines; after the mission, her analysis of Dawn’s data advanced the hypothesis that mid-sized cold bodies could be past or present ocean worlds.

Dr. Martin Jutzi has made outstanding contributions to the study of collisional processes involving bodies ranging from small asteroids to planetary scales. In particular, he developed a state-of-the-art Smoothed Particle Hydrodynamic (SPH) shock physics code specially suited to study the regimes of collisions among small bodies where the complex effects of material strength, friction, porosity as well as gravity determine the outcome concurrently. Dr Jutzi also succeeded in reproducing the asteroid Vesta’s observed shape following its global evolution after two overlapping planet-scale collisions, and even in providing maps of impact excavation and deposition of ejected materials. Recently, he contributed to the numerical modelling of the impact of NASA’s DART mission on the moon of the binary asteroid Didymos, which showed that the small moon Dimorphos may be entirely reshaped by the impact.

Overall, Dr Castillo-Rogez’s and Dr Jutzi’s work have led to a deeper understanding of the nature and evolution of asteroids, both from a theoretical and an observational point of view.

Dr Castillo-Rogez received her MS in Geophysics and her PhD in Planetary Geophysics at University of Rennes (France). She is currently Associate Scientist for the Planetary Science Directorate at Jet Propulsion Laboratory (California, USA).

Before receiving the Prize, Dr Castillo-Rogez commented “I am honored to win this prize, especially as there are so many deserving colleagues out there. The bulk of my work is based on the observations returned by the Cassini-Huygens and Dawn mission, both built on highly successful international collaborations. Working with these teams has been an incredible experience and led to long-lasting friendships on both sides of the Atlantic. So this makes receiving this prize at EPSC 2022 very special. Unfortunately, I have never had the privilege to meet Dr. Farinella, although I have many times referred to his work.”

Dr Jutzi said: “I am very honoured to be awarded the Paolo Farinella Prize. For me this is an important recognition of my contribution to the understanding of asteroid physics, in particular the impact processes that determined the evolution and current state of these objects – some of them being explored by ongoing space missions as we speak. I am grateful to my scientific mentors and colleagues who have helped me achieve this.”

About the Paolo Farinella Prize

The Paolo Farinella Prize (https://www.europlanet-society.org/paolo-farinella-prize/) was established to honour the memory and the outstanding figure of Paolo Farinella (1953-2000), an extraordinary scientist and person, in recognition of significant contributions given in the fields of interest of Farinella, which span from planetary sciences to space geodesy, fundamental physics, science popularisation, and security in space, weapons control and disarmament. The winner of the prize is selected each year on the basis of his/her overall research results in a chosen field, among candidates with international and interdisciplinary collaborations, not older than 47 years, the age of Farinella when he passed away, at the date of 25 March 2000. The prize was first proposed during the “International Workshop on Paolo Farinella the scientist and the man,” held in Pisa in 2010, supported by the University of Pisa, ISTI/CNR and by IAPS-INAF (Rome).

The first “Paolo Farinella Prize” was awarded in 2011 to William Bottke, for his contribution to the field of “physics and dynamics of small solar system bodies”. In 2012 the Prize went to John Chambers, for his contribution to the field of “formation and early evolution of the solar system”. In 2013, to Patrick Michel, for his work in the field of “collisional processes in the solar system.” In 2014, to David Vokrouhlicky for his contributions to “our understanding of the dynamics and physics of solar system, including how pressure from solar radiation affects the orbits of both asteroids and artificial satellites”, in 2015 to Nicolas Biver for his studies of “the molecular and isotopic composition of cometary volatiles by means of submillimetre and millimetre ground and space observations”, and in 2016 to Kleomenis Tsiganis for “his studies of the applications of celestial mechanics to the dynamics of planetary systems, including the development of the Nice model”. In 2017, to Simone Marchi for his contributions to “understanding the complex problems related to the impact history and physical evolution of the inner Solar System, including the Moon”. In 2018, to Francis Nimmo, for his contributions in our “understanding of the internal structure and evolution of icy bodies in the Solar System and the resulting influence on their surface processes”. In 2019, to Scott Sheppard and Chad Trujillo, for their outstanding collaborative work for the “observational characterisation of the Kuiper belt and the Neptune-trojan population”. In 2020, to Jonathan Fortney and Heather Knutson for their significant contribution in our “understanding of the structure, evolution and atmospheric dynamics of giant planets”. Finally, in 2021, to Diana Valencia and Lena Noack, for their significant contributions in “our understanding of the interior structure and dynamics of terrestrial and super-Earth exoplanets”.