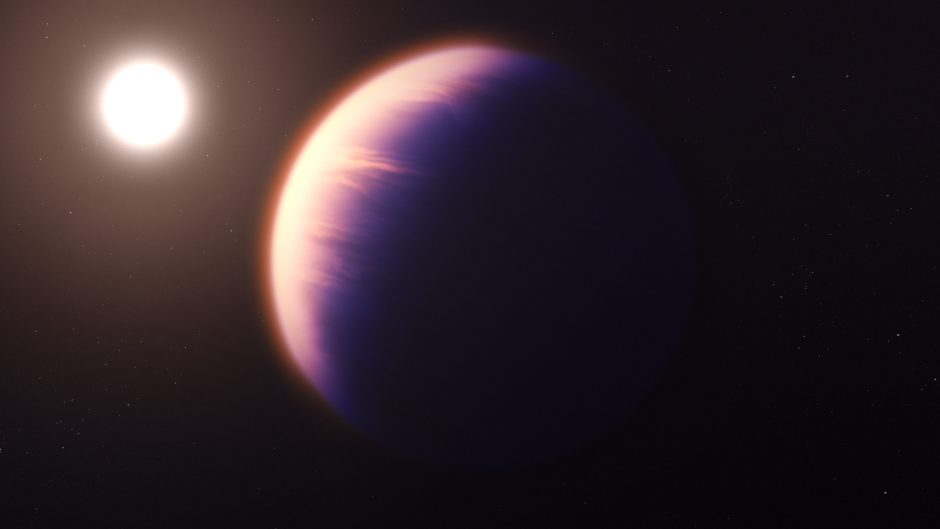 The James Webb Space Telescope delivers a sensation right away with its first scientific result: for the first time, CO2 has been conclusively detected in the atmosphere of a planet outside the solar system. Researchers from the University of Bern, the University of Geneva and the National Centre of Competence in Research (NCCR) PlanetS are involved in the study. 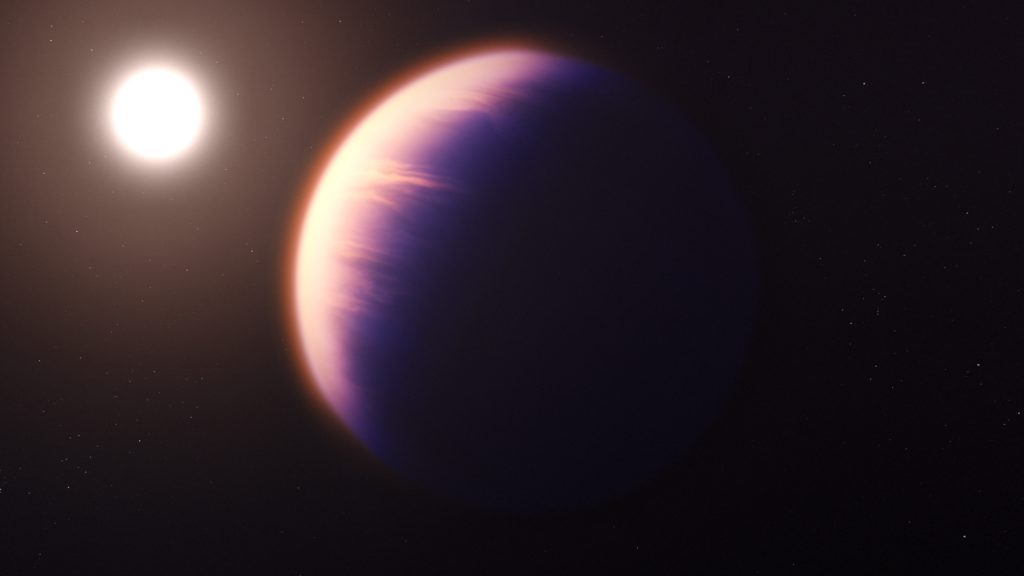 This illustration shows what exoplanet WASP-39 b could look like, based on current understanding of the planet. This illustration is based on indirect transit observations from Webb as well as other space and ground-based telescopes. Webb has not captured a direct image of this planet. © NASA, ESA, CSA, Joseph Olmsted

Due to its role in regulating the climate, carbon dioxide is a central component of the Earth’s atmosphere. Being able to clearly detect the molecule in the atmosphere of distant exoplanets is therefore an essential step in the search for life-friendly worlds. This is exactly what an international team of researchers, with participation from the University of Bern, the University of Geneva and the National Centre of Competence in Research (NCCR) PlanetS, has achieved thanks to observations with the James Webb Space Telescope. The telescope is operated jointly by the European Space Agency ESA, the National Aeronautics and Space Administration NASA, and the Canadian Space Agency CSA, and has started its scientific work in June 2022. The first results have now been published in the scientific journal Nature. 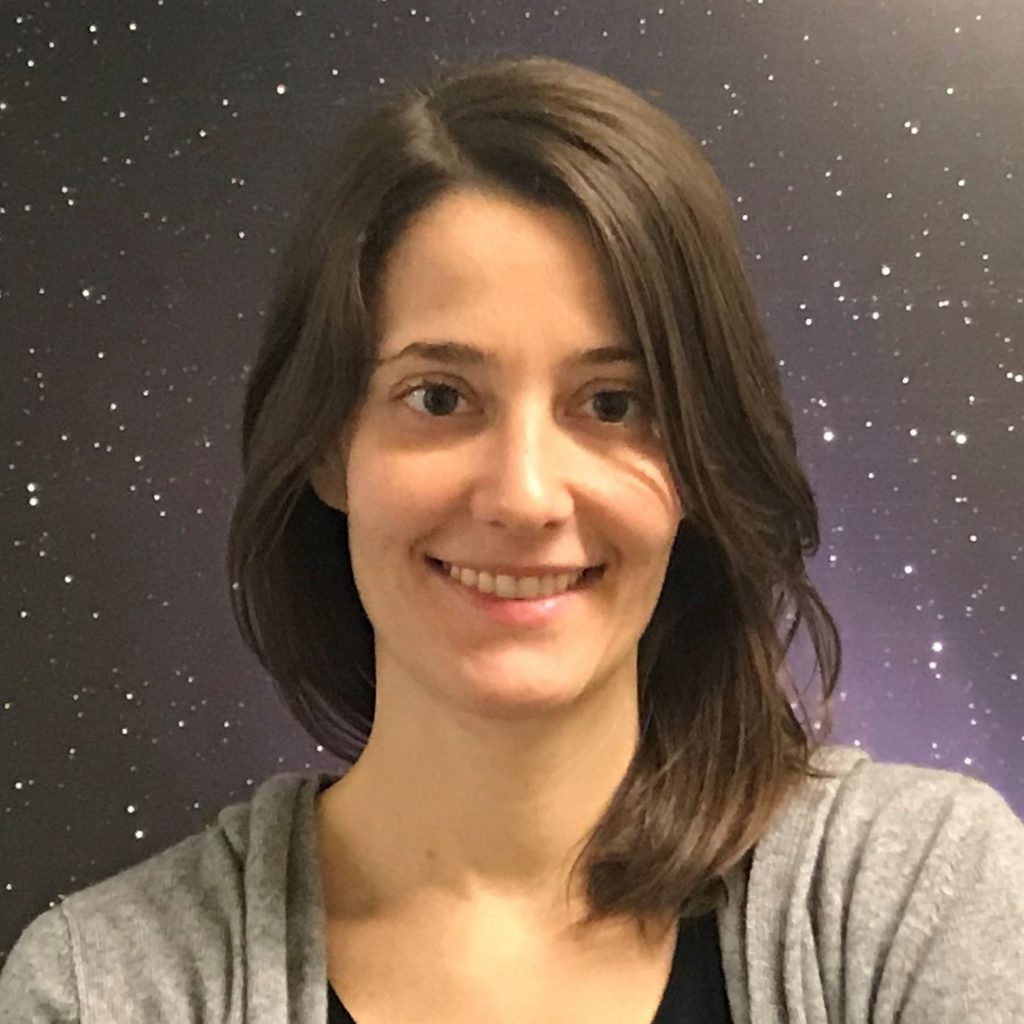 Monika Lendl is a professor of astrophysics at the University of Geneva and member of the NCCR PlanetS. Credit: UNIGE

The planet WASP-39b is a hot gas-giant orbiting a Sun-like star at a distance of 700 light-years from Earth. Unlike the gas giants in our solar system, WASP-39b orbits very close to its star – only about one-eighth the distance between the Sun and Mercury – completing one revolution in just over four Earth-days. Due to the intense insolation it receives, the planet heats up to around 900°C. “The heat causes the planet’s atmosphere to expand, making WASP-39b a third larger than Jupiter, the largest gas giant in our solar system”, study co-author, astronomy professor at the University of Geneva and NCCR PlanetS member Monika Lendl explains. 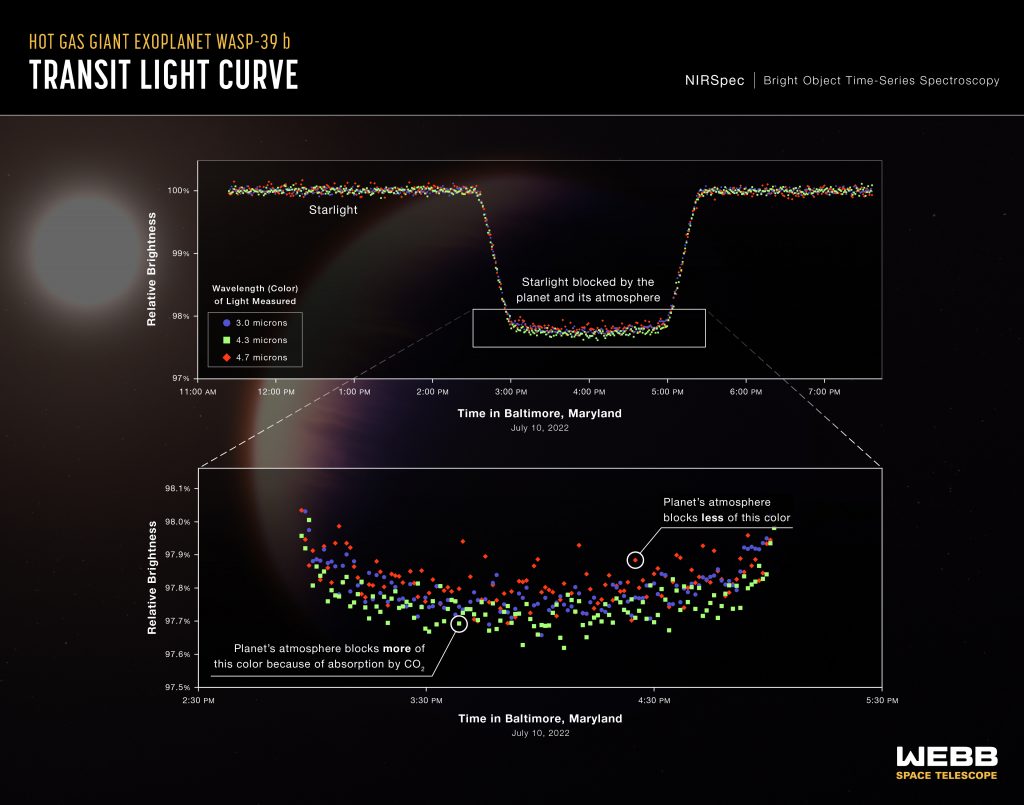 A series of light curves from Webb’s Near-Infrared Spectrograph (NIRSpec) shows the change in brightness of three different wavelengths (colors) of light from the WASP-39 star system over time as the planet transited the star on July 10, 2022. A transit occurs when an orbiting planet moves between the star and the telescope, blocking some of the light from the star. © ILLUSTRATION: NASA, ESA, CSA, Leah Hustak (STScI), Joseph Olmsted (STScI)

When a planet passes directly in front of its host star, some of the star’s light passes through the planetary atmosphere before it reaches the telescope. “The atmosphere filters out some colors of this light more efficiently than others, depending on factors such as its composition, its thickness, and its cloud content”, Lendl says. With the James Webb Telescope, researchers can break down light into its colours to identify characteristic “fingerprints” of different gases and determine the composition of the atmosphere.

First clear detection of carbon dioxide on an exoplanet 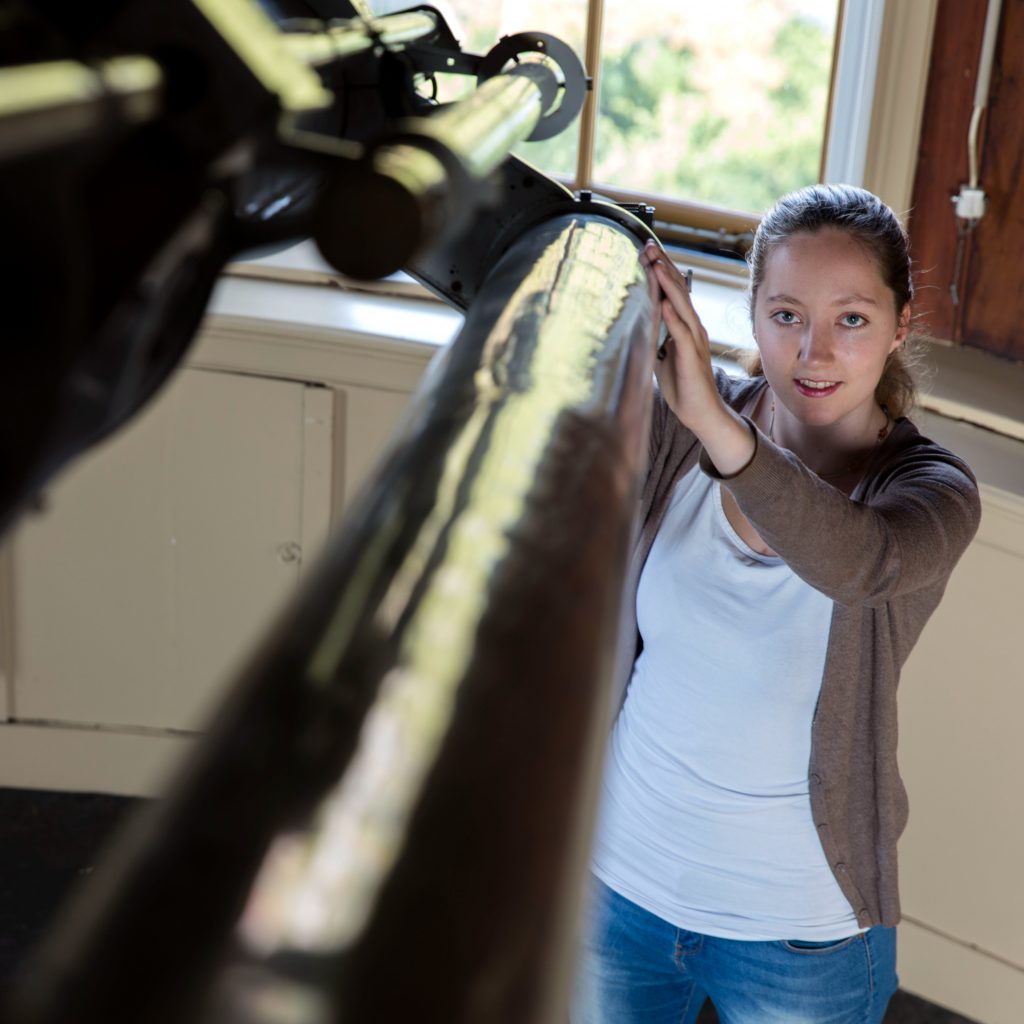 Using the Webb Telescope’s Near-Infrared Spectrograph (NIRSpec) instrument, the team of researchers were able to detect the fingerprint of carbon dioxide in the light that passed through the atmosphere of WASP-39b. “From the first glance at the data, it was already clear that we were dealing with a spectacular discovery,” says Dominique Petit dit de la Roche, researcher at the University of Geneva, co-author of the study and NCCR PlanetS member. “For the first time, carbon dioxide has been clearly detected on a planet outside the solar system”. 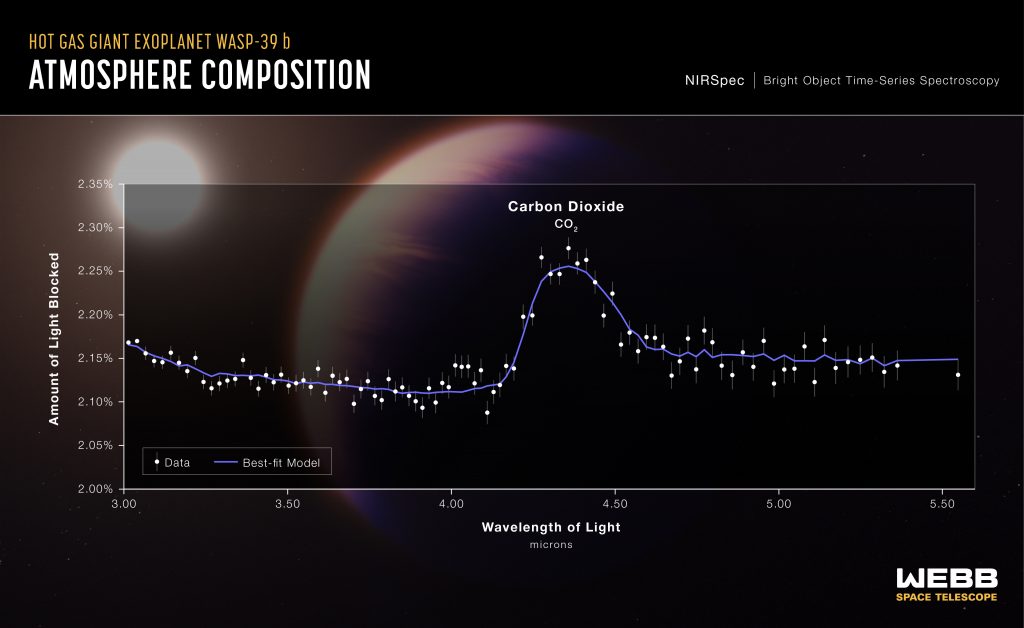 A transmission spectrum of the hot gas giant exoplanet WASP-39 b captured by Webb’s Near-Infrared Spectrograph (NIRSpec) on July 10, 2022, reveals the first clear evidence for carbon dioxide in a planet outside the solar system. This is also the first detailed exoplanet transmission spectrum ever captured that covers wavelengths between 3 and 5.5 microns. © NASA, ESA, CSA, Leah Hustak (STScI), Joseph Olmsted (STScI) 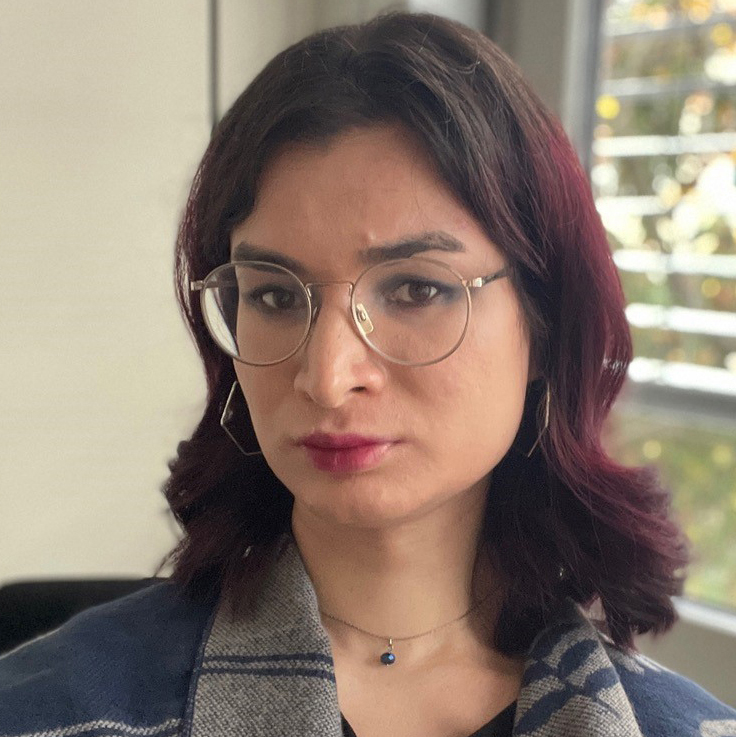 Elspeth Lee, Center for Space and Habitability (CSH) and member of the NCCR PlanetS, University of Bern
© Courtesy of Elspeth Lee

“Detecting such a clear signal of carbon dioxide on WASP-39b bodes well for the detection of atmospheres on smaller, terrestrial-sized planets as well as for measuring abundances of other gases like water and methane,” said Natalie Batalha of the University of California at Santa Cruz, the leader of the international research team that carried out the observations.

Understanding the composition of a planet’s atmosphere also allows insights into the origin of the planet and its evolution. “Carbon dioxide molecules are sensitive tracers of the story of planet formation,” says Elspeth Lee, co-author of the study, Ambizione fellow at the University of Bern and member of the NCCR PlanetS. “The clear detection of carbon dioxide in WASP-39b gives us information about the inventory of carbon and oxygen molecules in the atmosphere. This gives us an idea of the diverse chemical processes that take place in atmospheres under such extreme conditions, as well as the possible rock and gas material that the planet may have picked up during its formation phases,” says Lee.