“Space research at the University of Bern is world class” 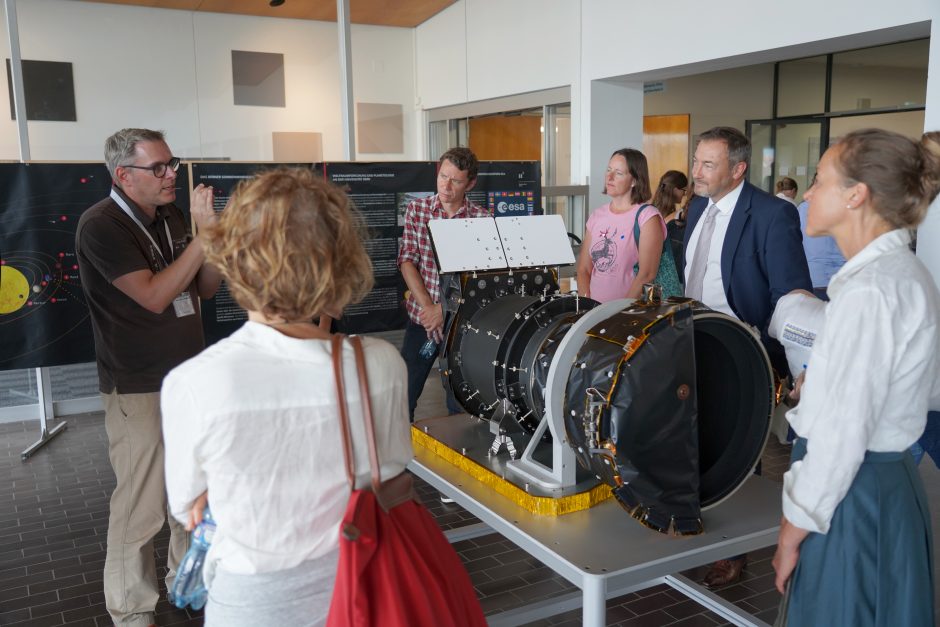 In mid-August, the International Affairs and Multilingualism Division of the Parliamentary Services visited the University of Bern. The delegation viewed various instrument laboratories and gained a comprehensive insight into Bernese space research. 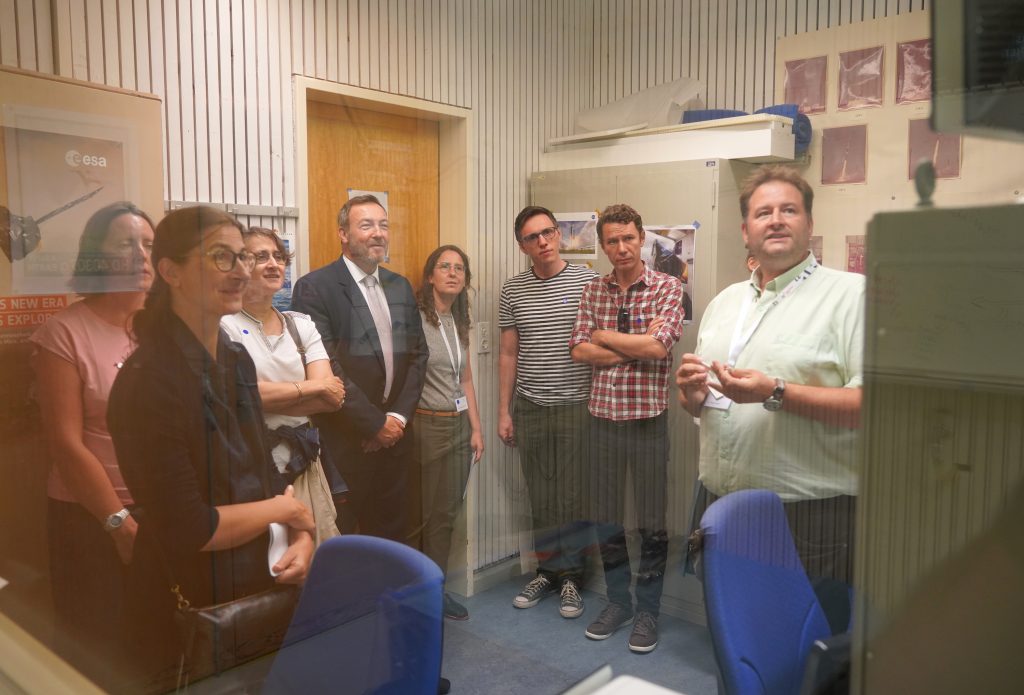 “At the latest since Buzz Aldrin became the second man to step out of the lunar module in 1969 and put the Bernese solar wind sail into the bottom of the moon, Bernese space research has been at the forefront of the world,” said Rector Christian Leumann during his welcoming address on the occasion of the visit by the International Affairs and Multilingualism Division of the Parliamentary Services, headed by Ambassador Claudio Fischer. 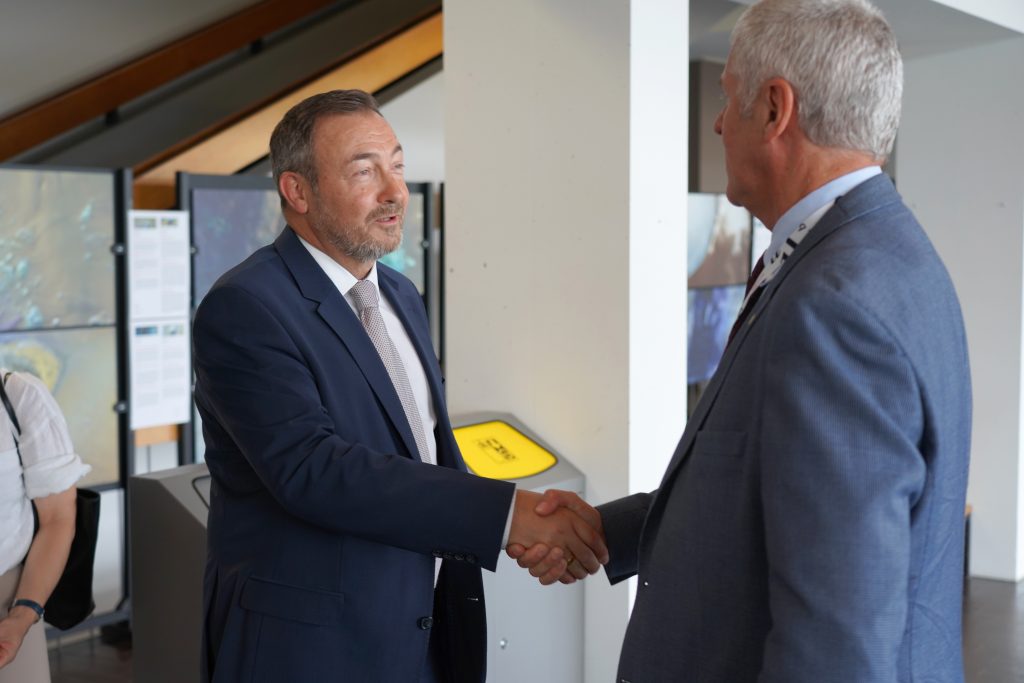 With more than thirty (co-)developed instruments, the University of Bern is involved in numerous missions of major space organisations such as ESA, NASA or JAXA, and in the case of the CHEOPS mission even shares the mission lead with ESA, Christian Leumann continued. “We are also proud that NASA’s research director, Thomas Zurbuchen, is an alumnus of our university,” said Leumann.

Close collaboration with industry
The director of the PlanetS National Centre of Competence in Research, Nicolas Thomas, then emphasised the importance of collaboration with partners from local industry. “We often construct prototypes in our workshops, which we test in our simulation facilities and then hand over to industry for definitive production. For certain instruments, however, we also need infrastructure that we don’t have at the university,” Thomas said.

Overall, space research at the university is unique due to its excellence in various fields, Thomas explained. “In addition to instrument construction, we are also world leaders in the execution of laboratory experiments and in the creation of models and simulations of the formation and development of celestial bodies,” said the astrophysicist. 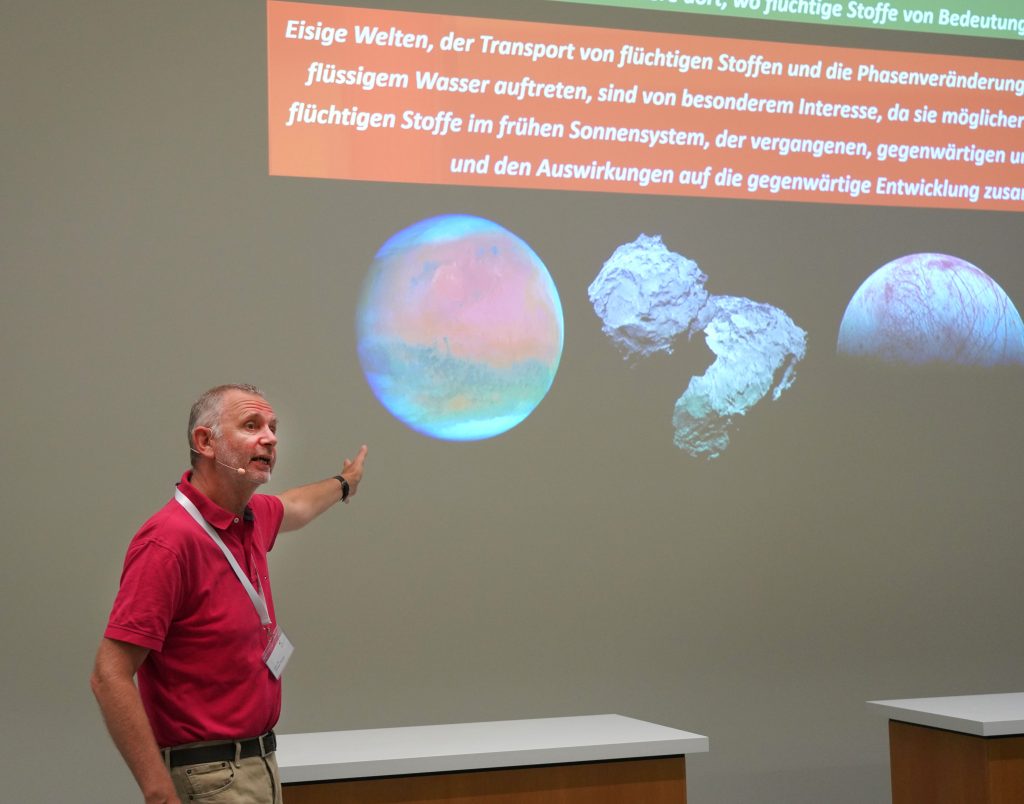 The director of the National Centre of Competence in Research PlanetS, Nicolas Thomas, gives an overview of the directions of space research in Bern. Image: Guido Schwarz

From theory to practice
After the introduction, it was down to the nitty-gritty: the delegation was now able to take a close look at some of the instruments mentioned and visit laboratories in groups.

The first station on the tour held, among other things, images from the CaSSIS camera, which was built under the leadership of the University of Bern and has been providing high-resolution colour images of the surface of Mars on board the ExoMars Trace Gas Orbiter spacecraft since 2016. 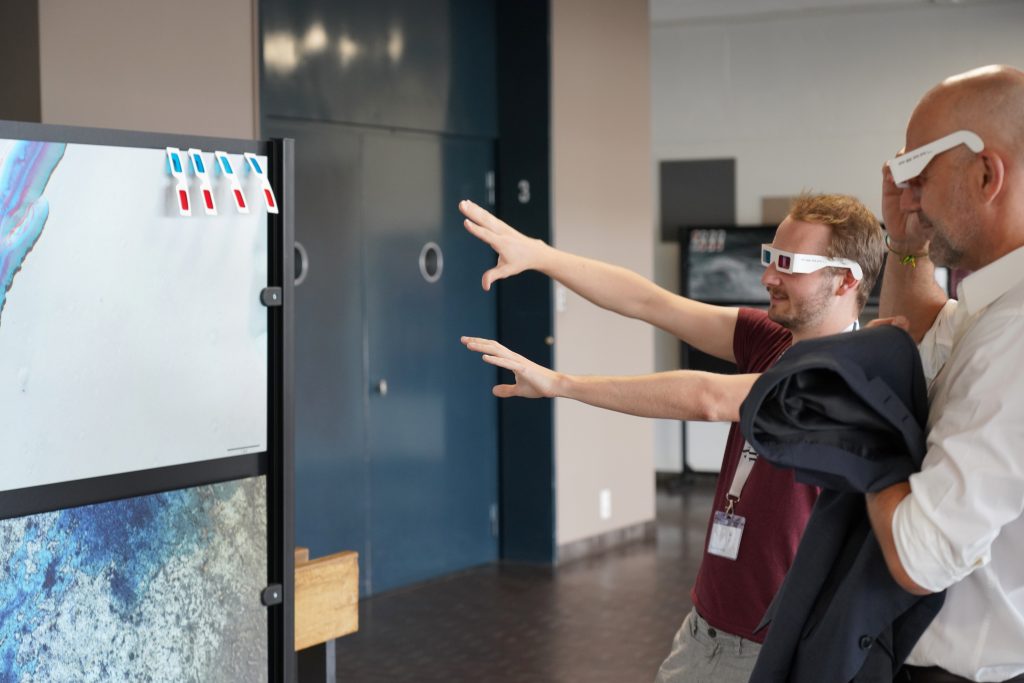 The stereo images from the CaSSIS camera come into their own with 3D glasses. Image: Guido Schwarz

In the Wandelhalle of the ExWi building, visitors were able to examine a model of the CHEOPS telescope. Project manager Christopher Broeg explained how it works and how the space telescope is used to characterise planets outside the solar system. 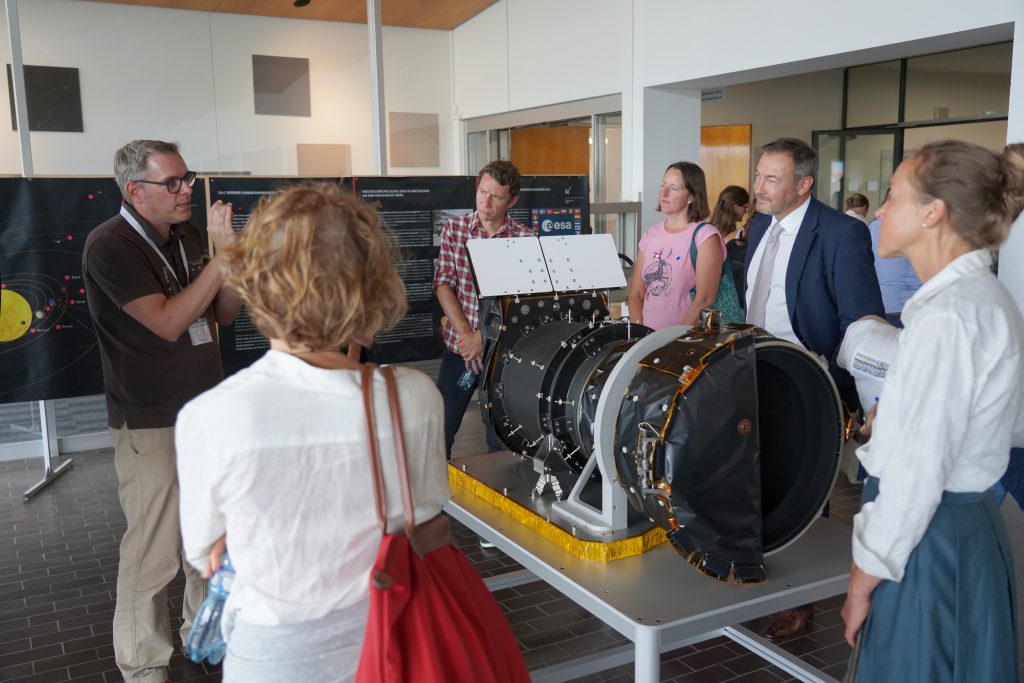 Deep down in the catacombs of the building, the delegation was granted rare access to the large laboratory. Here, environmental conditions of space are simulated in particularly powerful vacuum and cooling chambers. “This is how we can ensure that the instruments we construct here can withstand the conditions in space,” Martin Rubin explained.

Not only are the operating environments simulated in the laboratories of the University of Bern, but also the conditions during the rocket launch. “During this process, the instruments can be exposed to strong vibrations, which can lead to fractures and thus to their destruction,” Timm Riesen explained. That is why instruments are tested for weak points on the so-called “shaker”. 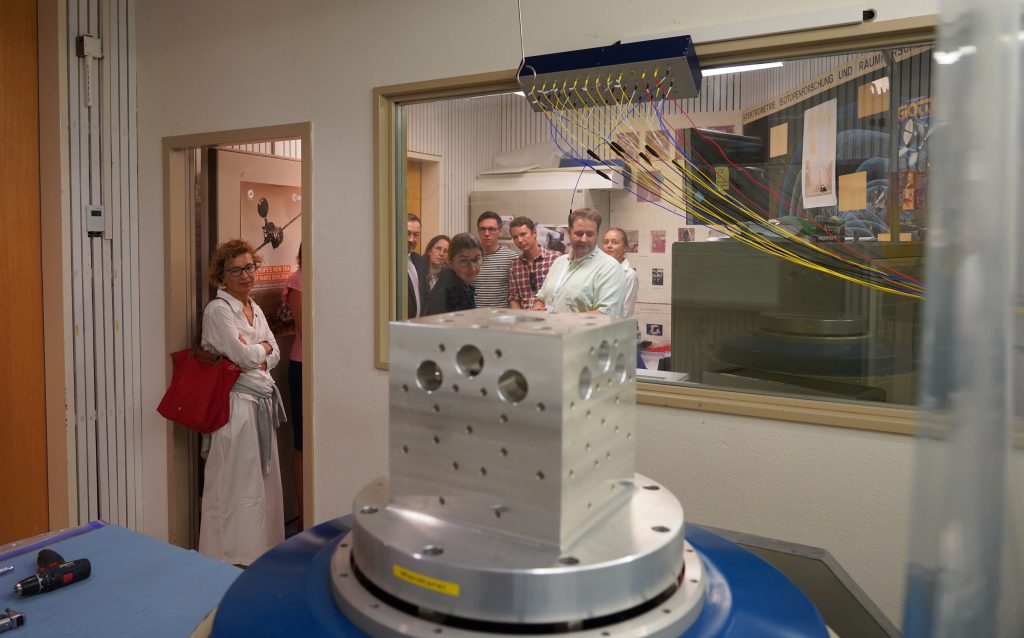 The delegation inspects the “shaker”, which simulates the strong vibrations of a rocket launch. Picture: Guido Schwarz

Back in the Wandelhalle, Ambassador Claudio Fischer expressed his thanks on behalf of the delegation for the “extremely successful and instructive afternoon”. For his part, Nicolas Thomas thanked the delegation for their visit and presented Fischer with a copy of an anthology of CaSSIS images. 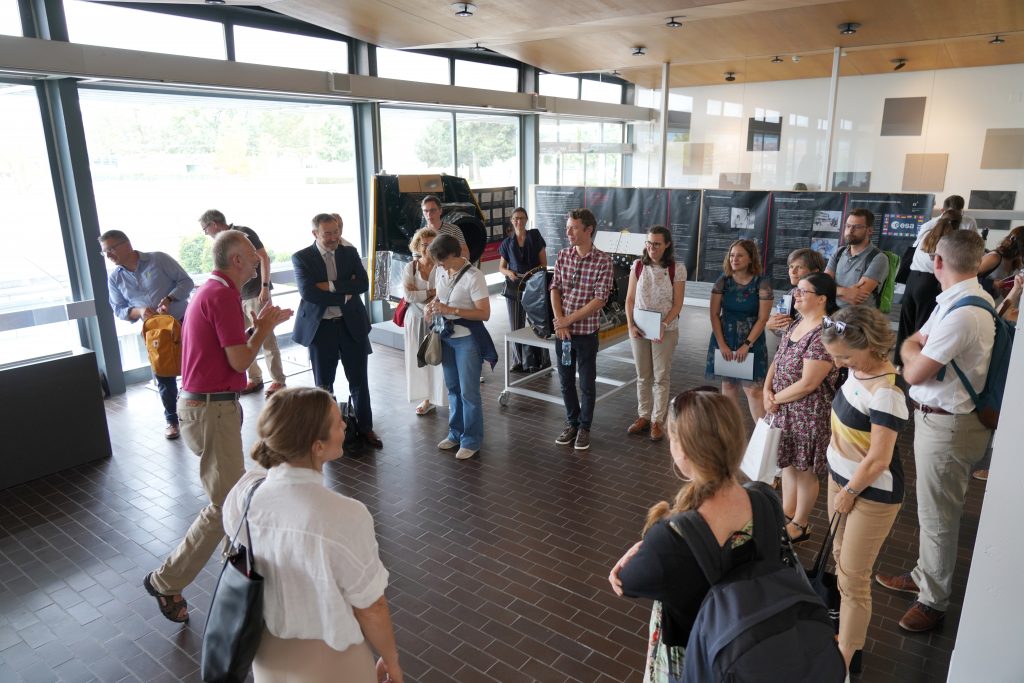 At the end of the visit, Nicolas Thomas and Claudio Fischer thank each other and present gifts. Picture: Guido Schwarz

“As far as space research is concerned, Switzerland punches above its weight,” Nicolas Thomas says. “I hope we were able to show you today, that the University of Bern has a big part in that.”