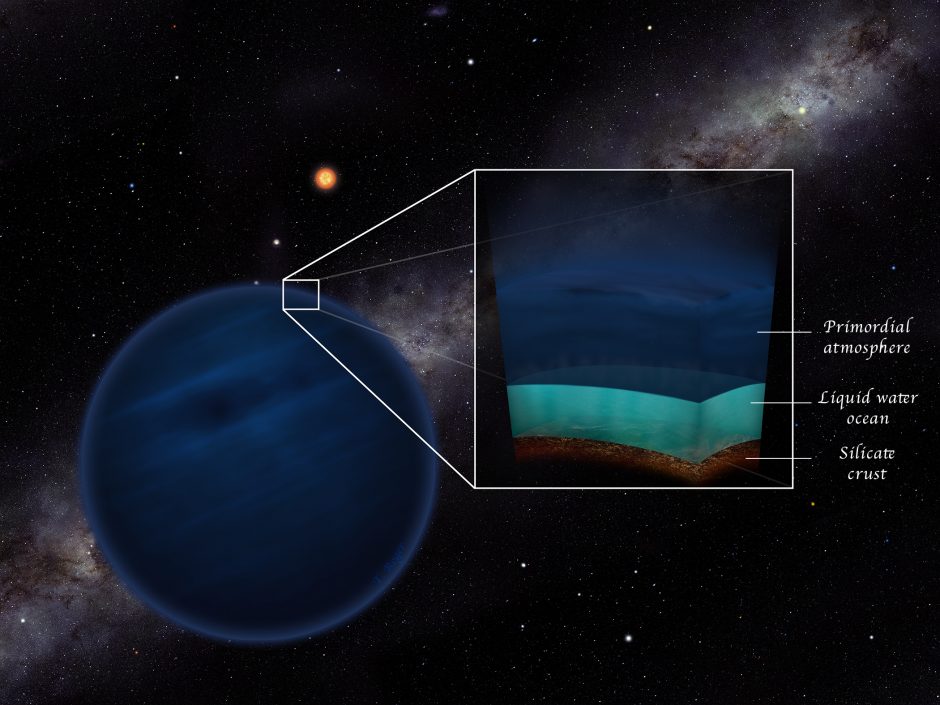 Liquid water is an important prerequisite for life to develop on a planet. As researchers from the University of Bern, the University of Zurich and the National Centre of Competence in Research (NCCR) PlanetS report in a new study, liquid water could also exist for billions of years on planets that are very different from Earth. This calls our currently Earth-centred idea of potentially habitable planets into question. 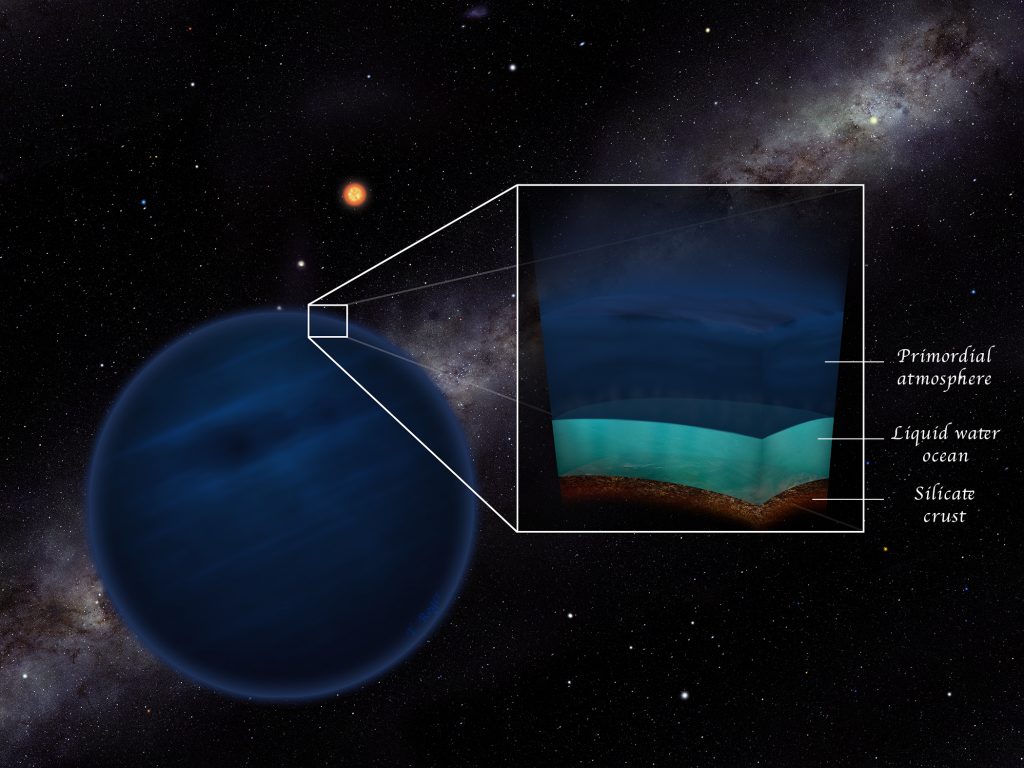 Low-mass planets with a primordial atmosphere of hydrogen and helium might have the temperatures and pressures that allow water in the liquid phase. The presence of liquid water is favorable for life, so that these planets potentially harbour exotic habitats for billions of years. © (CC BY-NC-SA 4.0) – Thibaut Roger – Universität Bern – Universität
Zürich

Life on Earth began in the oceans. In the search for life on other planets, the potential for liquid water is therefore a key ingredient. To find it, scientists have traditionally looked for planets similar to our own. Yet, long-term liquid water does not necessarily have to occur under similar circumstances as on Earth. Researchers of the University of Bern and the University of Zurich, who are members of the National Centre of Competence in Research (NCCR) PlanetS, report in a study published in the journal Nature Astronomy, that favourable conditions might even occur for billions of years on planets that barely resemble our home planet at all.

Primordial greenhouses
“One of the reasons that water can be liquid on Earth is its atmosphere”, study co-author Ravit Helled, Professor of Theoretical Astrophysics at the University of Zurich and a member of the NCCR PlanetS explains. “With its natural greenhouse effect, it traps just the right amount of heat to create the right conditions for oceans, rivers and rain”, says the researcher.

Earth’s atmosphere used to be very different in its ancient history, however. “When the planet first formed out of cosmic gas and dust, it collected an atmosphere consisting mostly of Hydrogen and Helium – a so-called primordial atmosphere”, Helled points out. Over the course of its development, however, Earth lost this primordial atmosphere.

Liquid water for billions of years 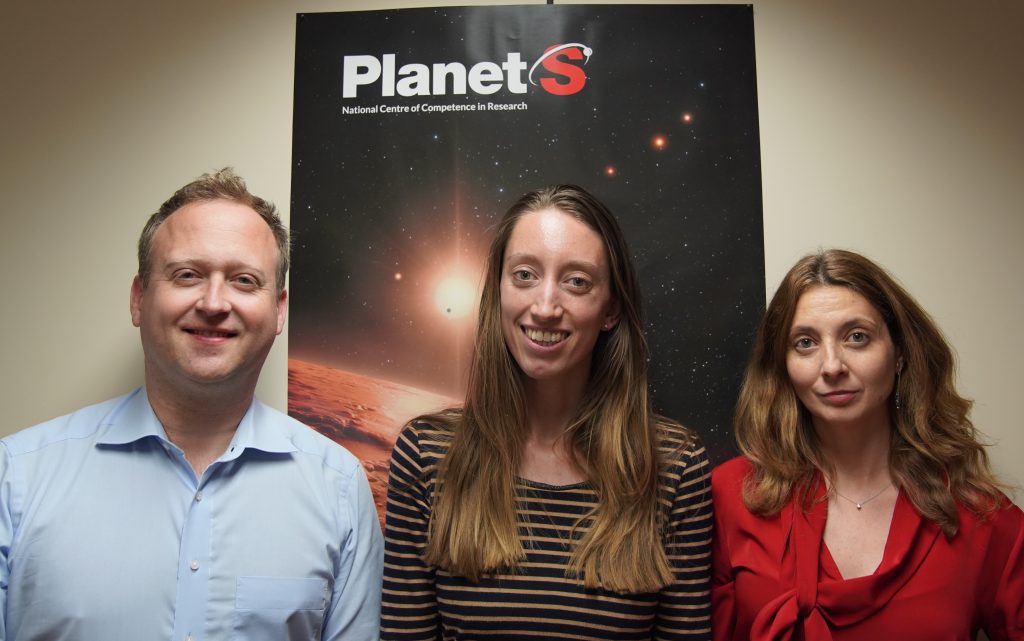 To do so, the team thoroughly modelled countless planets and simulated their development over billions of years. They accounted not only for properties of the planets’ atmospheres but also the intensity of the radiation of their respective stars as well as the planets’ internal heat radiating outwards. While on Earth, this geothermal heat plays only a minor role for the conditions on the surface, it can contribute more significantly on planets with massive primordial atmospheres.

“What we found is that in many cases, primordial atmospheres were lost due to intense radiation from stars, especially on planets that are close to their star. But in the cases where the atmospheres remain, the right conditions for liquid water can occur”, reports Marit Mol Lous, PhD student and lead-author of the study. According to the researcher at the University of Bern and the University of Zurich, “in cases where sufficient geothermal heat reaches the surface, radiation from a star like the Sun is not even necessary so that conditions prevail at the surface that allow the existence of liquid water.”

“Perhaps most importantly, our results show that these conditions can persist for very long periods of time – up to tens of billions of years”, points out the researcher, who is also a member of the NCCR PlanetS.

Broadening the horizon for the search for extraterrestrial life

“To many, this may come as a surprise. Astronomers typically expect liquid water to occur in regions around stars that receive just the right amount of radiation: not too much, so that the water does not evaporate, and not too little, so that it does not all freeze”, study co-author Christoph Mordasini, Professor of Theoretical Astrophysics at the University of Bern and member of the NCCR PlanetS explains.

“Since the availability of liquid water is a likely prerequisite for life, and life probably took many millions of years to emerge on Earth, this could greatly expand the horizon for the search for alien lifeforms. Based on our results, it could even emerge on so-called free-floating planets, that do not orbit around a star”, Mordasini says.

Yet the researcher remains cautious: “While our results are exciting, they should be considered with a grain of salt. For such planets to have liquid water for a long time, they have to have the right amount of atmosphere. We do not know how common that is.”

“And even under the right conditions, it is unclear how likely it is for life to emerge in such an exotic potential habitat. That is a question for astrobiologists. Still, with our work we showed that our Earth-centred idea of a life-friendly planet might be too narrow”, Mordasini concludes.