Home  ›  News  ›  The upside-down orbits of a multi-planetary system

The upside-down orbits of a multi-planetary system 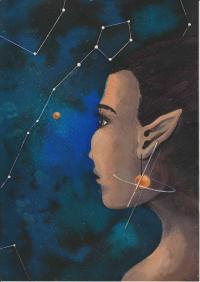 Astronomers led by the UNIGE and members of NCCR PlanetS have discovered exoplanets that orbit in planes at 90 degrees from each other.

When planets form, they usually continue their orbital evolution in the equatorial plane of their star. However, an international team, led by astronomers from the University of Geneva (UNIGE), Switzerland, has discovered that the exoplanets of a star in the constellation Pisces orbit in planes perpendicular to each other, with the innermost planet the only one still orbiting in the equatorial plane. Why so? This radically different configuration from our solar system could be due to the influence of a distant companion of the star that is still unknown. This study, to be read in the journal Astronomy & Astrophysics, was made possible by the extreme precision achieved by ESPRESSO and CHEOPS, two instruments whose development was led by Switzerland.

Theories of the origin of planetary systems predict that planets form in the equatorial plane of their star and continue to evolve there, unless disturbed by special events. This is not the case in the solar system, where our planets lie close to the solar equatorial plane. In this case, the planets are said to be aligned with their star. However, a study showed in 2019 that two of the three planets around the star HD3167 are not aligned with it. HD3167c and HD3167d, two mini-Neptunes that orbit in 8.5 and 29.8 days, actually pass over the star’s poles, nearly 90 degrees from its equatorial plane.

The perpendicular orbits of the HD3167 planets: jewels of the Pisces constellation. © Gilliane Devidal

By re-observing this system with more efficient instruments, a team led by astronomers from UNIGE was able to measure the orientation of the third planet’s orbital plane, the super earth HD3167b, which orbits in less than a day (23 hours exactly). When a planet transits its star, the orientation of its orbit can be determined with a spectrograph, which allows measuring the motion of the stellar regions occulted by the planet and thus deducing its trajectory. The smaller the planet, the more difficult this motion is to detect. It is therefore with ESPRESSO on one of the four 8.2m telescopes of the VLT in Chile that the researchers were able to determine the orbit of HD3167b, which happens to be aligned with the star and perpendicular to the orbital plane of its two siblings. “We needed a maximum of light and a very precise spectrograph to be able to measure the signal of such a small planet”, comments Vincent Bourrier, researcher at the Department of Astronomy of the Faculty of Science of the UNIGE. “Two conditions that are met by the precision of ESPRESSO, combined with the collecting power of the VLT.”

This result could not have been obtained without a precise knowledge of when HD3167b transits its star, which was not possible with the time predicted by the literature with a precision of 20 minutes – an eternity for a transit that lasts 97 minutes. The researchers therefore turned to the CHEOPS satellite consortium, whose main mission is precisely to measure transits with very high precision. “CHEOPS allowed us to know the time of transit with a precision better than one minute. This is a good illustration of the synergy there can be between different instruments, here CHEOPS and ESPRESSO, and the teams that operate them”, says Christophe Lovis, a researcher in the Department of Astronomy of the UNIGE and member of the two consortia.

An unknown celestial body responsible for this disorder

These new measurements seem to confirm the prediction made in 2019 on the presence of a fourth body orbiting HD3167. In this scenario, HD3167b’s proximity to the star kept it under its influence, forcing the small planet to orbit in the plane in which it formed. On the contrary, the two more distant mini-Neptunes were able to free themselves from the star only to fall under the influence of this fourth body, which would have gradually misaligned their orbits. The path is therefore clear for the researchers, who are now setting out in search of this elusive companion.