How the habitability of exoplanets is influenced by their rocks 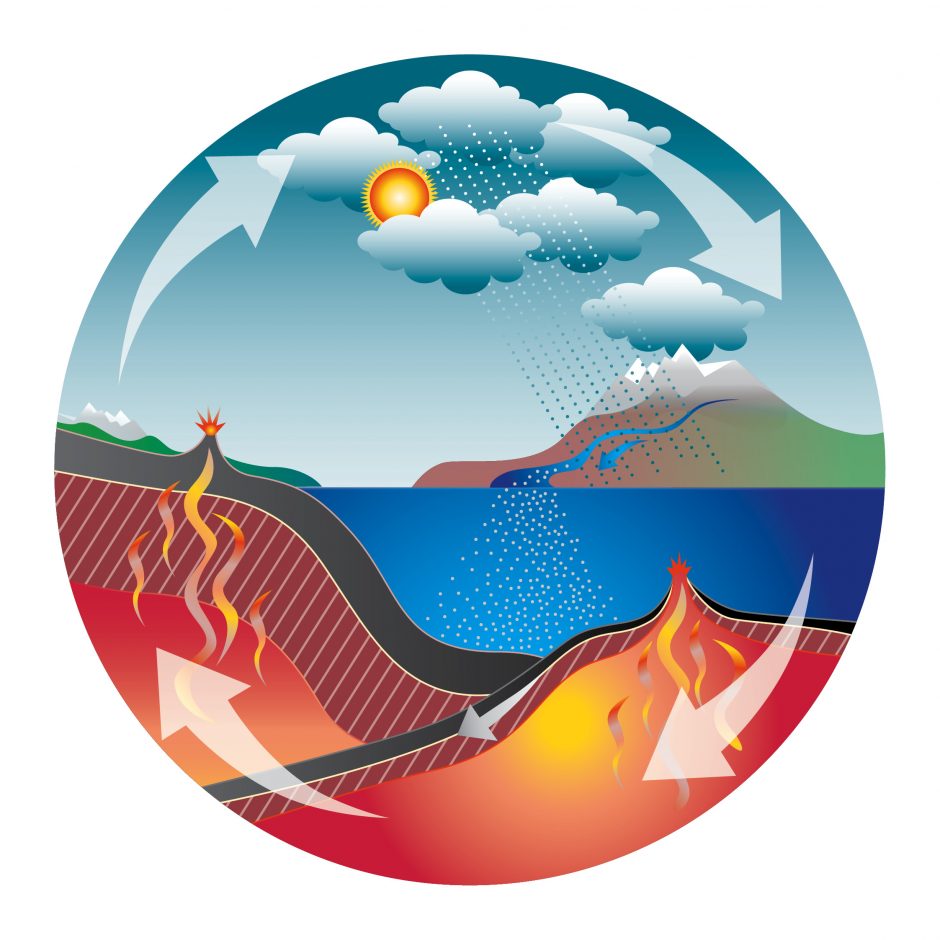 The weathering of silicate rocks plays an important role to keep the climate on Earth clement. Scientists led by the University of Bern and the Swiss national center of competence in research (NCCR) PlanetS, investigated the general principles of this process. Their results could influence how we interpret the signals from distant worlds – including such that may hint towards life. Weathering of silicate rocks is part of the so-called carbon cycle that balances the temperate climate of Earth over long periods of time. Illustration by Jenny Leibundgut

The conditions on Earth are ideal for life. Most places on our planet are neither too hot nor too cold and offer liquid water. These and other requirements for life, however, delicately depend on the right composition of the atmosphere. Too little or too much of certain gases – like carbon dioxide – and Earth could become a ball of ice or turn into a pressure cooker. When scientists look for potentially habitable planets, a key component is therefore their atmosphere.

Sometimes, that atmosphere is primitive and largely consists of the gases that were around when the planet formed – as is the case for Jupiter and Saturn. On terrestrial planets like Mars, Venus or Earth, however, such primitive atmospheres are lost. Instead, their remaining atmospheres are strongly influenced by surface geochemistry. Processes like the weathering of rocks alter the composition the atmosphere and thereby influence the habitability of the planet.

How exactly this works, especially under conditions very different from those on Earth, is what a team of scientists, led by Kaustubh Hakim of the Centre for Space and Habitability (CSH) at the University of Bern and the NCCR PlanetS, investigated. Their results were published today in The Planetary Science Journal. Kaustubh Hakim is a post-doctoral researcher at the Centre for Space and Habitability at the University of Bern and the NCCR PlanetS. Credit: Vandana S. Kushwaha

“We want to understand how the chemical reactions between the atmosphere and the surface of planets change the composition of the atmosphere. On Earth, this process – the weathering of silicate rocks assisted by water – helps to maintain a temperate climate over long periods of time”, Hakim explains. “When the concentration of CO2 increases, temperatures also rise because of its greenhouse effect. Higher temperatures lead to more intense rainfall. Silicate weathering rates increase, which in turn reduce the CO2 concentration and subsequently lower the temperature”, says the researcher.

However, it need not necessarily work the same way on other planets. Using computer simulations, the team tested how different conditions affect the weathering process. For example, they found that even in very arid climates, weathering can be more intense than on Earth if the chemical reactions occur sufficiently quickly. Rock types, too, influence the process and can lead to very different weathering rates according to Hakim. The team also found that at temperatures of around 70°C, contrary to popular theory, silicate weathering rates can decrease with rising temperatures. “This shows that for planets with very different conditions than on Earth, weathering could play very different roles”, Hakim says.

Implications for habitability and life detection Kevin Heng is a professor of astronomy and planetary sciences at the University of Bern and member of the NCCR PlanetS. Credit: Alessandro Della Bella

If astronomers ever find a habitable world, it will likely be in what they call the habitable zone. This zone is the area around a star, where the dose of radiation would allow water to be liquid. In the solar system, this zone roughly lies between Mars and Venus.

“Geochemistry has a profound impact on the habitability of planets in the habitable zone”, study co-author and professor of astronomy and planetary sciences at the University of Bern and member of the NCCR PlanetS, Kevin Heng, points out. As the team’s results indicate, increasing temperatures could reduce weathering and its balancing effect on other planets. What would potentially be a habitable world could turn out to be a hellish greenhouse instead.

As Heng further explains, understanding geochemical processes under different conditions is not only important to estimate the potential for life, but also for its detection. “Unless we have some idea of the results of geochemical processes under varying conditions, we will not be able to tell whether bio-signatures – possible hints of life like the Phosphine that was found on Venus last year – indeed come from biological activity”, the researcher concludes.