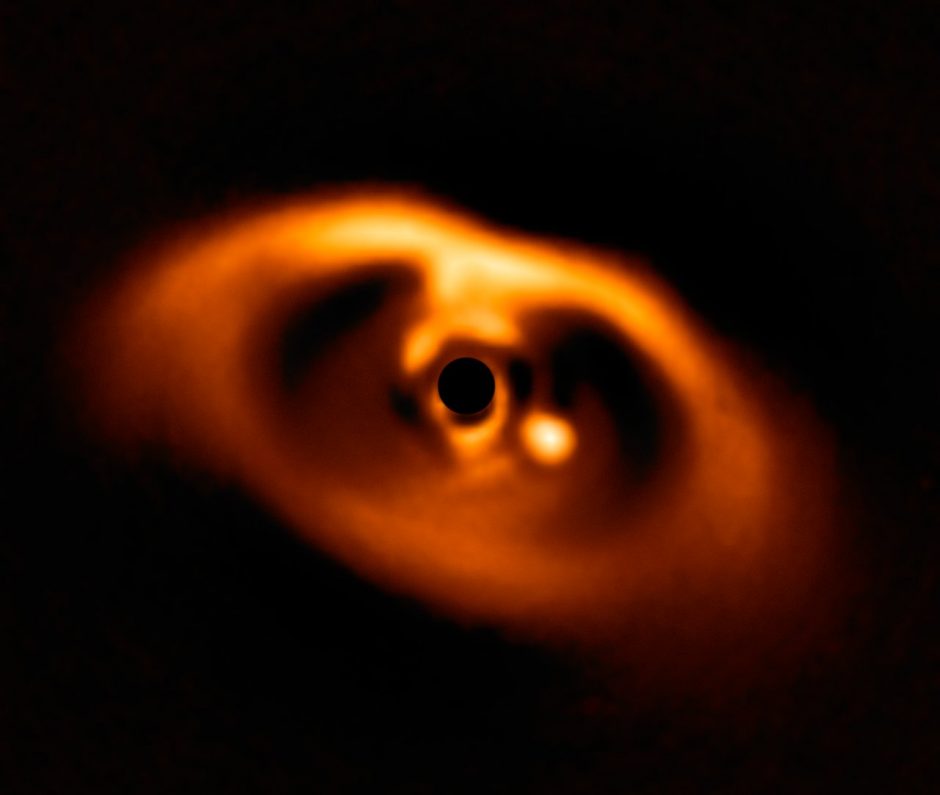 The SPHERE (Spectro-Polarimetric High-contrast Exo-planet REsearch) planet imager(1), currently installed and operating at the ESO Very Large Telescope in Chile, aims at imaging and characterizing giant exoplanets and planet-forming disks around stars close to the Sun. This project represents an incredible scientific, technological and human endeavour and accomplishment that started about twenty year ago. Relying on tight specifications and sophisticated developments brought to maturity, including extreme adaptive optics, coronagraphy, polarimetry, differential imaging and integral field spectroscopy, SPHERE has been designed and built by a consortium of twelve major European institutes(2) over more than a decade to achieve unprecedented performances on sky and meet its scientific objectives. The Figure 1 shows key phases of this design and construction phase.

Top-left: SPHERE at the Nasmyth platform of the Very Large Telescope. Top-right: SPHERE sub-systems: SAXO, the extreme adaptive optics system, ZIMPOL, the Zurich Imaging Polarimeter, IFS, the integral field spectrograph, and IRDIS, the near-infrared imager and spectrograph. Bottom: Pictures from the first Light of SPHERE in Spring 2014 and additional implementation: truck and SPHERE heading to UT3, first Light in the control room, installation of the third toric mirror, and fixing the SPHERE enclosure.

Following its first light in May 2014, SPHERE has been offered to the European community, and rapidly obtained breakthrough results in the domain of planetary formation, exoplanet demographics and physical properties, and on the characterization of minor bodies of the solar system, the environment of evolved stars, and even the central engine of active galactic nuclei(3). The SPHERE consortium played a major role in this success, and is celebrating today its 100th scientific publication(4), together with the release of a series of three articles in the Astronomy & Astrophysics Journal presenting the first phase of the exoplanet demographics survey beyond 10 au that is Saturn’s orbit(5). This achievement represents an important milestone for the SPHERE consortium to reward all individual members and institutes who successfully contributed to each critical step of the project, from the design phase, and the construction, up to the scientific exploitation over the last five years. It allowed training a new generation of young engineers and scientists that allows Europe to be at the edge of this exciting field. It also stands for maintaining SPHERE and its rich and versatile community at the front of high-contrast imaging developments to keep its leadership, and prepare the bright future of ground-based observations on the class of 10 to 40m large telescopes.

Some spectacular images from SPHERE This image shows the disc around the young AB Aurigae star, where ESO’s Very Large Telescope (VLT) has spotted signs of planet birth. Close to the centre of the image, in the inner region of the disc, we see the ‘twist’ (in very bright yellow) that scientists believe marks the spot where a planet is forming. This twist lies at about the same distance from the AB Aurigae star as Neptune from the Sun. The image was obtained with the VLT’s SPHERE instrument in polarised light. Credit: ESO/Boccaletti et al This spectacular image from the SPHERE instrument on ESO’s Very Large Telescope is the first clear image of a planet caught in the very act of formation around the dwarf star PDS 70. The planet stands clearly out, visible as a bright point to the right of the centre of the image, which is blacked out by the coronagraph mask used to block the blinding light of the central star. Credit: ESO/A. Müller et al.

Here is the first high angular resolution image of the Pallas asteroid using ESO SPHERE instrument. German astronomer Heinrich Wilhelm Matthäus Olbers first discovered Pallas on 28 March 1802. Named for the Greek goddess Pallas Athene, the asteroid — along with many other asteroids discovered in the 19th century — was initially classified as a planet. As time passed and technology improved, Pallas was later reclassified as an asteroid. Today it is famous for being the third-largest asteroid in the Solar System, with an average diameter of 512 km.  Although Pallas is the largest known asteroid in the Solar System after Ceres and Vesta, it is the only one of these large asteroids that has not been visited by a spacecraft. This is due to its orbit, which has an unusually high inclination to the plane of the Earth’s orbit — which means it is particularly challenging to land a spacecraft on.  These new images show that the surface of Pallas displays very interesting topographic features suggesting a violent collisional history. Numerous large craters are found in both hemispheres of Pallas, forming a surface resembling a golf ball. The two distinct large impact basins on its surface could also be related to a family-forming impact — a collision which caused an original object to fracture into several separate bodies. The bright spot which appears in the southern hemisphere of Pallas (right image) is also very reminiscent of the salt deposits on Ceres. Credit: ESO This spectacular image from the SPHERE instrument on ESO’s Very Large Telescope shows the dusty disc around the young star IM Lupi in finer detail than ever before. Credit: ESO/H. Avenhaus et al./DARTT-S collaboration This picture shows the SPHERE exoplanet instrument for the VLT just before it left France and was shipped to Chile in February 2014. Credit: SPHERE Project/ESO/J.-L. Beuzit and J.-F. Sauvage.

Within PlanetS, the astronomy department of the University of Geneva and the Institute of Particle Physics and Astrophysics of ETH Zurich are members of the SPHERE consortium. Both institutes received substantial funding from the SNF/FLARE grant (previously called FINES) for being part in this major international project.
Geneva was responsible for the conception, and realization of the SPHERE Calibration Unit, a sub-system that delivers different calibration lights to the 3 science instruments and to the AO system of the Common Path.  It also had a share of the systems engineering of the whole instrument by taking responsibility for all internal and external interfaces as well as organizing the final AIT phase. Geneva developed as well the telescope simulator for the tests and contributed to the development of observation planning tools (main people involved: F. Wildi, R. Dubosson, M. Crausaz, B. Michaud, L. Weber). On the science side, Geneva participated primarily to the SHINE survey and to some extend to the DISK survey (D. Segransan, S. Udry, J. Hagelberg, S. Peretti, E. Rickmann).
ETH Zurich was strongly involved in the concept, design, development, and testing of the Zurich Imaging Polarimeter (ZIMPOL) and the polarimetric concept of the SPHERE common path instrument (main people involved: H.M. Schmid (Co-I), D. Gisler, A. Bazzon, F. Joos, P. Steiner). On the science side, ETH participated primarily in the DISK and REFPLANETS GTO programs (C. Thalmann, E. Buenzli, A. Garufi, H. Avenhaus, N. Engler, S. Hunziker and C. Tschudi), and in the SHINE survey (M. Meyer, S. Quanz).
Categories: News