Volcanoes might light up the night sky of this planet 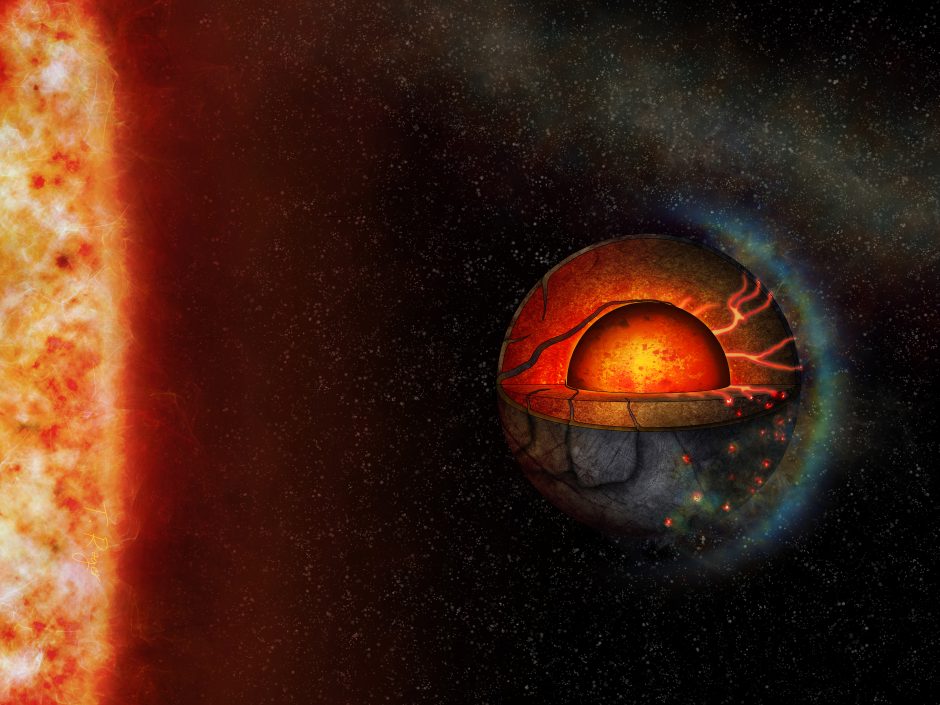 Until now, researchers have found no evidence of global tectonic activity on planets outside our solar system. Under the leadership of the University of Bern and the National Center of Competence in Research NCCR PlanetS, scientists have now found that the material inside planet LHS 3844b flows from one hemisphere to the other and could be responsible for numerous volcanic eruptions on one side of the planet. This artist’s illustration represents the possible interior dynamics of the super-Earth exoplanet LHS 3844b. The planet property and star strong irradiation might lead to an hemispheric tectonic regime. Illustration: Thibaut Roger

On Earth, plate tectonics is not only responsible for the rise of mountains and earthquakes. It is also an essential part of the cycle that brings material from the planet’s interior to the surface and the atmosphere, and then transports it back beneath the Earth’s crust. Tectonics thus has a vital influence on the conditions that ultimately make Earth habitable.

Until now, researchers have found no evidence of global tectonic activity on planets outside our solar system. A team of researchers led by Tobias Meier from the Center for Space and Habitability (CSH) at the University of Bern and with the participation of ETH Zurich, the University of Oxford and the National Center of Competence in Research NCCR PlanetS has now found evidence of the flow patterns inside a planet, located 45 light-years from Earth: LHS 3844b. Their results were published in The Astrophysical Journal Letters.

An extreme contrast and no atmosphere “Observing signs of tectonic activity is very difficult, because they are usually hidden beneath an atmosphere”, Meier explains. However, recent results suggested that LHS 3844b probably does not have an atmosphere. Slightly larger than Earth and likely similarly rocky, it orbits around its star so closely that one side of the planet is in constant daylight and the other in permanent night—just like the same side of the Moon always faces the Earth. With no atmosphere shielding it from the intense radiation, the surface gets blisteringly hot: it can reach up to 800°C on the dayside. The night side, on the other hand, is freezing. Temperatures there might fall below minus 250°C. “We thought that this severe temperature contrast might affect material flow in the planet’s interior”, Meier recalls.

To test their theory, the team ran computer simulations with different strengths of material and internal heating sources, such as heat from the planet’s core and the decay of radioactive elements. The simulations included the large temperature contrast on the surface imposed by the host star.

Flow inside the planet from one hemisphere to the other “Most simulations showed that there was only upwards flow on one side of the planet and downwards flow on the other. Material therefore flowed from one hemisphere to the other”, Meier reports. Surprisingly, the direction was not always the same. “Based on what we are used to from Earth, you would expect the material on the hot dayside to be lighter and therefore flow upwards and vice versa”, co-author Dan Bower at the University of Bern and the NCCR PlanetS explains. Yet, some of the teams’ simulations also showed the opposite flow direction. “This initially counter-intuitive result is due to the change in viscosity with temperature: cold material is stiffer and therefore doesn’t want to bend, break or subduct into the interior. Warm material, however, is less viscous – so even solid rock becomes more mobile when heated – and can readily flow towards the planet’s interior”, Bower elaborates. Either way, these results show how a planetary surface and interior can exchange material under conditions very different from those on Earth.

A volcanic hemisphere
Such material flow could have bizarre consequences. “On whichever side of the planet the material flows upwards, one would expect a large amount of volcanism on that particular side”, Bower points out.  He continues “similar deep upwelling flows on Earth drive volcanic activity at Hawaii and Iceland”.  One could therefore imagine a hemisphere with countless volcanoes – a volcanic hemisphere so to speak – and one with almost none.

“Our simulations show how such patterns could manifest, but it would require more detailed observations to verify. For example, with a higher-resolution map of surface temperature that could point to enhanced outgassing from volcanism, or detection of volcanic gases.  This is something we hope future research will help us to understand”, Meier concludes.