Returned asteroid samples may reveal secrets of the cosmos 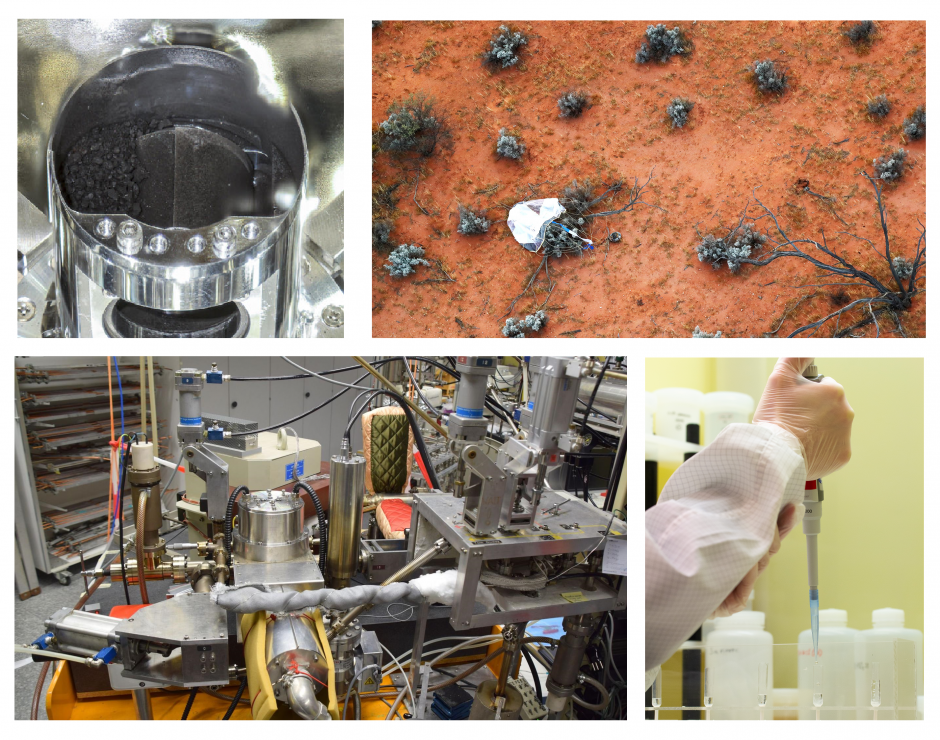 Samples taken from the asteroid Ryugu by the Japan Aerospace Exploration Agency (JAXA) Hayabusa2 mission have returned to Earth. Scientists of the Swiss National Centre of Competence in Research’s PlanetS programme hope to learn more about our own and other star systems from studying them and may find clues on the origin of life on Earth.

Were it not for the green shrubs and occasional dry trees, one might mistake it for the red surface of Mars. Even though it looks otherworldly, the re-entry capsule of the Hayabusa2 spacecraft landed at the Woomera Test Range in the Australian Outback. It had been released a few hours before flying past Earth, almost exactly six years after it was launched and travelled a total of 5.24 billion kilometers. The re-entry capsule and its parachute in the Australian outback. Image Credit: JAXA

On December 6th, the capsule and its precious cargo were recovered by the local authorities and the Japan Aerospace Exploration Agency (JAXA), who then sent it to Japan for analysis.

Black sands of Ryugu
On the 16th of December, the project Manager Yuichi Tsuda informed that the probing of Ryugu had indeed been successful and the capsule contained over five grams of black sand collected from the asteroid. The spacecraft collected the samples in February and July last year, both from the surface and the subsurface, which was revealed by an artificial impact that created a 10-meter wide crater. Tsuda said that “the asteroid extraterrestrial material that we dreamed about is now in our hands”.

A window to cosmic history and more
Ryugu is a near-Earth asteroid, currently located around 9 million kilometers from Earth. It is a so-called C-type asteroid and as such, it is thought to be almost unaltered since its formation, billions of years ago. As the asteroid formed, it may have built in pre-solar material – gas and dust from which also the Sun and our planet emerged. However, unlike on Earth, where geological processes have continuously changed the material, on Ryugu it has largely been conserved. “This makes it a great source of information about the conditions of the early solar system”, Martin Jutzi, senior researcher at University of Bern and NCCR PlanetS member, explains. To access the information, special instruments are required. One of the most precise such instruments in the world is the “Tom Dooley” mass spectrometer at ETH Zurich. It was specifically designed to measure the smallest amounts of gas and was already used to examine the returned asteroid samples of the original Hayabusa mission, that sampled another asteroid. “Back then, we used Tom Dooley to determine the exposure of the material to cosmic rays and learned about the surface activity of the asteroid”, Henner Busemann, a senior scientist at the Department of Earth Sciences and a member of the NCCR PlanetS, remembers. He and his collaborators are again part of the international science team that will likely get to examine gas samples and perhaps also some of the solid material. Acid treatment with which Ryugu samples could be analysed for their isotopes. Photo: Matthias Friebel

Also part of the science team is Maria Schönbächler, Professor at the Institute of Geochemistry and Petrology at ETH Zurich and also a PlanetS member. She is a specialist in high-precision isotope analyses (isotopes are atoms with different masses). Using such, she could investigate whether the material of the asteroid Ryugu is something completely new or whether similar bodies have already hit the Earth in the past. “To do this, individual elements of the sample have to be separated by acid treatment,” she says. However, she would need a few milligrams of material to carry out the analyses. It is not yet clear whether this will be available.

Apart from information about the solar system, the samples may hold clues about the origin of water, organic molecules, and, by extension, the history of life on Earth as similar asteroids may have impacted on Earth in its early history. Martin Jutzi, who has studied Ryugu for years, hopes to learn more about it by comparing the results of the probe analyses with his computer simulations of the formation and evolution of small cosmic bodies as well as previous surface images of the asteroid. “The examination of the returned probes will likely lead to significant scientific insights”, Jutzi concludes.