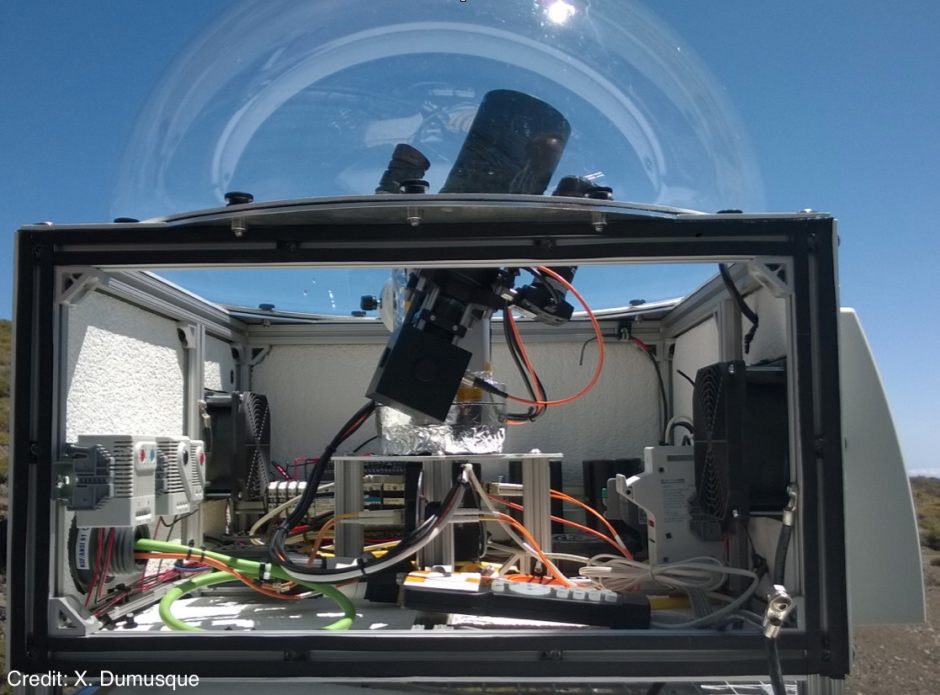 In order to better characterize the noise introduced by stars when searching for new exoplanets, five years ago the HARPS-N spectrometer, mounted on the Telescopio Nationale Galileo, was equipped with a small dedicated solar telescope. The data acquired by this telescope during the first three years of observations – collected every five minutes on all clear days – have now been made public and available to anyone

The Radial Velocity (RV) technique was the first efficient method to detect worlds orbiting stars other than the Sun and used by Michel Mayor and Didier Queloz, to discover the first exoplanet. Enormous progress has been made on the instrumentation side and the latest generation of hardware should be capable of detecting other Earths, even though the induced signal is very weak. At present, however, perturbing signals from the stars themselves limit our sensitivity. The next breakthroughs will come from understanding how to separate stellar signals from planetary motion.

The key difficulty is clearly seen on the Sun, whose visible surface seethes with millions of rising and falling pockets of gas whose pattern changes every few minutes. The magnetic fields surrounding dark sunspots suppress their motion. The sunspots themselves block light, changing their velocity as the Sun spins on its axis once a month. And all those phenomena vary in time with the overall level of activity rising and falling with the 11-year sunspot cycle. These processes change the Sun’s apparent velocity by amounts hundreds of times greater than the signal of an Earth-like planet. Understanding these complex processes requires exceptional data if we are to develop techniques to compensate for them. « Transferring these techniques to other stars, whose surfaces we cannot observe directly, will enable the detection of other Earths, aiding the long-term goal of the search for life on alien worlds », explained Xavier Dumusque, assistant Professor at the University of Geneva, and member of PlanetS. A member of the team installing the small solar telescope

In order to obtain the required data set, an international team composed of scientists from the Harvard-Smithsonian Center for Astrophysics (USA) and the University of Geneva (Switzerland) built a low-cost solar telescope (LCST) in 2015 and connected it to the HARPS-N spectrograph, the most precise instrument to discover exoplanets at the time. On July 18th 2015, the team started observing the Sun every clear day with a 5-minute cadence from the Telecopio Nationale Galileo (TNG) facility in La Palma, Spain. Ennio Poretti, the director of the TNG, is extremely pleased about this data release, as “the coupling between HARPS-N and the LCST makes the TNG a structure that operates not only every night, but also every day of the year.

“Our challenge of building a simple, robust instrument to observe the Sun has been amply rewarded with the rich, unique data set provided by the LCST coupled to HARPS-N” said David Phillips, senior researcher at the Harvard-Smithsonian Center for Astrophysics, USA. This data set already enabled the examination of the physical processes that drive intrinsic stellar radial-velocity variations. “The released data are unprecedented in terms of precision and size.Preliminary analysis show that by using those data, it is possible to significantly mitigate stellar signals by a factor of two » explain Xavier Dumusque, « therefore, enabling the detection of planet nearly twice as small as what was possible before ».

Those data are now accessible via the Data & Analysis Centre for Exoplanets (https://dace.unige.ch/) hosted at the University of Geneva and PlanetS.