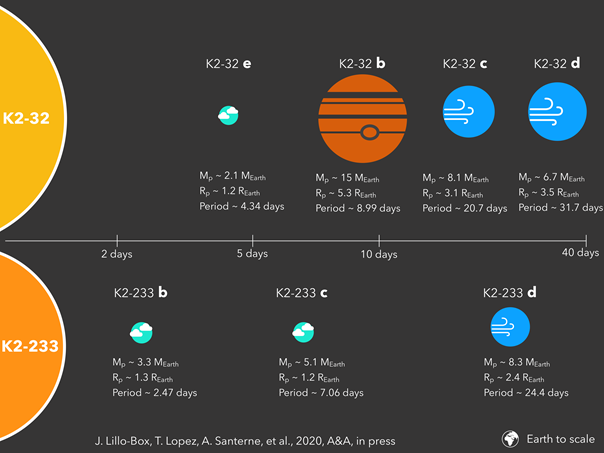 PlanetS astronomers associated with an international team have estimated the density of the planets in two planetary systems. Discovered by the Kepler satellite, K2-32 and K2-233 are planetary systems with 4 and 3 planets respectively. The diameters of the planets have been measured by Kepler thanks to the transit method which uses the obscuration of the star when the planet passes in front of it. It was then necessary to measure the mass in order to obtain the density. The researchers therefore used the HARPS spectrograph designed and built in Geneva and installed at the La Silla Observatory in Chile.

The four planets in the K2-32 system are of particular interest to astronomers because they are small and rocky and therefore reminiscent of our solar system on a smaller scale. In addition, they form a chain of resonance that could provide crucial information on the history of their formation and evolution. Indeed the orbital periods of the planets around K2-32 have the ratios of 1:2:5:7 which also provides information on the process of migration of the planets.

Even if the planets of K2-233 do not present a resonance chain, they are not at all that uninteresting. According to Kepler’s data they are also small and rocky and more over they orbit a young star. This is the first time that researchers have been able to estimate the density of small planets revolving around a star younger than a billion years (360 millions). According to the results deduced from Kepler’s photometric data, the planets of both systems have the following characteristics:

To determine the masses, and consequently the densities of these 7 planets, the astronomers took some 124 measurements of radial velocities of K2-233 with the HARPS spectrograph and 199 measurements of K2-32 to which they added 45 public measurements. By measuring variations in the radial velocities of stars due to the gravitational influence of a planet, scientists can determine the mass of the planet that causes the star to oscillate. This technique has been widely used since Michel Mayor and Didier Queloz, developed it for the discovery of the first exoplanet in 1995 and for which they received the Nobel Prize last year.

Once the radial velocities have been established, the influence of stellar activity on them must also be taken into account. For example, the star may be subject to pulsations or contain spots that could be interpreted as the presence of one or more planets. This is why knowledge of the star is paramount. The researchers used stellar models based on photometric measurements to determine the characteristics of the two stars. « Measuring the mass of planets in such systems is tricky as the stellar activity signal is many times larger than the Doppler motion induced by the planets » explains Louise Dyregaard Nielsen from the Geneva University and co-author of the research. The characteristics of the K2-32 system are detailed in Figure 3. « It is noteworthy that the architecture of this system looks a bit like a reduced version of the solar system, with an inner rocky planet followed by a gas giant (sub-Saturnal density) and two outer mini-Neptunes » says Louise Dyregaard Nielsen, « the system however is densely packed with more than 30 earth masses within less than Mercury’s orbit » As for the K2-233 system, shown in the same figure, it is quite different with two small rocky planets and a Neptune. However, this is the first time that a planetary system linked to a young star has been characterized and that rocky planets have been identified around this type of star.  After the discovery of rocky planets around solar-type stars, then around cold stars, the detection of a small planet around a young star brings an additional brick to the understanding of the history of the formation of exoplanets.

These three small rocky planets that might resemble the Earth quickly raise the question of whether life could develop on one of them. The researchers have therefore used their models to answer this question, which is answered in the negative. Indeed the estimated temperatures are 1060 °K for K2-32e, 1170 °K for K2-233b and 820 °K for K2-233c, all  incompatible with a possible presence of life.