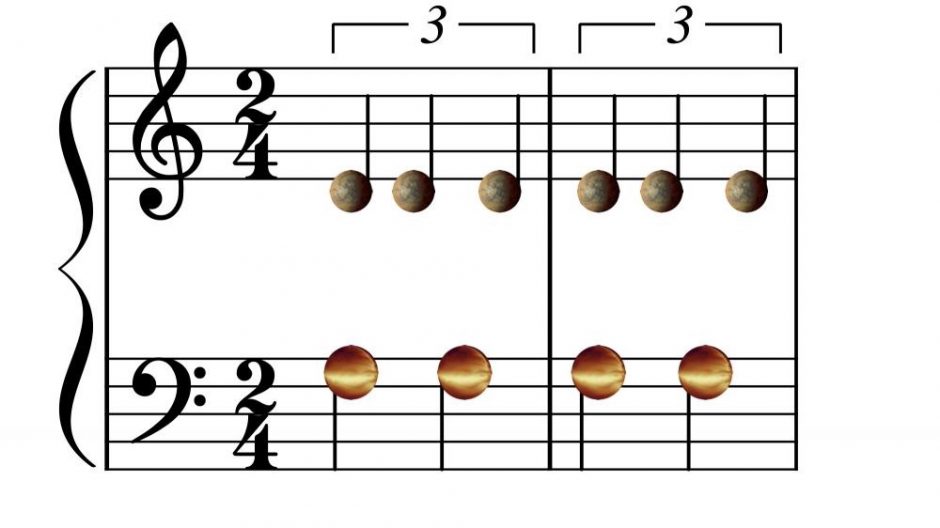 An international team lead by researchers of PlanetS and the University of Geneva has discovered a six-planets system.

Almost visible to the naked eye in the Draco constellation, the star HD 158259 has been observed for the last seven years by astronomers using the SOPHIE spectrograph. This instrument, installed at the Haute-Provence Observatory in the South of France, acquired three hundred measurements of the star. The analysis of the data which was done by an international team lead by researchers from PlanetS and the University of Geneva, has lead to the discovery that that the star HD 158259 has six planetary companions: a “super-Earth” and five “mini-Neptunes”. These planets display an exceptionally regular spacing, which hints of how the system may have formed. This study, published in the journal Astronomy & Astrophysics, also includes TESS space telescope observations of the star, which unveil the density of the innermost planet.

The SOPHIE measurements of HD 158259 allows the radial velocity of the star to measured with great precision that is its velocity of the star in the direction of the line of sight. It is the same type of measurements that lead to the discovery of 51 Peg b by the 2019 Nobel Prize winners Michel Mayor and Didier Queloz, in 1995. What’s more, the detection of 51 Peg b and of the six planets of HD 158259 was done using the same telescope. However, unveiling a system with such small planets would not have been feasible back in 1995, nor at the installation of SOPHIE back in 2006. “The discovery of this exceptional system has been made possible thanks to the acquisition of a great number of measurements, as well as a dramatic improvement of the instrument and of our signal processing techniques”, says François Bouchy, professor in the Department of astronomy of the Faculty of science of UNIGE and coordinator of the observational program. “This is great work and shows the important role smaller telescopes play in furthering the advances of astronomy through high quality research using old, but well funded observatories”, adds Paul A. Wilson, researcher at the University of Warwick and co-author of the study. Configuration of the system estimated from the RV at the time of conjunction estimated by TESS (BJD 58766.049072).

SOPHIE observations showed that the planet that is closest to HD 158259 and the five outer planets present masses of two and six times that of the Earth, respectively. The system has been found to be compact, in the sense that the distance of the outermost planet to its star is 2.6 times smaller than the distance between Mercury and the Sun. Furthermore, NASA’s TESS space telescope observed a decrease of the star’s brightness as the innermost planet transited between the observer and the star. “The TESS measurements strongly support the detection of the planet and allow to estimate its radius, which brings very valuable information on the planet’s internal structure”, says Isabelle Boisse, researcher at the Marseille Astrophysics Laboratory and co-author of the study.

Hundreds of multi-planetary systems are known, but only a dozen contain six planets or more. The presence of six planets orbiting HD158259 thus already makes this system remarkable, but it not its most interesting feature: what makes it exceptionnal is its regularity. Indeed, the period ratio of any two subsequent planets is close to 3:2. This means that as the first planet – the one closest to the star – completes three orbits, the second one completes about two. As this second planet completes three orbits, the third completes about two, and so on. In the planetary system HD 158259, all pairs of subsequent planets are close to the 3:2 resonance : the inner one completes about three orbits as the outer completes two.© UNIGE/NASA

This situation is better understood in the general framework of “resonances”, which plays a key role in the architecture of planetary systems. Several planets are said to be in resonance when they find themselves in the same configuration periodically, after completing a potentially different number of orbits. “This is comparable to several musicians beating distinct rhythms, yet who beat at the same time at the beginning of each bar”, says Nathan C. Hara, researcher at the Department of astronomy of the Faculty of science of UNIGE, member of the NCCR PlanetS and first author of the study. Planets can also be close to the resonance, but not exactly within. This is the case of the planets of HD 158259.

Inferring the history of the system

Why is this system interesting? One of the goals of the study of planetary systems is to understand their formation. On this subject matter, several questions are still debated. In particular: do the planets form close to their final position in the system, or do they move across the system after they have formed? This latter scenario, called planetary migration, seems to explain the formation of the six planets of HD 158259. “Several compact systems with several planets in, or close to resonances are known, such as TRAPPIST-1 or Kepler-80. Such systems are believed to form far from the star before migrating towards it. In this scenario, the resonances play a crucial part”, says Stephane Udry, professor at the Department of astronomy of the Faculty of science of the UNIGE and co-director of the NCCR PlanetS.

In HD 15829’s system, when a planet completes three orbits, its closest outer neighbour completes about two. “Here, “about” is important. Besides the ubiquity of the 3:2 period ratio, this constitutes the originality of the system”, says Nathan Hara. The planets are close to the resonance, but not exactly within. This suggests that the planets used to be trapped in resonance in the past, migrated synchronously, then moved away from the resonance. “Furthermore, the current departure of the period ratios from 3:2 contains a wealth of information. With these values on the one hand, and tidal effect models on the other hand, we could constrain the internal structure of the planets in a future study. In summary, the current state of the system gives us a window on its formation”, concludes the Geneva-based researcher.

Original press release of University of Geneva (in french)