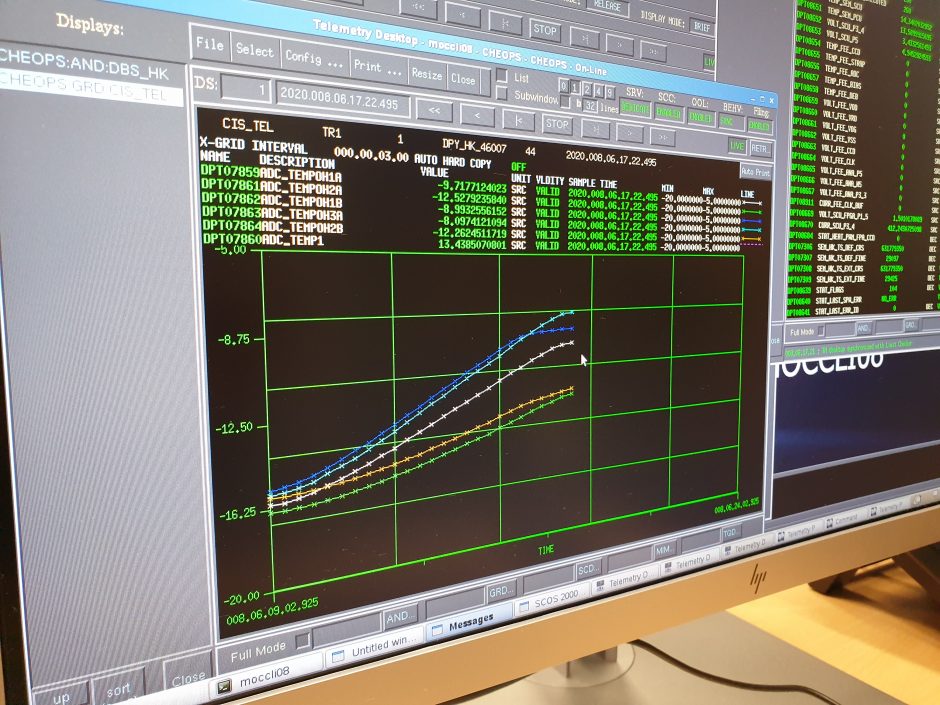 Before Christmas, on 18 December 2019, a Soyuz Fregat rocket was launched in Kourou, French Guyana, and put ESA’s CHEOPS space telescope into a precise polar orbit. Now the engineers test all systems aboard. Today, the computer was successfully booted.

Since CHEOPS is in Orbit, its systems have been gradually ramped up. So far, ESA has tested the satellite platform and has confirmed that these systems work. After the holidays, the CHEOPS team met in Madrid, Spain, earlier this week to start up the telescope.

Today, Wednesday 8 January at 5.30 a.m., the engineers booted the telescope’s computer and the two electronics boxes. “Everything worked perfectly,” confirms Thomas Beck, CHEOPS Payload System Engineer from the University of Bern. The instruments on board had reacted as expected. “The telescope’s heating elements are switched on, which means that the temperature is brought from about -15° C to a constant operating temperature of -10° C,” says Beck. On the screen, the engineers can follow how the heating elements bring the telescope to operating temperature. Credit: Thomas Beck, University of Bern

In a next step, Beck and his colleagues will switch on the focal plane with the CCD camera – the heart of the system for recording the brightness of observed stars – tomorrow Thursday. A test image will then be taken with the telescope cover still closed. “This picture will of course still be dark,” explains Thomas Beck. “It will basically provide us with information as to whether the CCD is working properly.”

The big moment finally comes on Monday, 27 January 2020. Then the CHEOPS cover will be opened according to plan. “Everybody here is looking forward to that day,” says Beck. “Once the cover’s open, we’ll run final tests on the systems before our scientists can begin collecting data.”

To mark this morning’s activities, Prof. Willy Benz, head of the CHEOPS mission, was a “morning guest” on Radio SRF 1 this morning. With the satellite tracker you can see where CHEOPS currently is.

If you want to know which point on earth CHEOPS is located above, you will find a world map with the current position of the satellite on the website of the CHEOPS consortium.