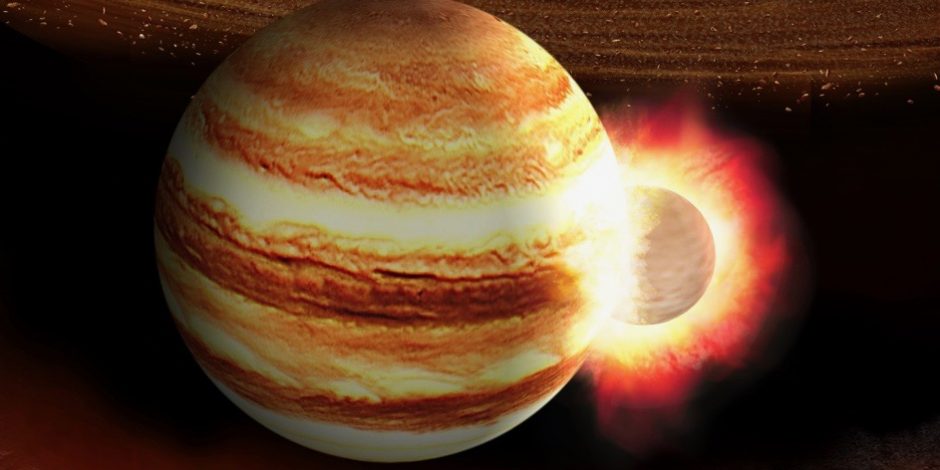 New interior models of Jupiter based on data gathered by NASA’s Juno mission suggested that the giant gas planet might not have a small compact core but rather a diluted, “fuzzy” one. Now, an international team with researchers of the University of Zürich and the NCCR PlanetS has found an explanation for this surprising Juno result. A giant impact occurring shortly after Jupiter’s formation may have disrupted and diluted its original compact core. An artist’s impression of a collision between young Jupiter and a massive planetary embryo. (Credit: Astrobiology Center, Japan)

NASA’s Juno probe orbiting Jupiter since July 2016 has not only delivered stunning images but also unexpected results about the interior of the planet. To fit the very accurate gravity data of Jupiter measured by Juno, researchers had to revise their ideas about the planet’s core. “Instead of a small compact core as we previously assumed, Jupiter’s core is “fuzzy””, explains Ravit Helled. She is professor at the University of Zürich, member of the NCCR PlanetS and team member of the Juno mission: “This means that the core is likely not made of only rocks and ices but is also mixed with hydrogen and helium and there is a gradual transition as opposed to a sharp boundary between the core and the envelope.”

How come? “One could make the joke and say that when planetary scientists cannot find a solution they invoke a giant impact,” says Ravit Helled. Not a joke, but a good explanation in this case, as an international team with researchers from China, Japan, Switzerland and the US shows in its paper published by the journal “Nature”. Lead author Shang-Fei Liu, now professor at Sun Yat-sen University in Zhuhai, China, simulated different collisions between the young Jupiter and planetary embryos. The results of the computer simulations presented in the paper demonstrate that such a collision actually could have shattered Jupiter’s primordial compact core and mixed the heavy elements with the inner envelope. But it needed an enormous impactor 10 times the mass of Earth and the collision had to be head-on.

Simulating evolution over billions of years

Interested in Liu’s research Ravit Helled invited him for a research stay in Zürich. Together they wanted to find out whether the diluted core produced by the giant impact could persist over billions of years until today. “For that we used our newly developed planet evolution code,” explains the Zürich professor. PhD student Simon Müller had worked on the code as part of his doctoral thesis and he also ran the simulations of Jupiter’s evolution. “We are talking about very different timescales,” Simon Müller clarifies. “Giant impacts occurred early in the history of the solar system and lasted for a short time, while the evolution is a long process up to today, 4,5 billions of years after Jupiter’s formation.” These different timescales require separate computational methods for the impact and the thermal evolution.

The Swiss part of the collaboration took the output of the giant impact simulation as an input for the evolution calculation to follow the heat transport and the mixing of heavy-elements within the planet. It was shown that, depending on the assumed parameters, there are solutions with a diluted core that persist until today. “That makes the case for the giant impact much stronger,” says Ravit Helled. Other co-authors of the study looked at the statistics of the impacts and found out that such a head-on collision with a big impactor seems very likely.

“Everyone had a unique contribution, and this research is remarkably international. So, it was a really nice and rather diverse collaboration,” summarizes Ravit Helled: “It seems that such violent impacts were very common in the young solar system and interestingly, they played an important role in shaping the planetary characteristics – not only for Jupiter – as we suggest in this paper – but also for other planets – to explain the Earth’s moon, the high metal-to-rock fraction in Mercury, and Uranus’ tilt.”

Snapshots of density distribution during a merger event between a proto-Jupiter and an impactor with 10 Earth masses. (Credit: Shang-Fei Liu)