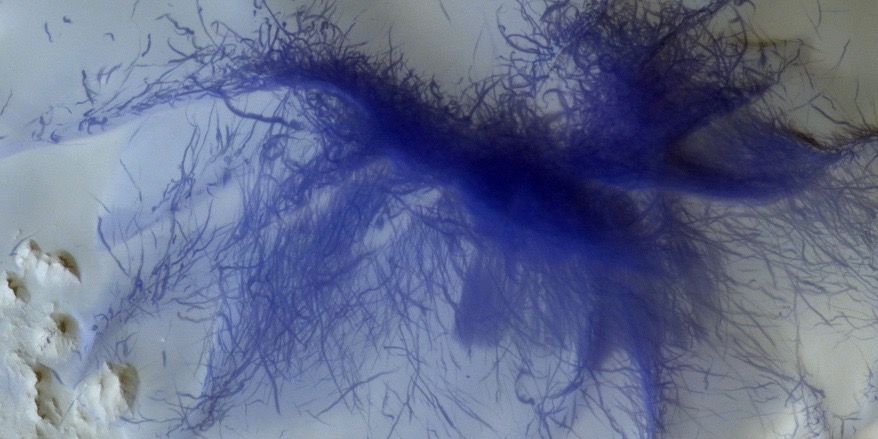 This mysterious pattern sits on the crest of a ridge, and is thought to be the result of dust devil activity â€“ essentially the convergence of hundreds or maybe even thousands of smaller martian tornadoes. (Image ESA/Roscosmos/CaSSIS)

The Colour and Stereo Surface Imaging System (CaSSIS) was developed by an international team led by Nicolas Thomas, professor at the University of Bern and member of the NCCR PlanetS. CaSSIS orbits Mars on board the European ExoMars Trace Gas Orbiter (TGO). Amongst a new showcase of images is one of NASAâ€™s InSight lander. Images of the lander have already been returned by NASAâ€™s Mars Reconnaissance Orbiter, this is the first image of TGO.

â€śThe TGO is being used to relay data from InSight to Earth,â€ť says Nicolas Thomas. â€śBecause of this function, to avoid uncertainties in communication, we had not been able to point the camera towards the landing site so far â€“ we had to wait until the landing site passed directly under the spacecraft to get this image.â€ť The CaSSIS image was captured on 2 March 2019 and shows InSight as a slightly brighter dot in the centre of the dark patch produced when the lander disturbed the surface dust. â€śThe InSight landing site image is just one of many really high quality images that we have been receiving,â€ť says Nicolas Thomas. Other images show detailed views of layered deposits in polar regions, the dynamic nature of Mars dunes, and the surface effects of converging dust devils.