Home  ›  News  ›  Better to dry a rocky planet before use

Better to dry a rocky planet before use 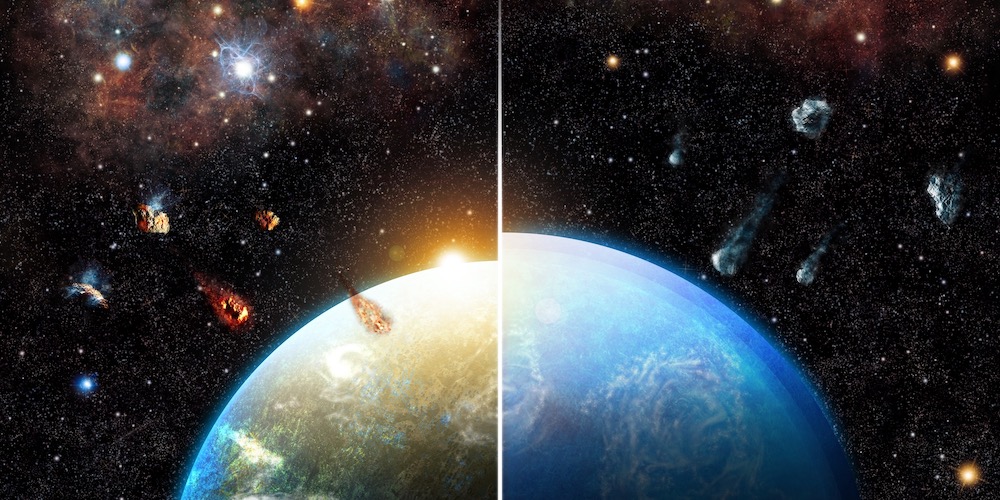 Earth’s solid surface and clement climate may be in part due to a massive star in the birth environment of the Sun. Without its radioactive elements injected into the early solar system, our home planet could be a hostile ocean world covered in global ice sheets. This is the result of computer simulations of planet formation, as NCCR PlanetS researchers report in the journal “Nature Astronomy”. Water covers more than two thirds of the surface of the Earth, but in astronomical terms the inner terrestrial planets of our solar system appear very dry – fortunately, because too much of a good thing can do more harm than good. If the water content of a rocky planet is significantly greater than on Earth, the silicate mantle is covered by a deep, global ocean and an impenetrable layer of ice on the ocean floor. This prevents geochemical processes, such as the carbon cycle on Earth, which stabilize the climate and create surface conditions conducive to life as we know it. “So, it seems we were just extraordinarily lucky. Were we? Or are there systematic effects at play that distinguish solar system-like planetary systems from others?” Tim Lichtenberg asked when he started working on his doctoral thesis at the institutes of Astronomy and Geophysics at ETH Zurich.

Together with colleagues from the universities of Bayreuth, Bern, and Michigan, he developed computer models to simulate the formation of planets from their building blocks, the so-called planetesimals – rocky-icy bodies of probably dozens of kilometers in size. During the birth of a planetary system the planetesimals form in a disk of dust and gas around the young star and grow into planetary embryos. “Current thinking goes that Earth inherited most of its water from such partly water-rich planetesimals,” explains Lichtenberg, who now works as a postdoctoral fellow at the University of Oxford. “But if a terrestrial planet accretes lots of material from beyond the so-called snowline, it receives way too much water.” As it turns out, however, if these planetesimals are heated from the inside, part of the initial water ice content evaporates and escapes to space before it can be delivered to the planet itself.

Exactly this may have happened shortly after the birth of our solar system 4.6 billion years ago and may still be ongoing in numerous places in the galaxy, as primeval traces in meteorites suggest. Right when the proto-Sun formed, a supernova occurred in the cosmic neighborhood. Radioactive elements including Aluminium-26 (Al-26) were fused in this dying massive star and got injected into our young solar system, either from its excessive stellar winds or via the supernova ejecta after the explosion. The decaying Al-26 then heated and dried water-delivering planetesimals from the inside. In their computer models, the researchers were now able to demonstrate that the radiogenic heating of solar-like or higher Al-26 levels in a forming planetary system systematically dehydrates planetesimals prior to accretion onto planetary embryos.

“We then used the so-called Bern Model of planet formation and evolution to investigate what kind of planets are formed from the different planetesimals,” explains Christoph Mordasini, Professor at the University of Bern. The researchers simulated the formation of thousands of planets and investigated in particular their final water content. “The results of our simulations suggest that there are two qualitatively different types of planetary systems,” summarizes Lichtenberg: “There are those similar to our solar system, whose planets have little water. In contrast, there are those in which primarily ocean worlds are created because no massive star, and so no Al-26, was around when their host system formed. The presence of Al-26 during planetesimal formation can make an order-of-magnitude difference in planetary water budgets between these two species of planetary systems.”

Further questions remain, and future work will, for instance, need to investigate how Al-26 dehydration plays together with the growth of forming giant planets, such as proto-Jupiter in the early solar system. The quantitative predictions from this work will help near-future space telescopes, dedicated to the hunt for extrasolar planets, to track potential traces and differences in planetary compositions, and refine the predicted implications of the Al-26 dehydration mechanism. And so the researchers are eagerly awaiting the launch of upcoming space missions, with which Earth-sized exoplanets outside our solar system will be observable. These will bring humanity ever-closer to understanding whether our home planet is one of a kind, or if there are ‘an infinity of worlds of the same kind as our own’.