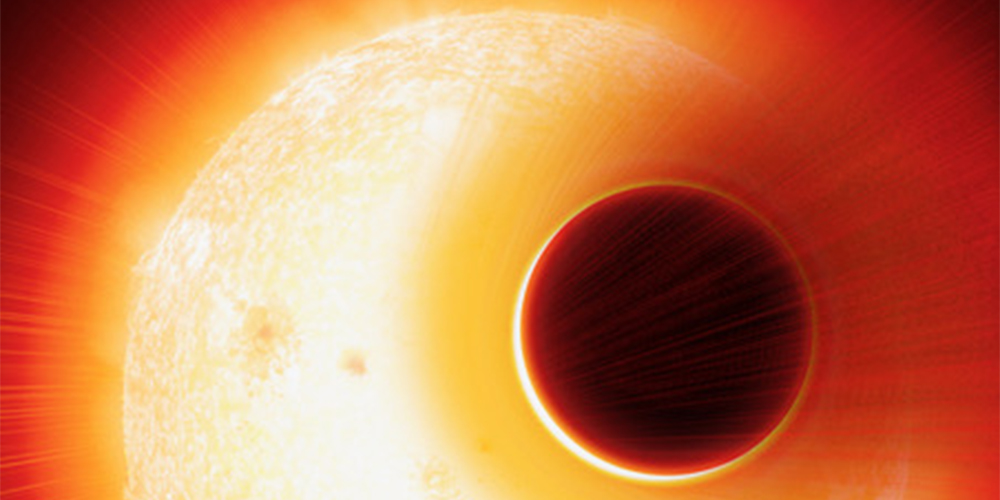 Researchers from UNIGE and members of the NCCR PlanetS have found helium in the atmosphere of an exoplanet, swollen like a balloon.

Although helium is a rare element on Earth, it is ubiquitous in the Universe. It is, after hydrogen, the main component of stars and gaseous giant planets. Despite its abundance, helium was only detected recently in the atmosphere of a gaseous giant by an international team including astronomers from the University of Geneva (UNIGE) and members of the NCCR PlanetS. The team, this time led by Genevan researchers, has observed in detail and for the first time how this gas escapes from the overheated atmosphere of an exoplanet, literally inflated with helium. The results are published in Science.

Helium is the second most abundant element in the Universe. Predicted since 2000 as one of the best possible tracers of the atmospheres of exoplanets, these planets orbiting around other stars than the Sun, it took astronomers 18 years to actually detect it. It was hard to spot due to the very peculiar observational signature of helium, located in the infrared, out of range for most of the instruments used previously. The discovery occurred earlier this year, thanks to Hubble Space Telescope observations, which proved difficult to interpret. Team members from UNIGE, members of the National Centre for Competence in Research PlanetS, had the idea of pointing another telescope equipped with a brand-new instrument – a spectrograph called CARMENES.

Detecting colours of planets with CARMENES

A spectrograph decomposes the light of a star into its component colours, like a rainbow. The “resolution” of a spectrograph is a measure indicating the number of colours that can be revealed. While the human eye cannot distinguish any colour beyond red without an adapted camera, the infrared eye of Hubble is capable of identifying hundreds of colours there. This proved sufficient to identify the coloured signature of helium. The instrument CARMENES, installed on the 4-metre telescope at the observatory of Calar Alto in Andalusia, Spain, is capable to identify more than 100’000 colours in the infrared!

This high spectral resolution allowed the team to observe the position and speed of helium atoms in the upper atmosphere of a gaseous Neptune-size exoplanet, 4 times larger than the Earth. Located in the Cygnus (the Swan) constellation, 124 light-years from home, HAT-P- 11b is a “warm Neptune” (a decent 550°C!), twenty times closer to its star than the Earth from the Sun. “We suspected that this proximity with the star could impact the atmosphere of this exoplanet” says Romain Allart, PhD student at UNIGE and first author of the study. “The new observations are so precise that the exoplanet atmosphere is undoubtedly inflated by the stellar radiation and escapes to space”, he adds. Image of an artist representing a fleet of ships sheltering in the shadow of the planet, and under the helium wind of the planet, to celebrate the harvest of this abundant gas in this planetary system (credit Denis Bajram).

A planet inflated with helium

These observations are supported by numerical simulation, led by Vincent Bourrier, co-author of the study and member of the European project FOUR ACES. Thanks to the simulation, it is possible to track the trajectory of helium atoms: “helium is blown away from the day side of the planet to its night side at over 10’000 km/h”, Vincent Bour- rier explains. “Because it is such a light gas, it escapes easily from the attraction of the planet and forms an extended cloud all around it”. This gives HAT-P-11b the shape of a helium-inflated balloon.

This result opens a new window to observe the extreme atmospheric conditions prevailing in the hottest exoplanets. The CARMENES observations demonstrate that such studies, long thought feasible only from space, can be achieved with greater precision by ground-based telescopes equipped with the right kind of instruments. “These are exciting times for the search of atmospheric signatures in exoplanets”, says Christophe Lovis, senior lecturer at UNIGE and co-author of the study. In fact, UNIGE astronomers are also heavily involved in the design and exploitation of two new high-resolution infrared spectrographs, similar to CARMENES. One of them, called SPIRou, has just started an observational campaign from Hawaii, while the UNIGE Department of astronomy houses the first tests of the Near Infrared Planet Searcher (NIRPS), which will be installed in Chile at the end of 2019. “This result will enhance the interest of the scientific commu- nity for these instruments. Their number and their geographical distribution will allow us to cover the entire sky, in search for evaporating exoplanets”, concludes Lovis.

FOUR ACES, Future of Upper Atmospheric Characterisation of Exoplanets with Spectroscopy, is a project funded by a Consolidator grant of the European Research Council (ERC) under the European Unions’s 2020 Research and Innovation Programme (grant agreement n°724427).