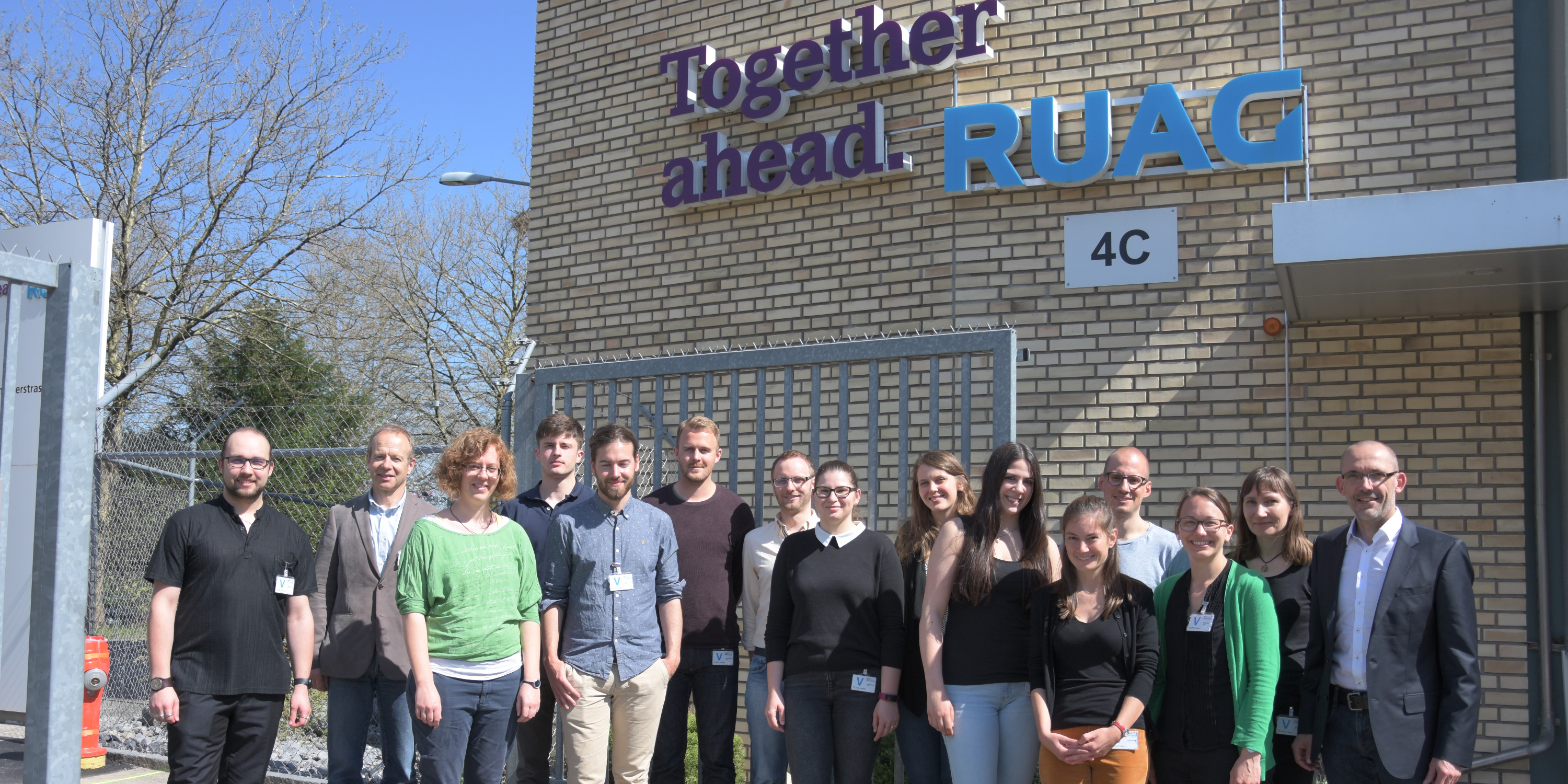 “Apéro might be the most important thing in an event”

Those words might make you smile and think it’s not very professional, but from a certain point of view, it makes a lot of sense, as many PlanetS juniors learnt amongst many other advices during a workshop in Zürich, mid-April, regarding the Links between Industry and Academia.

According to a 2011 Swiss survey, 54.5% of people who got a PhD, were working in an area outside academia one year after they finished their PhD, and the long postdoc phase is also problematic for private industries […] to recruit best-qualified personnel at a timing where it is still flexible. Other US studies from AIP show similar rates for Physics PhD holder, but this rate decrease to 20% regarding astronomy, with part of the 80% continuing in postdoc seeing this more as a necessity for future employment than as a choice. Other people also compared “the statistical odds of a long-term career in astronomy to the chances of becoming a professional athlete“. It was therefore interesting for the juniors of PlanetS to get an overview of the other possibilities they could have in the domain of astronomy and space.

That is why, a workshop was organised with the support of the Academic Platform on April 17th 2018. The format was a bit different than other workshops, here, no scientific results. The emphasis had been put on sharing experiences regarding the links between Academia and Industry, and how to transition from one to another. To that extent, the first part of the day was dedicated to 5 talks, two from PlanetS members, and 3 from external guests. While the second part of the day consisted of a visit of the company RUAG Space AG in Zürich, one of the leader in aerospace industry. First to share his experience, was Sascha Quanz. He answered the top 10 questions he is usually asked by people regarding the couple of years he spent working in a management consulting agency. A work we often hear about as a possible career out of academia, but which is obviously very obscure to the juniors of PlanetS given the number of additional questions who followed regarding the job. So why is it that management consulting is a possible career and that we qualify as physics PhD/Postdocs? It is because of our analytical mind, we are trained to problem solving, and also, thanks to conferences and other events, we have good communication skills. If the career of management consulting is very intense and might not be for a long duration, it was still interesting for Sascha to discover other things, specially if you provide help to company in different domains (you can usually choose who to help so you can build your own profile). One of the main point I think to remember, that Sascha insisted we should not underestimate, is that performing management consulting for a couple of years, helps you to develop a very good network.

The importance of someone’s network was also emphasised by Claudia Röösli. After a master and a PhD in geomatic, seismology and glaciology, she went working for Swiss Space Office as an Earth Observation specialist, where one of her main task was to connect all the players and do networking to support space activities in Switzerland. She is now working in R&D and project management at UZH in the frame of ESA’ GlobDiversity project with several academia and industrial partners. She gave us tips and tricks how to develop our employability out of academia, that we need to learn to promote ourselves, that we should not be shy, or that Python is better than other things like Matlab because it is more used out of academia. That was one of her numerous tips, that the apéro might be one of the most important moments during an event, maybe it be a conference or anything else. It is not for the drinks or the food, but for the networking. That is something I could also personally experience, as people, specially seniors, might be more accessible to discuss with during those moments than during coffee breaks at a conference. 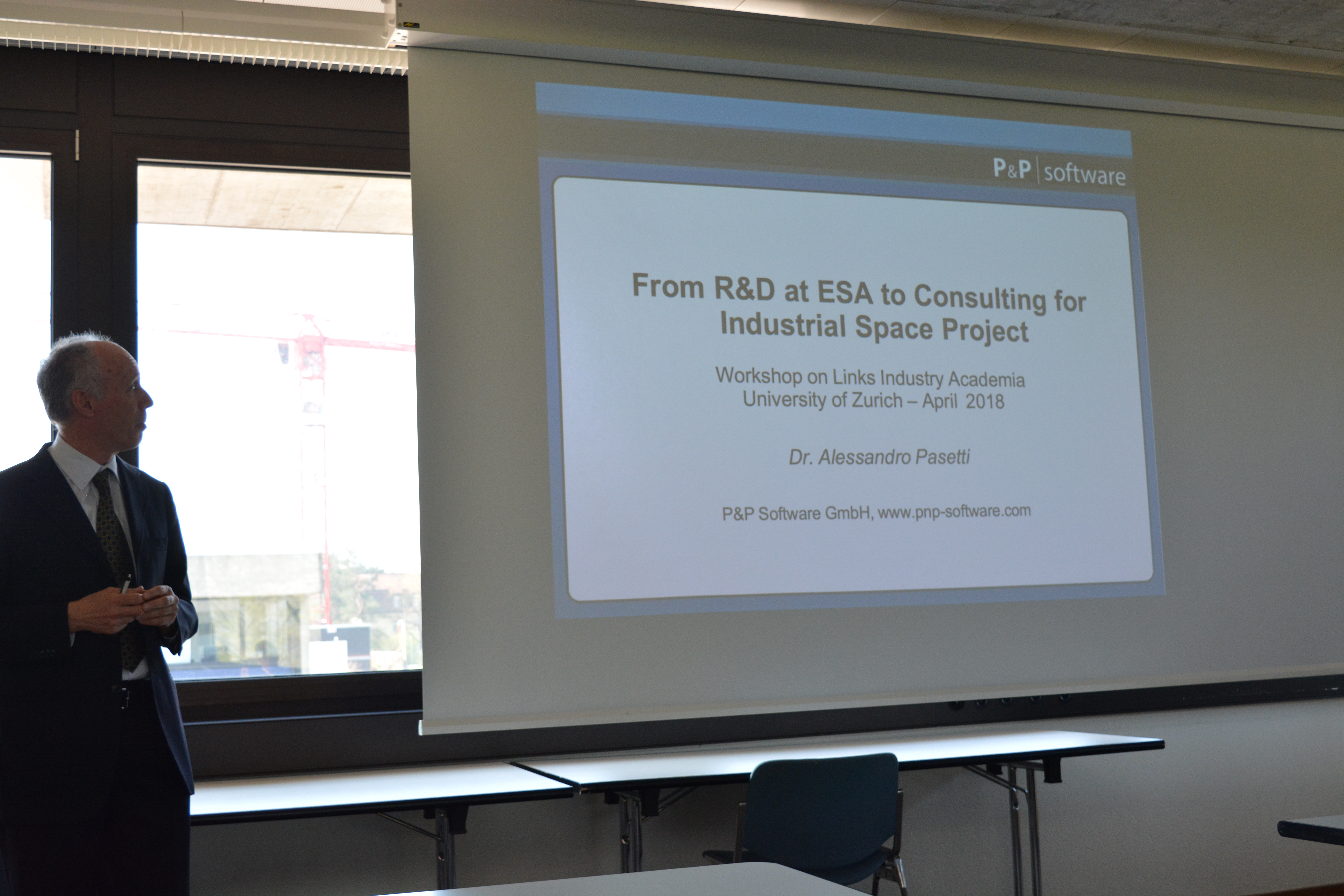 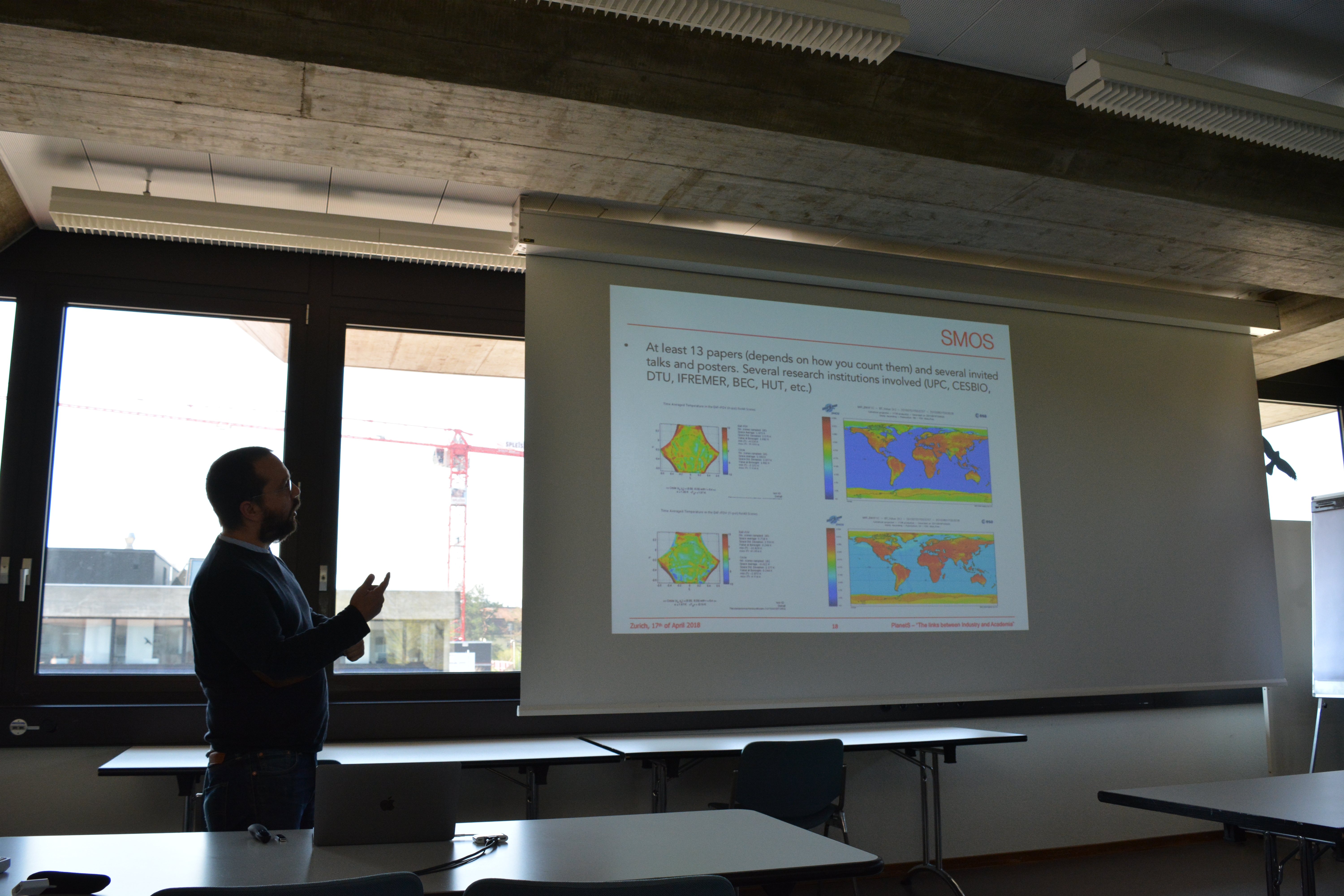 On a different note, Alessandro Pasetti, compared the research in Industry and Academia and discussed how things work in both cases. He worked nine years for ESA as Technical Directorate (conducts R&D activities with both academia and industry, and reviews on-going ESA projects), before to be university researcher for 5 years, and finally be consultant on industrial space project for 14 years. He listed the various steps that really matters in research, e.g: be the first one to get a great idea, be the first one to build a prototype out of it, the first to turn it into an industrial product or to use it in space. The main difference between research in academia and industry, is that academia aims for “the best”, to find and optimise the solutions, while industry aims for “enough” to minimise costs and schedule.

José Barbosa, specialised in Earth Observations, also provided nice insights on his experiences. He worked as a doctoral student on the ALICE experiment of the CERN, before to work on software development in industry in telecommunications before to be head of the Data Processing Division at DEIMOS Engenharia. Finally, in 2014, he founded the single-man company Research and Development in Aerospace GmbH, working mainly on Earth Observation Ground Segment projects. He noticed than interestingly, industry is much more diverse in terms of people backgrounds than academia, and that you can go from a PhD to engineer in software development, specially as the space sector welcomes PhD contrary to other domains. He also discussed some aspects of company funding/management, debunking some myth regarding that. You don’t need a hug financial investment for example, and the bureaucracy to start your own company is very easy… at least in Switzerland, but managing the company requires then a lot of book keeping.

Finally, François Wildi shared the various experiences he had over the years, working in academia, at EPFL, in a can factory or at CIR Syderal, an electronic and software company for satellites, passing also by the USA. With his absolutely non linear career path to end up being currently instrument designer at the Observatory of Geneva, one of his main point is that we should keep eyes opened for opportunities everywhere, to discover new worlds. It is also important to be ready to do some sacrifices if we want to stay in a field we like. Sacrifices like salary, or workplace, something Willy Benz also confirmed in private discussion after the event, saying that if you are mobile, then your chance to get a job are highly increased. You don’t know where you will find a position, but you can be almost sure you will find one somewhere. After those five talks and sessions of Q&A, the last activity of the day was the visit of the RUAG company, that some of you may know for its participation to CHEOPS. Aside a basic presentation of the company (did you know that the Swiss Confederation is the only stockholder?), who they are, how many employees do they have in how many countries, or what are their activities, we were able to visit parts of the site in company of Franck Mouriaux, Chief Engineer Spacecrafts. We could see the fabrication of satellite structure panels, the old fashion, with everything done by hand, and the new flavour partly automatised. This new flavour is what Franck Mouriaux call the New Space, Space 2.0 or even Space 4.0 in reference to Industry 4.0.

The various industrial revolutions, the 4th one being the introduction of self decision processes thanks to cognitive computing, cloud computing or A.I.

This New Space has become a necessity for companies of the Space Industry willing to survive. With the arrival on the market of actors such as SpaceX, Blue Origin or Virgin Galactic, the space industry is sliding from a prototype model for each satellite (with eventually 2-3 copies for specific projects), to a mass production model. Amongst the tasks performed by RUAG Space AG in the building of the satellite structural panels, they need to place inserts in the panel, in order to be able to attach the payload. Such inserts are currently placed and glued by hand, with about 15 minutes needed per inserts, knowing a satellite can have up to 2000 or 3000 inserts, leading to the time for the production of a structure of about 2/3 months.

With project such as One Web (aiming to bring WiFi coverage worldwide from low orbit), with 900 satellites (up to 2000+ depending on how the project develops), a shorter production time and lower production cost were needed. To that end, RUAG Space AG is developing new technologies, such as additive manufacturing  (~3D printing), or in the case of our previous example, a machine to automatically place/glue the inserts, at least one per minute. They achieved this goal with something similar to a CNC table with multiple tool heads, paired to a robotic arm, and a new type of inserts specifically developed for that.

I would like to thank again all the participants of this workshop, and all the people who made it possible: The academic platform, RUAG Space AG,  Suzanne Wilde, Matthias Beck and of course all the speakers: Claudia Röösli, François Wildi, José Barbosa, Alessandro Pasetti, Sascha Quanz and Franck Mouriaux. (Thibaut Roger)