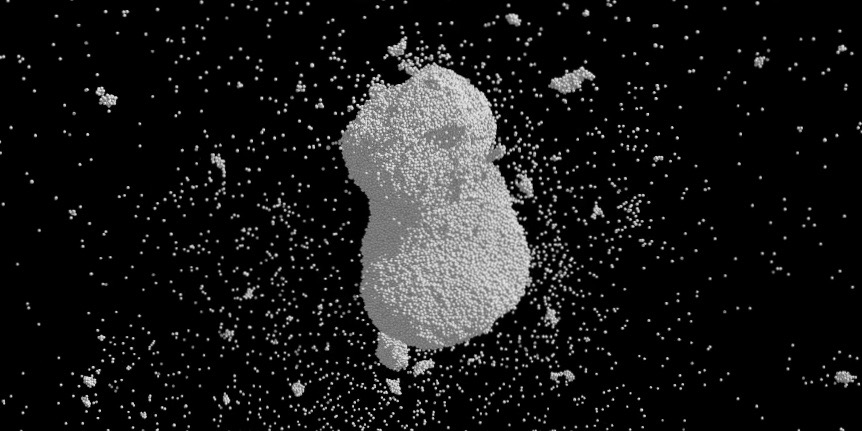 Comets which consist of two parts, like Chury, can form after a catastrophic collision of larger bodies.  Such collisions may have taken place in a later phase of our solar system, which suggests that Chury can be much younger than previously assumed. This is shown through computer simulations by an international research group with the participation of the University of Bern.

In the computer simulations, the research team investigated what happened after two large comet nuclei violently collided together. “The calculations showed that a large part of the material accumulates in many smaller bodies,” explains Martin Jutzi of the Center for Space and Habitability (CSH) at the University of Bern and member of the National Centre of Competence in Research PlanetS. The newly created objects have different sizes and shapes, among them are many elongated bodies, some of which consist of two parts, just like the comet 67P/Churyumov-Gerasimenko, which the University of Bern  studied in detail with the Bern mass spectrometer ROSINA on the Rosetta spacecraft.

“We were surprised that in such catastrophic collisions only a small part of the material is considerably compressed and heated,” says Martin Jutzi. Moreover, this material is then ejected and hardly contributes to the formation of the smaller bodies that form a new generation of comet nuclei. On the side of the comet opposite the impact point, volatile substances can withstand even violent collisions. This is why the new generation of comets still has a low density and is rich in volatile substances – properties which have also been found on the comet Chury. Therefore, the duck-shaped comet may well have emerged after a violent, late collision and did not necessarily have to originate from the early formation phase of the solar system, as has been claimed repeatedly. Such collisions could have taken place relatively late in the life of the solar system. This finding has been reported in the journal Nature Astronomy by the research group led by Stephen Schwartz from the University of Côte d’ Azur and the University of Arizona.

Impact with a velocity of several kilometers per second

In previous studies, Martin Jutzi and Willy Benz, professor at the University of Bern and PlanetS director, had already come to the conclusion that Chury did not receive its two-component structure when our solar system was formed 4.5 billion years ago. The researchers showed that the weak point between the two parts of the comet could not have lasted for several billion years and that Chury may have been created by a comparatively gentle impact. “We have now investigated catastrophic collisions involving a lot more energy,” explains Martin Jutzi. The new calculations confirm the previous results and extend the possible formation scenarios.

The research team investigated what happens when different sized bodies collide at different angles at speeds ranging from 20 to 3,000 meters per second. The simulations showed that small fragments merge into many transient aggregates in the hours and days after the collision (see video). The final shape is often the result of two or more large bodies that collide at very low speeds to form a two-component structure.

According to the simulations, during the days and weeks in which the comet received its shape, small aggregates in the vicinity continue to reaccumulate onto it. In reality, this material could be flattened when it hits the surface and thus lead to a layered structure. Moreover, if large blocks accumulate at this stage, cavities may be created which can develop into large pits. Such geological structures were discovered on Chury by the Rosetta mission – these observations were previously considered mysterious. “Our results not only confirm that the comet Chury may be much younger than previously assumed, but also provide a possible explanation for its striking structures,” says Jutzi.