“Make sure that you are unique” 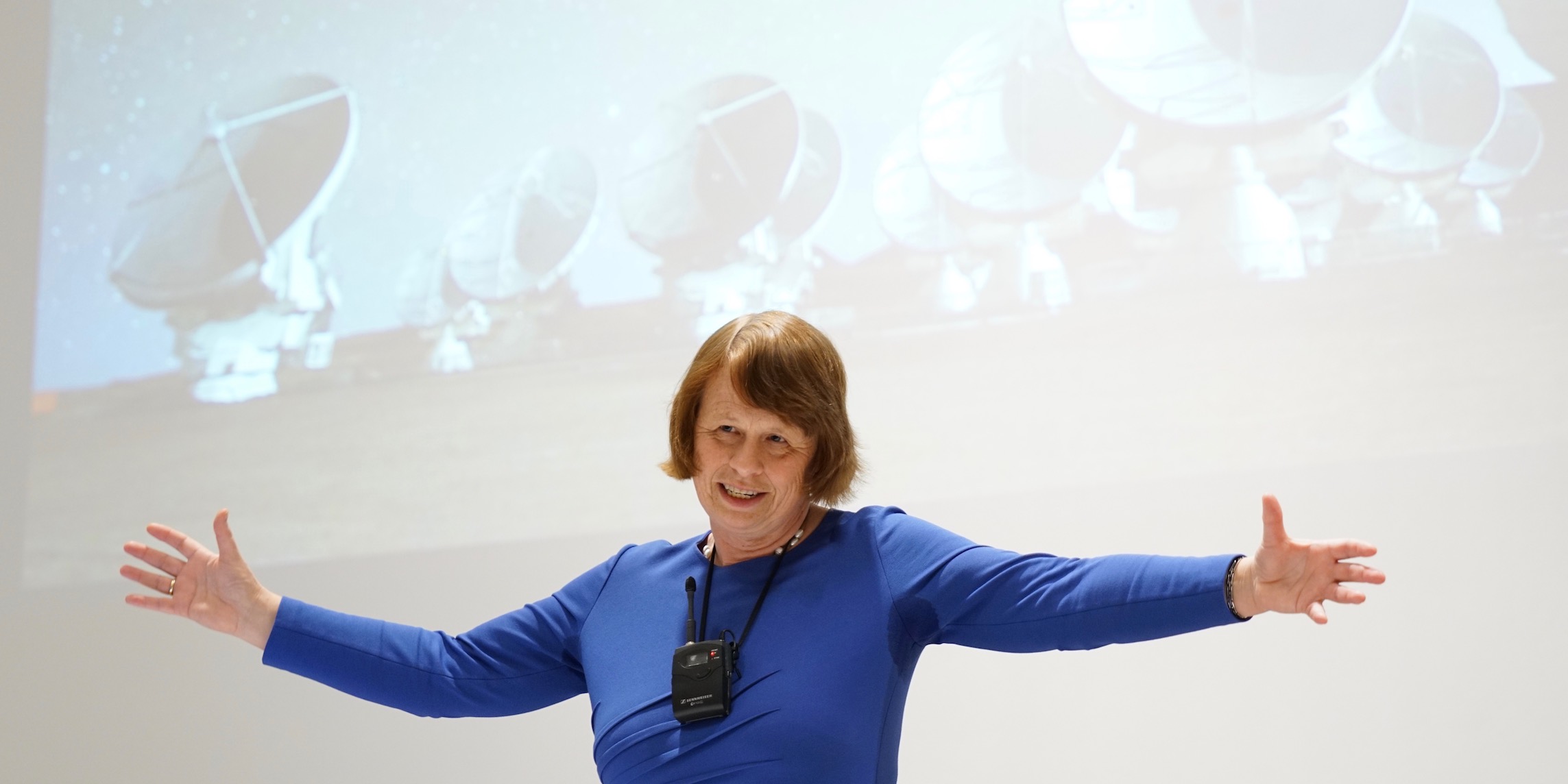 Ewine van Dishoeck is a pioneer in astrochemistry and one of the most famous female astronomers in the world. Invited by the Center for Space and Habitability (CSH) of the University of Bern the Dutch professor gave the CSH Distinguished Lecture 2017, had many discussions with the CSH and NCCR PlanetS scientists and advised the young researchers to take the steepest route in their early career. Ewine van Dishoeck during her lecture at the University of Bern. She was the driving force behind ALMA, the world’s biggest radiotelescope. (Photo Sylviane Blum)

PlanetS: How did the field of astrochemistry develop in recent years?
Ewine van Dishoeck: We had a fantastic set of space missions like Herschel and also of ground based telescopes like Alma. It has really been a rich time for astrochemistry that has led to various discoveries. One topic is how water is formed in space. It combines observation, modelling and laboratory work. That has been a mature step forward.

Now you know how water was formed in space?
Yes, we think that the bulk of water was formed on the surfaces of tiny interstellar grains in space starting from oxygen and hydrogen atoms bringing them together on their surfaces. Then, those bonds are probably being preserved for 4,5 billion years. So, most of the water molecules were already made even before the original interstellar cloud collapsed and planets were formed. Of course, the water molecules have been recycled, they have evaporated and rained down again. But as one of my colleagues said very eloquently: “The earth’s water is older than the sun.”

What is the current hot topic in astrochemistry?
One of the challenges is: How do we make these complex chemical molecules that are now found abundantly in regions where new stars are formed. Can we make them already under very cold conditions without the need for heating? And to what extent are these molecules preserved? You start with a collapsing interstellar cloud, then you form a disk and out of the disk you make the first pebbles and planetesimals and the planets are formed. Do those compositions really reflect still the initial cloud conditions or has the chemistry been reset, ‘en route’ from cloud to disk?

Why did you choose astrochemistry as your field?
It’s one of these non-standard stories that shows that sometimes your career depends on very unexpected things. I was a master student doing theoretical quantum chemistry and I really wanted to continue in that area. But the professor had just died and so, I couldn’t do a PhD. At that time, my then-boyfriend and now-husband who was studying astronomy had just taken a course on the interstellar medium. “These interstellar molecules, isn’t that a topic for you?” he asked and so I started looking in it in more detail. Then, the world’s expert in this field, professor Alex Dalgarno invited me to Harvard. I could see immediately the potential of interstellar space as a unique laboratory to do chemistry. So, that was a good match and finally funding was found for me in the Netherlands to do my PhD there. You have to grab those opportunities when they come along. You are president-elect of the International Astronomical Union (IAU). Your husband Tim de Zeeuw has been director general of ESO for 10 years. So, you are the power couple in astronomy.
I don’t think that it is the power that is important. It is more that you are in a position indeed to help steer astronomy in the right direction, at least what we think is the right direction, hopefully for the better of all of astronomy. Of course, you listen to a lot of people. And there are a lot of discussions that go into that. But at some stage you have to go in a certain direction. And you use your best basic instincts as to what that right direction is.

There doesn’t seem to be much controversy in astronomy.
So far, the astronomy community has been very much united on the goals that it wants. And it has also been a rich period, not only rich in scientific results, but also rich in facilities in space and on the ground. We have to realize that other fields like life sciences are catching up in that respect. They also need more and more big facilities for their research. I think astronomy should not stay too isolated, but reach out to larger communities and make connections with the other fields. Of course, that is already done here in CSH with geology, chemistry, biology. That’s the way the scientific landscape is evolving.

What are you doing besides your scientific work?
My husband and I have an exciting, rich life that we enjoy together. We have an extended family across the entire world in terms of our scientific friends. I like the fact that when I land somewhere in a city across the world, there is somebody there that I know I can have dinner with and feel welcome. We love sports, we love reading, and we always go camping for two weeks in the United States, somewhere in a national park or forest far away from everything. That’s when I really close my laptop.

You are one of few female professors in astronomy. What could be done to have more women in higher positions?
I have never been an advocate of having positions that are specifically created for women. But at the PhD and postdoc level there are many good women. I think we have to be proactive in looking for good female candidates and in making sure that they stay in science and go for the highest positions. Programs that help women in bridging childbearing years would help a lot. Some of that has been frustratingly slow. A lot of it depends also on building up  enough confidence, which some of our male colleagues have, and this also takes time. Extending fellowships by 1-2 years can really help to strengthen the CV.

Do you have a special advice for young female researchers?
A famous professor at Princeton told Tim and myself: “Early in your career, take the steepest reach. Make the sacrifices.” We decided that the best for the two of us was that I accepted a fellowship in Harvard, Tim in Princeton. So, we had to commute for 2,5 years which we didn’t like at all. If you take this steep route in your early years – to your best abilities obviously – that helps you that you are more in the driver’s seat as to where you can go, you have many more choices. What else should young researchers consider?
Make sure that you are unique, that there is one thing you do very well that people recognise you, don’t try to broaden yourself too early. You need to have this recognition that people can identify you with a certain topic or result. And then, make sure to tell that story to the world. Don’t sit in your office and expect the world to come to you.

You were a driving force behind Alma, the Atacama Large Millimeter/submillimeter Array, the worldwide biggest radio telescope composed of 66 antennas at 5000 metres altitude in Chile…
…together with 1000 other people. Because I have been in the US for 6 years, the US put me on their scientific advisory committee together with one other European. This was a wonderful way to make bridges between the US and Europe. The US wanted to have lots of small dishes to have better imaging quality, the European version wanted to have many larger dishes for sensitivity. Neither was fully affordable. So, we said let’s bring it together and build one powerful array that has enough dishes for good imaging. The concept of the US side had 8 meter dishes, the European side 15 meter dishes and at it end it became 12 meter dishes. Now everybody is happy, the quality of the data is amazing, better than we expected. But it is so popular, that it is difficult to get time for observations.

You are a very busy scientist. Why did you accept the invitation of the Center for Space and Habitability (CSH) of the University of Bern?
I enjoy lecturing and making bridges between different fields. My background are interstellar clouds and disks at the very first stages of planet formation. Connecting planetary system formation with the field of exoplanets as it is studied in Bern is one of the most important new areas in astronomy. Talking with many people here will hopefully cement the links that we are now starting to make between these different fields. And then, there is the incredibly exciting work of the Rosina team that determines the chemical composition of cometary material with an unprecedented level of detail and precision. Both, the exoplanets and Rosina, makes it doubly exciting for me to be here.