Home  ›  Internal Newsletter  ›  Getting ready for a tricky task

Getting ready for a tricky task 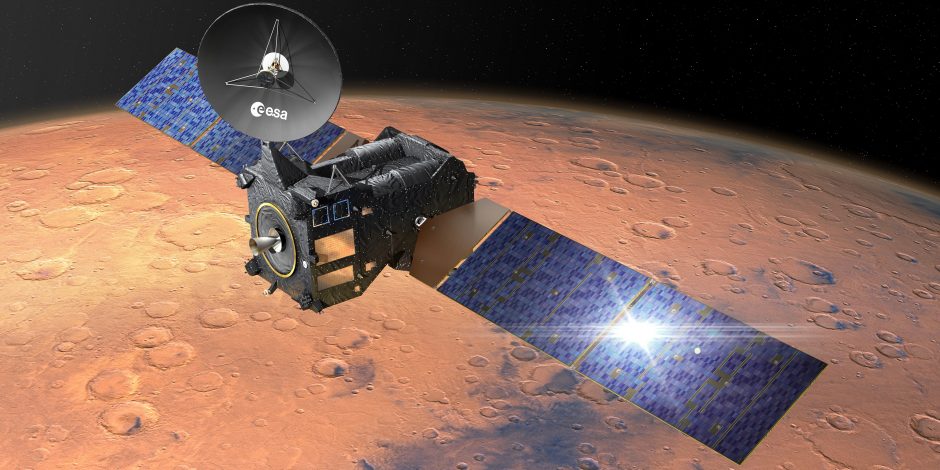 After ExoMars TGO has reached its Mars Capture Orbit, the intention is to switch on CaSSIS in the week from November 21 to 28 and acquire images of Mars for the first time. A media release is planned on 1 December 2016 when ESA’s Ministerial Council is being held in Lucerne. There was quite a bit of confusion in places about what happened during the ExoMars encounter with Mars on Wednesday 19 October. So let’s just try to clear that up.

Firstly, the mother spacecraft, the Trace Gas Orbiter, fired its main engine on time, passed behind Mars on schedule and the signal was reacquired at almost exactly the predicted time. This indicated immediately that TGO was in orbit and in good health. A few hours later, ESOC in Darmstadt produced a calculation of the orbit which indicated that the spacecraft had performed perfectly within the tolerances expected for a 2 hour burn. The payload was switched off and will remain off for the next 4 weeks. Hence, CaSSIS should be perfectly OK and ready to work. The orbit is currently highly elliptical (around 300 km x 95000 km) with a period of just over 4 days. It is also roughly equatorial.

So what about the lander? We know that Schiaparelli entered the atmosphere and its heat shield functioned well. The parachute was deployed. However at about 50-60 seconds before the scheduled landing, the parachute detached and the retro rockets fired. This firing went on for only a few seconds before they were shutdown. Estimates are that Schiaparelli dropped from a height of between 2 and 4 kilometres, therefore impacting at a considerable speed, greater than 300 km/h, resulting in its loss. Why exactly it did that is not (at the time of writing) known. You can speculate on lots of things (like software errors or the altimeter not working correctly, etc. etc.) but ESOC have telemetry to study and will, I am fairly sure, find out.

And what happens next? We have received orbit data from ESOC, Darmstadt. Using this data we can plan our observations from this orbit (called the Mars Capture Orbit or MCO). The intention is to switch on CaSSIS in the week from November 21 to 28 and acquire images of Mars for the first time. The highly elliptical orbit is not ideal. When we approach Mars, the orbital speed is much higher than in our science orbit and the timing will be difficult to get right. Our aim is to get something – we do our best – and learn from what we get. The imaging commands are sometimes quite simple. Here is an example showing us switching off the rotation motor and taking an image.

These commands are translated by ESOC into the HEX commands understood by the instrument before being radiated to the spacecraft. The difficult part is getting the timing right. When should the image be acquired, do we have enough time to rotate the instrument to get the 2nd half of a stereo pair, do we have enough time to get the data out of the instrument before the next image should be acquired? That planning process costs a lot of time and we don’t have many people to help do it. The hard part in MCO is that the speed over the surface at periapsis is much quicker than in the circular orbit so there is a good chance to mess it up.