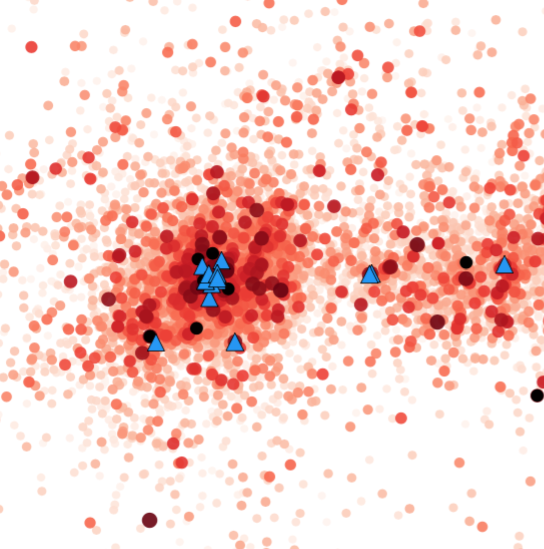 The early phase of star and planet formation can be very violent. Usually, dozens, hundreds, or even thousands of stars are born closely together in a huge cluster environment. And around each of these stars young planetary systems form from a gas and dust disk — also the Solar System went through this early phase of stellar and planetary formation. The newly formed cluster with its hundreds of stars and forming planetary systems is a very dynamic environment: stars in the surrounding can be close (in interstellar scales). As there are so many stars around it is quite likely that low-mass stars like the Sun are initially very close to massive stars. These can evolve very quickly — on the order of a few million years– and end their lives in a majestic supernova event.

In a new interdisciplinary study PlanetS researchers from ETH Zürich modelled the process of the dynamic gravitational interactions of stars in such newly born clusters and mapped the interaction of the supernova ejecta fronts with the surrounding young planetary systems.The figure below shows the evolution of such a star forming region and the distribution of the massive stars during their lifecycle.

Evolution of newly born stellar cluster with 10000 stars. Low-mass stars (like the Sun) are shown in red, massive stars which will go supernova at some point are pictured in blue. As time progresses more and more of the massive stars go supernova and pollute the young planetary systems in their surrounding. The video at the bottom illustrates the dynamics and the expulsion of the supernova ejecta for a timespan of 10 million years.

They found that many young planetary systems are not influenced by the interactions with the supernova ejecta, as the disks from which their planets form are already gone by the time the ejecta reach the system. However, some 10–30% of systems are heavily polluted by the ejecta and newly fused material from the stellar interiors are injected into the system. This can have dramatic consequences for the early phase of terrestrial planet formation, as we know from studies of our Solar System. Parts of the material injected into the young planetary systems are extremely short-lived radioactive isotopes. These emit so much heating that they can melt the entire interior of small planetesimals and embryos during the first few million years of planet formation and may thus influence internal geologic processes like core formation or lead to degassing of water from the planetary body.

Future efforts will seek to better quantify the effects of these short-lived radionuclides on the internal evolution in order to understand their link to terrestrial planet formation and the volatile inventory of Earth analogues.