Home  ›  CHEOPS  ›  The most stable source of light

The most stable source of light 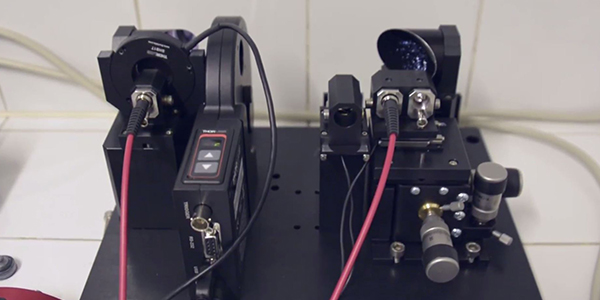 To test the accuracy and stability of the CHEOPS photometer, a light source with a variability of less than the 20 ppm is required for the satellite. Since this type of source does not exist on the market, a team of engineers and technicians of the NCCR PlanetS and the University of Geneva has developed a light source with an unknown stability to date, 2 ppm for a 60 seconds laying.

Unlike other technologies where the source itself is stabilized, the system which was finalized in Geneva uses a feedback loop to change the intensity of the incoming beam (Figure 1).

A stability such that the University has deposed a european patent for the system in August 2015. “We presented our instrument to the US group responsible for the TESS mission (Transiting Exoplanets Survey Satellite, to be launched on 2017). They were so interested that they asked us to build them a copy,” said Francois Wildi member of PlanetS and designer of what has become the most stable source of light in the world. A source that is already used to test the stability of the CCD photometer CHEOPS.

“CCD tests are time consuming and require the analysis of a huge amount of data; since the beginning of the measurements more than 4 TBytes have been stored,” explains Michaël Sordet, engineer in charge of the tests. The procedure had to be developed, and then to be tested with two EM (Engineering Model) before testing the three FM (Flight Model) supplied by the manufacturer. “Once the CCD is chosen we will move to Bern to test it in flight conditions,” said the electronics engineer. The CCD will be plunged into the vacuum tank which is located in the clean room of the University of Bern and subjected to temperature variations that can meet CHEOPS in space. (pb)

In this video we can see the whole mechanism, the shutter, the finger, the filter wheel and the stabilized beam.