How comets were assembled 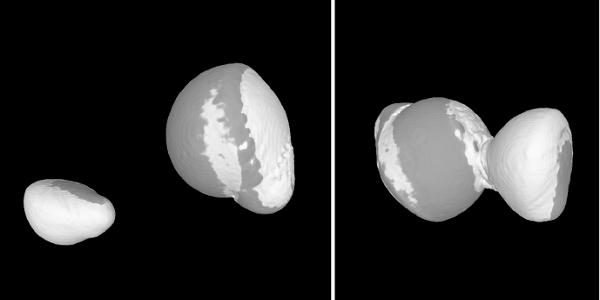 Rosetta’s target «Chury» and other comets observed by space missions show common evidence of layered structures and bi-lobed shapes. With 3D computer simulations Martin Jutzi of PlanetS at the University of Bern was able to reconstruct the formation of these features as a result of gentle collisions and mergers. The study has now been published online in the journal «Science Express».

In a video sequence based on a computer simulation two icy spheres with a diameter of about one kilometer are moving towards each other. They collide at bicycle speed, start mutually rotating and separate again after the smaller body has left traces of material on the larger one. The time sequence shows that the smaller object is slowed down by mutual gravity. After about 14 hours it returns back to reimpact a day after the first collision. The two bodies finally merge to form one body that somehow looks familiar: The bi-lobed frame resembles the shape of comet 67P/Churyumov-Gerasimenko imaged by ESA’s Rosetta mission.

The simulation is part of a study published in «Science Express» by Bernese astrophysicist Martin Jutzi and his US colleague Erik Asphaug (Arizona State University). With their three-dimensional computer models the researchers reconstruct what happened in the early solar system. «Comets or their precursors formed in the outer planets region, possibly millions of years before planet formation,» explains Martin Jutzi. «Reconstructing the formation process of comets can provide crucial information about the initial phase of planet formation, for instance, the initial sizes of the building blocks of planets, the so-called planetesimals or cometesimals in the outer solar system.» About 100 simulations were performed, each one taking one to several weeks to complete, depending on the collision type. The work was supported from the Swiss National Science Foundation through the Ambizione program and in part carried out within the frame of the Swiss National Centre for Competence in Research «PlanetS».

67P/Churyumov-Gerasimenko isn’t the only comet showing a bi-lobed shape and evidence for a layered structure. Crashing on 9P/Tempel 1 in 2005, NASA’s Deep Impact showed similar layers, a feature that is also presumed on two other comets visited by NASA missions. Half of the comet nuclei that spacecraft have observed so far have bi-loped shapes among them comets 103P/Hartley 2 and 19P/Borelly. «How and when these features formed is much debated, with distinct implications for solar system formation, dynamics, and geology,» says Martin Jutzi.

Primordial remnants of a quiet phase

In their study the researchers applied 3D collisional models, constrained by these shape and topographic data, to understand the basic accretion mechanism and its implications for internal structure. As their three-dimensional computer simulations indicate, the major structural features observed on cometary nuclei can be explained by the pairwise low velocity accretion of weak cometesimals. The model is also compatible with the observed low bulk densities of comets as the collisions result in only minor compaction.

«These slow mergers might represent the quiet, early phase of planet formation, before large bodies excited the system to disruptive velocities, supporting the idea that cometary nuclei are primordial remnants of early agglomeration of small bodies,» says Martin Jutzi. Alternatively, the same processes of coagulation might have occurred among debris clumps ejected from much larger parent bodies. Along with future space missions using radar to directly image internal structure, the 3D computer simulations are an important step to clarify the question of how the cometary nuclei were assembled.

M. Jutzi, E. Asphaug, «The shape and structure of cometary nuclei as a result of low velocity accretion», Science Express, 2015

Collision of two icy spheres with a diameter of about one kilometer. After a first impact the bodies separate and reimpact a day later.