Baby-planets around a nearby star 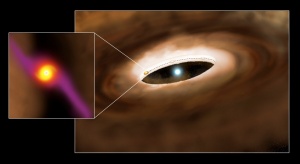 This graphic is an artist’s conception of the young massive star HD100546 and its surrounding disk. Image Credit: P. of Marenfeld & NOAO/AURA/NSF

An international team including ETH scientists has discovered for new evidence that planets are forming around a  star about 335 light years from Earth. The team found emission from carbon monoxide molecules system strongly suggesting a planet is orbiting a relatively young star known as HD100546. The candidate planet is the second that astronomers have discovered orbiting the star. More information can be found Web in the official press release  from Clemson University.