134 members and associates gathered from 27 to 29 January 2020 in Montreux to present and discuss their research projects, establish contacts between the different institutions in Bern, Geneva and Zürich, and talk about new ideas at the annual NCCR PlanetS General Assembly. With loud, enthusiastic applause the PlanetS scientists acknowledged the news on the morning of their last meeting day that the cover of CHEOPS was successfully opened. “It’s a big relief, of course,” said David Ehrenreich, CHEOPS project scientist at the University of Geneva. The successful launch of the space telescope was certainly one of the main highlights of PlanetS in 2019 together with the award of the Nobel Prize to Michel Mayor and Didier Queloz who both attended the 6th General Assembly of the NCCR in Montreux.

Didier Queloz, chairman of the scientific team of the CHEOPS mission, emphasized the advantages of the new space telescope. Although it is small, during its nominal lifetime of 3.5 years there will be a lot of orbits and therefore a huge amount of telescope time: 22’000 hours for the Guaranteed Time Observing (GTO) Programme, which is under the responsibility of the CHEOPS Science Team. “That’s really a lot,” stated Didier Queloz, “and it is very challenging to assemble the programme.”

Michel Mayor, member of the PlanetS advisory board, congratulated the NCCR to its great success in stimulating the contact between the different institutions in Bern, Geneva and Zürich in working together and developing synergies. With Catherine Cesarsky, former director general of ESO, this year a new member has joined the advisory board, which besides Michel Mayor also includes Nobel Prize winner Brian Schmidt.

The research of PlanetS is grouped into 3 domains. Domain 1 covers the early stages of planet formation. “All projects are working in the same field with the same objective but with very different methods,” Antoine Pommerol, coordinator of domain 1, summarized and emphasized the collaborative competence. “It is very nice to see that despite having astronomers, physicists, geologists, experimentalists, theoreticians together we managed to discuss very effectively and there are many results coming out of these collaborations. So, domain 1 works extremely well as an integrated meta project.”

In domain 2 planetary systems architectures, formation, and evolution are studied. “In our session we experimented with a new form of interaction called speed dating,” François Bouchy, coordinator of domain 2, reported. At four parallel working group tables the scientists were brainstorming about topics linked to domain 2. At each table a coordinator presented a topic in a single printout that was discussed during 12 minutes. The new format was very well received by the participants. “I loved speed dating, I didn’t think that it will happen to me,” Catherine Cesarsky joked.

Domain 3 consists of 4 NCCR projects and 4 externally founded projects dealing with atmospheres, surfaces and interiors. “It is characterized by a large diversity because we are studying extrasolar planets and solar system objects using quite a number of techniques,” explained Christophe Mordasini, coordinator of domain 3. “But there is a lot of common interest, because it is all about characterizing planets and minor bodies as complex dynamical and evolving entities consisting of an interior, a surface and the atmosphere.” A lot of high-impact publications including some about ultra-hot Jupiters and planets around ultra-cool dwarfs prove that PlanetS research is on the top of what is going on in the field. 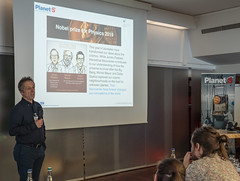 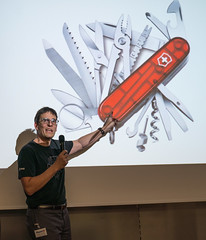 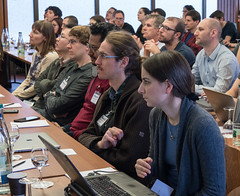 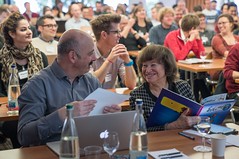 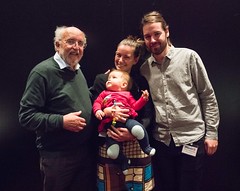 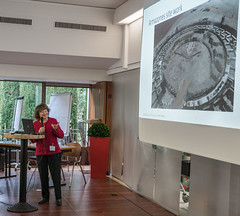 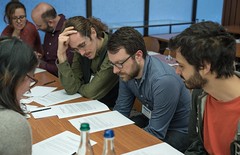 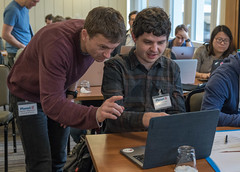 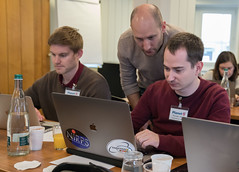 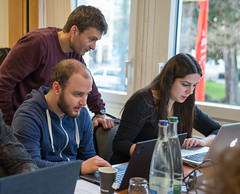 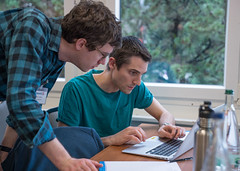 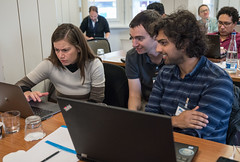 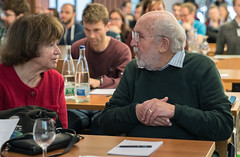